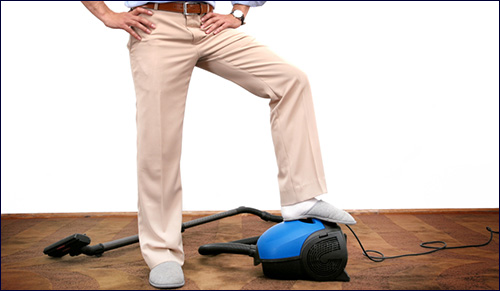 As a husband, I’m pretty helpful around the house. But vacuuming…”hate” is not a strong enough word.

Nobody likes housework, because it’s hard and dangerous. Most housework involves sticking your head in the oven or kneeling down in the filthiest, most germ-infested parts of your house and spraying poison into the air, and then scrubbing and scrubbing until you’re breathing it in as heavily as possible.

I even hate the word vacuum. Two U’s? Seriously?

But the thing that I dislike most, of all the different parts of cleaning, is vacuuming. I even hate the word vacuum. Two U’s? Seriously? I understand how vacuuming is better than what we had to do in the olden days, which was go outside and beat the carpet with a twig, and I also realize that it’s better than the very first vacuum cleaner, which was horse-drawn, and when you turned it on, the horses would get scared and drag you down the street by the hose. But I don’t understand why, with all our advances in technology, vacuum cleaners still make that noise. It’s like having a chainsaw or a jackhammer, but INSIDE YOUR HOUSE. And why does it still weigh as much as our hot water heater?

I also don’t like how the wires get into moods. First it’s a hundred feet long, and then, when you want to move into the next room, it suddenly decides that it’s only four feet long. And of course you don’t want to keep unplugging it every time you switch rooms, because the cord will just snap back and hit you in the shin, so you just keep the unit where it is and try to reach as far as you can into the next room with the stick. That’s good enough.

It’s also very annoying how you can clean a whole room, and then there’s one little piece of paper that the vacuum just refuses to pick up. So you keep running the unit back and forth over it, back and forth, until you finally give up. So you bend down, pick up the paper, and feed it into the bottom of the vacuum cleaner.

The other problem with vacuum cleaners is that they’re designed to be powerful enough to pick up stuff that they’re really not supposed to pick up. They can suck up a plastic bag, or your drapes, or any toys that your kids left on the floor. You’re going along, and you come across a loose screw, and you figure, I’m not going to go around it. And if I was going to bend down to pick up every inappropriate thing I don’t want to vacuum, then why am I vacuuming in the first place? I could just get down on the floor and pick things up manually!

So you just vacuum the screw, and you hear it going up the hose, CRACK CRACK CRACK. Then you see a single sock on the floor. You should probably go around – SLURP! Never mind.

And then you come across a string. Look, a string on the floor! So you start vacuuming the string, and then you find out, after about a minute of vacuuming the same string, that it’s really attached to something bigger, such as your blanket, or the edge of the carpet, which is slowly unraveling, and you’re about to lose your entire carpet into the vacuum one strand at a time. So you panic and try to pull the string out, fighting the vacuum, until you smell something burning, and your vacuum stops picking things up. So now you have to open up the bottom, and the whole house is filling up with dust that you already vacuumed, and now you can’t vacuum it again because the unit doesn’t work. And while you’re at it, you figure maybe it’s the hose, so you peer deep, deep into the hose, and you put it to your mouth and blow, because whatever the vacuum cleaner wasn’t able to suck up, with its powerful engine that can swallow a small animal, you’re going to be able to dislodge with the power of your breath. And when that doesn’t work, you try sticking a broomstick in there.

I don’t vacuum a whole lot, because our vacuum cleaners never like me. We just have the worst luck with vacuum cleaners. We’ve had countless units over the years, and at any given point, our vacuum isn’t working properly. Sometimes the belt melts off, sometimes the broomstick gets stuck in the hose, and a few months, ago, the first time I vacuumed after Passover, I couldn’t understand why everything I vacuumed was flying all over the house until my wife pointed out that I’d forgotten to put in a new bag. Sure, we can go out and buy a really expensive unit, but we’d probably just vacuum up a sofa cushion or something.

Or maybe we should buy a Roomba. A Roomba is a small vacuum that has a motor in it, so that it can roam around your house and bump into walls and eat things off the floor, sort of like your toddler. But the great thing about the Roomba is that you can turn it on and leave your house, and by the time you come home, it will have cleaned your floors and made supper and done your laundry. Okay, that’s not true. Your laundry will be missing, and the Roomba will be smoking and making weird beeping noises. And you’ll have to buy a new belt.

But Roombas can definitely save your life. I have here a November article from an Israeli newspaper about a poisonous snake that came into a house in the Galil while the family was out, and was sucked up by their Roomba. When the family came home, they found their Roomba beeping wildly, so they opened it up to find the deceased snake wrapped around one of the brushes. Now what I would have done, and I suppose many of you would have done the same, is shriek like a little girl and throw the Roomba out the window. But the family had the presence of mind to take pictures and contact the company, who for some reason is sending them another vacuum cleaner. So it turns out that vacuuming had saved their life.

So I was thinking that maybe we should buy a Roomba. It’s small, so we can kick it under our sofa when company comes, and we can have it roll around the house all day and disturb my writing process. And maybe it will vacuum up our field mice. Yes, we have the occasional field mouse come into our house, always the same time of the year, presumably to get inside for the winter. Or maybe it’s because our housework is that bad.

But it’s only the Roomba that can save you from terrifying creatures. In September, an 85-year-old man in Phoenix tried to use his vacuum on a hornet’s nest, and he was stung hundreds of times. Of course, the problem is that hornet’s fly, and it’s very hard to suck them out of the air once they hear you coming. I do wonder, though, what his plan was for emptying the vacuum cleaner bag.

So after reading these articles, I went downstairs to have another go at my vacuum cleaner. I opened the bottom and peered inside. I guess I was hoping that there’d maybe be a snake in it. That way I can say, “Oh, there’s the problem. There’s a snake in it.” And then I’d go to shul and bentch gomel. But I didn’t find a snake. What I found was a massive strand of hair that was probably miles long. I don’t know what kind of tremendously hairy being they came from, but I am glad my vacuum scared it away.

Goyish Vs. Jewish, Part 2
In the Shadow of David and Goliath
Where Do the Laws of Nature Come From?
Saadiah Gaon, Rashi and Maimonides: How Three Rabbis Revolutionized Judaism
Comments