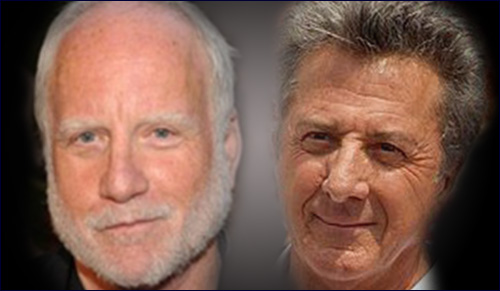 If Dustin Hoffman, Richard Dreyfuss and Henry Winkler are now playing Zadies what does that make me?

Most people relate in some way or another to the stars of their generation. I've no doubt that 18-year-olds today are constantly sizing themselves up in terms of the way they look and act compared with Miley Cyrus and the Biebs, just as our parents saw themselves in light of the likes of Cary Grant, Bette Davis, or Clark Gable.

The same is true with us Boomers. That's why it comes as a bit of a shock to realize that we have reached a point in the evolution of the Baby Boomer generation when Dustin Hoffman, Richard Dreyfuss, and Henry Winkler are all playing Jewish grandfathers.

“Look at him! I look way better, don’t you think?”

And it's true. The formerly transplendent “him” now sports sunken eyes, sparse hair, and skin so wrinkled you feel like taking a damp iron to it.

Either you have a spouse who loves you muchly or one who is very nearsighted if you do not then hear the golden words "How do you think you look, jerk?!"

There may be countless stars of yesteryear against whom we may measure ourselves, and hopefully your favorite is someone who really does look worse than you, but there are very few more prominent than the aforementioned three. Think of it: the young shark hunter from Jaws, The Graduate, and Fonzie himself schlepping around in plaid pants complaining about constipation, why grandkids never call, and how much they love the early bird specials if you can just get there before 5:30.

Richard Dreyfuss always radiated a youthful exuberance on screen from the days he actually was young in American Graffiti and The Apprenticeship of Duddy Kravitz and on into his many more mature roles. He began to look old for his age even then, but there was always that brash self-confidence that seemed young and vital no matter how much hair he lost or how gray the rest of it became. Few of his roles better captured the spirit of Richard Dreyfuss on screen than Close Encounters of the Third Kind and Jaws, in which he battled a man-eating beast with teeth a foot long and sharp as razors.

Nowadays Richard Dreyfuss is more likely to be seen in a role with teeth in a glass rather than in the mouth of a marauding monster.

Nobody was bigger on television in the 1970's than Arthur Fonzarelli, except maybe your Aunt Tessie when she fell on top of the Zenith and crushed the rabbit ears. Henry Winkler played the Fonz as the bad boy with the heart of gold while simultaneously reinforcing the bond that many feel exists between Jews and Italians, demonstrating effortlessly how a Jew can aptly play an Italian and often vice versa. Quintessential Fonzie: at the mirror all set to comb his greasy mane and suddenly flinging his arms aside realizing that one cannot top perfection.

Nowadays if Henry Winkler, who has not only played granddads but starred in his own reverse mortgage commercial, were to fling his arms aside at a mirror he could well separate a shoulder. Be careful Fonz.

You'd have to have been an older Boomer in the late 1960's to understand how The Graduate was the youth movie of 1967. Here was a pre-long hair depiction of youthful alienation from American culture and values that struck a chord with late teens and twenty-somethings back in the day. Dustin Hoffman played the role as a befuddled but appealing every-kid buffeted between uncertain messages from a well-meaning neighbor's "Go into plastics" to a not-so-well-meaning Mrs. Robinson.

Dustin Hoffman, of course, went on to one of the most distinguished careers in the modern history of motion pictures, but how do young people see him today? As Ben Stiller's Dad and granddaddy of Ben Stiller's brood in Meet the Fochers and Little Fochers.

I suppose we of Baby Boomer era should be happy when we see Dreyfuss, Winkler, Hoffman and others like Albert Brooks and Billy Crystal – though now cinematic zaydes all – still active, sometimes starring, and for the most part going strong. And the good news? We are too.

Of course, hah, look at them!

Green Eggs and Matzo Brei
Were Adam and Eve Jewish?
How I Learned to Love the Multiverse
10 Big Jewish Inventions
Comments