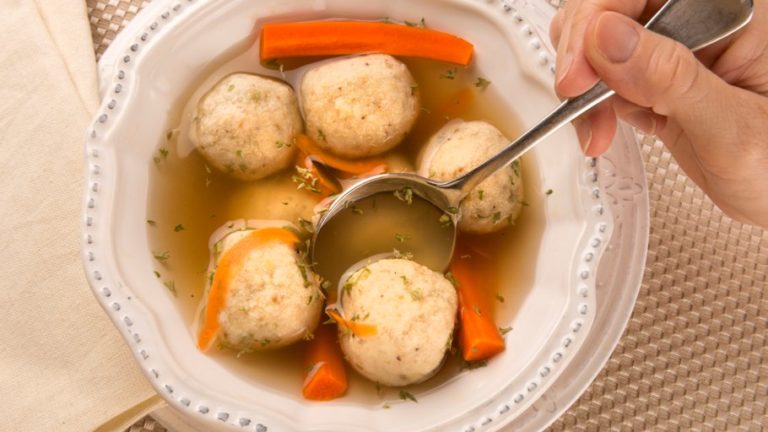 It usually is not a good idea to put a ball in a bowl of soup. There is, however, one notable exception to this rule. It is the venerable, reliable and unmistakable matzah ball, the one ball that Jews routinely submerge in their soup.

Without the matzah ball, matzah ball soup would just be plain old soup but when added to the broth, matzah balls add a hearty punch and sort of put the “chow” in chowder. Many times matzah balls hog the spotlight and steal the thunder away from whatever else might be in the pot. Carrots and celery don't stand a chance, receiving secondary billing like a B-list actor in a star-studded flick. Similarly, when matzahs ball are added, the noodles become irrelevant and invisible, like a mediocre kids choir performing behind Luciano Pavarotti.

Matzah balls (in Yiddish, kneidlach) are akin to dumplings and normally are made of eggs, water, oil and matzah meal. That last ingredient is sort of a misnomer because matzah meal is not really a meal. It’s what happens when you pulverize matzah into smithereens and then brilliantly market it as a separate product. If you have a matzah and a mallet, then you can make your own matzah meal in under five seconds. That said, making matzah balls actually takes dexterity and experience and to make memorable matzah ball soup, one must be the consummate consommé cook.

How was the matzah ball itself invented? Could it have been an accident? Did some klutz drop a piece of matzah on the counter, accidentally spill water on it and then, while spastically attempting to scoop it up, roll the soggy mess into the first matzah ball ever assembled? Such a scenario seems improbable but then again, perhaps other types of food also are pleasant accidents. For example, was hummus created when someone accidently stepped on a chickpea? Discuss.

How did matzah ball soup come into existence? We simply do not know. The concept of soup, however, traces back to biblical times.

The first recorded bowl of soup in Jewish history might be the one that Jacob traded to Esau and which could be referred to as the “birthright broth.” Many scholars describe it as lentil soup (or stew) and it actually is discussed in the Talmud: “On that day Abraham our forefather passed away, and Jacob our forefather prepared a lentil stew to comfort Isaac, his father, as it was customary to serve mourners lentil stew.” (Bava Batra 16b) The Talmud goes on to explain the significance of the lentil, noting that “just as th[e] lentil has no mouth, i.e., it does not have a crack like other legumes, so too a mourner has no mouth, that is, his anguish prevents him from speaking.” (Id.) In addition, “just as th[e] lentil is completely round, so too mourning comes around to the inhabitants of the world.” (Id). In contrast, a matzah ball, like the surface of the moon, has all sorts of cracks and craters and because it is haphazardly shaped by hand, the matzah ball is seldom completely round. For these reasons, you should not serve matzah ball soup to a mourner. You also should not serve matzah ball soup to anyone intravenously because it likely will clog the IV tube.

Matzah ball soup arguably has biblical roots too because its key ingredient, matzah, obviously does. (See Exodus for further details.) That said, when the Jews were hurrying to leave Egypt, they probably were not carrying bowls of matzah ball soup. If that were the case, then the Jews surely would have been careening out of Cairo while yelling “Hot soup! Hot soup! Get out of the way! Hot soup!” You will not find that mentioned in the Haggadah. Not even in a footnote. For the record, you also will not find in the Haggadah any references to macaroons, mandel bread or sugar-coated fruit jelly slices.

Final thought: Too many cooks spoil the soup and too many matzah balls in the soup spoil your appetite.

Entenmann Bar Mitzvah
Bechukotai 5782: Divine Retribution
Behar 5782: Working to Live or Living to Work?
The Wholeness of Being Broken
Comments
MOST POPULAR IN Funny Stuff
Our privacy policy