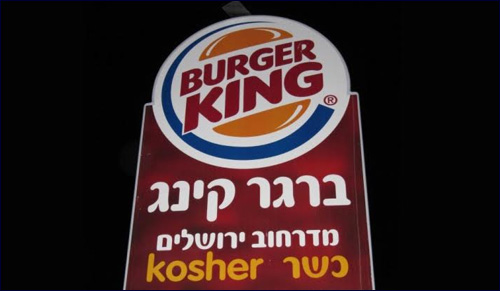 The reason I moved to Israel is for kosher food.

The following are reasons for Aliyah as I have heard from many people over the past 10 years:

Idealism, Torah, alimony, unemployment, lost all my money on Jewish day school tuition, free healthcare, lost your job, never want to work again, fraud, murder, arson, arrest, Argentina, Europe, Obama, Trump, working as an illegal alien for too long, the Jewish homeland, taxes you have to report and will not, Israeli women, Jewish men who do the army, the municipality, and ministry of interior.

I love being Jewish and unique, but not when unique means hungry.

These are all very valid reasons. But the reason I moved to Israel is for kosher food. I am American, hence I love food. Food is the backbone of American culture. It is an identity. In America, it is an identity that made me different. Here is the journey of my childhood:

Food in America Made Me Different

Keeping kosher kept me separated from every normal person in society. Growing up in Rochester, NY, “normal” meant not Jewish. I love being Jewish and unique, but not when unique means hungry. Unique would be great if it included a cheeseburger or Tony Roma’s ribs. They say kosher meat is better, healthier; but when I saw those kids smiling, I knew they were lying. Those kids were enjoying their pepperoni pizza. I was never able to share in that joy. Vegetarian pepperoni does not taste like pepperoni. I know that because I never smiled like the non-Jewish kids when my mom threw tofu on the pizza and called it fepperoni. Fepperoni does not go well with cheese.

I Had a Messed Up Sense of Reality

As a kid, I thought eating out meant ‘We are going over to Ben’s house for dinner.’

As a kid in Rochester, you could eat out at Friendly’s. Even so, the regular menu was not for the Jews. I had to ask for the ice cream menu. It would take three minutes for them to realize that I was not going to get a burger. Baffled, they would ask ‘Why do Jews never eat dinner?’ Shocked at the number of Jewish children that were allowed to jump straight into dessert while their parents were present.

Only non-Jewish people can enjoy the delicious hamburgers. Them and the other kids in my class at Jewish day school. These were the same children who could order food from the vendors at the baseball game, because their parents loved them. My understanding of love was any child whose parents allowed them to order peanuts from the snack guy walking around. You see what non-kosher does to children? It gives them a false sense of affection.

Eating at Chuck E. Cheese’s was the worst experience of my childhood. I couldn’t eat. The activity I participated in was not eating. It was watching other kids enjoy themselves while a gigantic mouse would try to make me feel better by trying to get me to eat some pizza. The pizza wasn’t kosher so I ran away from that mutant mouse that was trying to make me sin.

I Was Lied To

Chicago deep dish pizza is enjoyed by many non-Jews. It is huge, thick, and enjoyable. Kosher deep dish pizza is about a millimeter; it has a little bit more crust. That is it. In a society where Jews are second on the food chain, the kosher people lie about what they are serving. I can’t tell you how many times my dad brought me a kosher Rueben sandwich. It was years before I learned that Russian dressing was not cheese. In Israel, nobody ever lied to me. There is no need to lie in Israel. There are so many kosher places that we can finally enjoy the Israel deep dish pizza; as they call it, lasagna.

In America I had no dating life. I couldn’t go anywhere. There was nothing “normal” as a Jew in suburban America. I couldn’t enjoy a night out at TGI Fridays. A date for a religious Jewish couple was shul. I have a vivid memory of a conversation I had on a first date, right before I moved to Israel, where I said, ‘Let’s go hear the rabbi’s sermon.’ We got there and the conversation continued, ‘You sit on that side of the partition; I’ll sit on this side. We’ll talk about the cantor after services. If we are lucky, the sisterhood might put out a nice spread.’ Killing two birds with one stone, she ended up meeting my parents after services. She did not want to go out again.

The only other outing for a Kosher eating Jew in my town was bowling. But nobody respects a man who uses bumpers. I scored over 200 and she still said that she didn’t respect me.

In Israel, I can be Normal

That is why I love Israel. In Israel, I am a normal person. A not hungry regular man. In Israel, everything is kosher, unless you are Ashkenazi on Passover. Then you can’t eat anything. Even still I somehow managed to put on extra pounds over Pesach by compensating for the legumes with Matzah. I found a way to enjoy myself in the country of my people, as a normal non-legume eater. Judging by my holiday pants with the elastic band that has been fully extended, I enjoyed my Pesach without legumes.

Kosher Burger King is the real reason I moved, even if it is now Burger Ranch. It was my first interaction with redemption. I remember standing in line, staring at the menu. It was on the wall. It was huge, which meant exciting. I felt the final presence of the messiah at our doorstep. The pangs of the redemption. All the years of persecution and cheeseburgers were over. We have a menu on the wall. I first asked for the hat. I felt like a king. I had the crown of the Messiah on my head. A cheap date, a hamburger, no tofu, no salad, and high cholesterol levels. I was finally normal. I saw children smiling with parents who loved them and no giant mouse. There I was, a happy, normal 25-year-old kid, without a second date. She didn’t enjoy the idea of wearing the messiah’s Burger King crown.

Like any normal man, I now enjoy my fast food, with legumes. And then washed it down with pareve ice cream.

That’s why I moved to Israel.

You Think You're Sick?

Prescription Water
Korach 5782: Visit to Lift the Spirit
That Time The Ivy League Found A Way To Limit Jewish Enrollment
Would You Rather Be Right or Happy?
Comments
MOST POPULAR IN Jewlarious
Our privacy policy