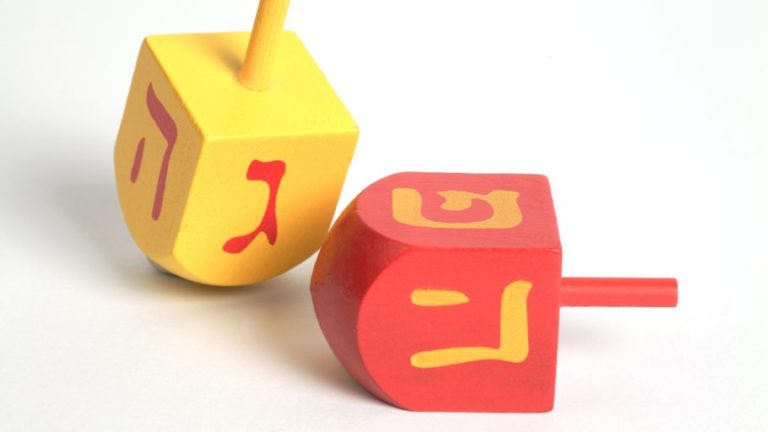 This is how I roll.

Who buys a dreidel? They just magically appear in your home, like friends of your kids. (“I’ve been home all day. How long has this kid been in our basement?”)

Who buys a dreidel? Don’t they just magically appear in your home, like friends of your kids.

But I assume you know the basics: You spin the dreidel, and then everyone sits there and waits for it to fall off the table. Then you crawl under the table and squint at the letters, which, on most dreidels, are helpfully the same color as the rest of the dreidel, and announce what it says, from under the table, unless it’s a gimmel, in which case no one believes you and they all have to come under and check.

Based on which letter is facing up, you do one of the following actions:

Gimmel: You get the whole pot. You’re also allowed to perform a short victory dance which may or may not include spiking your dreidel.

Hey: You get half of what’s in the pot. If there’s an uneven number of items, you need to get a knife.

Shin: You put things back in the pot. No one likes shin, which is why dreidels in Israel have a pei. But it doesn’t help.

The object of the game is to eat all your chocolate coins before you get a shin.

Though you don’t have to play with chocolate coins. You can use anything – pennies, paper money, M and Ms, jelly beans, or even raisins, if you don’t want your kids to care who wins. In my house, we have so many dreidels that we can play dreidel with dreidels. Whoever rolls a gimmel gets to keep all the dreidels.

Dreidel is a classic game that Jews have been using for thousands of years to teach their kids about gambling. And kids like the game, because it’s pure luck and involves absolutely no strategy, and that’s the only way they’re going to beat adults at a game that doesn’t involve memory. The only strategy in the game is that if you go first, you have a better chance of winning, because the only way for the last player to do well on his very first turn is if absolutely no one before him gets a gimmel OR a hey.

Playing dreidel is like the miracle of the oil. You expect a game to take ten minutes and it lasts for eight nights. In fact, that very first game of dreidel is still going on in a cave somewhere. They have no idea the war’s over.

In fact, that was the whole idea: They wanted to convince the Greeks that they were playing a game, but not one that the Greeks would want to join in.

And then they left before they could get a good look at the dreidels’ yellow-on-yellow letters in the dark and start asking what this “neis gadol” was going to be.

Okay, so I kid. No one could play dreidel for that long. Even the Maccabees didn’t play dreidel; they just pretended to play it. No one in history has ever successfully finished a game of dreidel. In fact, it’s entirely possible that the dreidel is not even a toy. It’s a tool they invented to help get the gunk out of your menorah.

But there are variations on dreidel, aside from turning it into a drinking game. (Gimmel is a shot, hey is a half shot, shin is a shot of shemen.). For example, if your big issue is time, you can play it over the course of an actual meal, with people sitting around the table for hours, with the dreidels having to contend with all the plates and cutlery for the dreidel to fall on or smash into, (“ANNOUNCEMENT: The red dreidel is now milchig!”) and based on the results of their spins, people can take food from the middle of the table. (Or put some back.) And the house always wins, because the house doesn’t want leftovers.

Or you can go the other way and play a variation called “Speed dreidel”, which is where everyone spins their dreidels at once, thereby cutting out the fun of sitting around and watching other people’s dreidels spin, one at a time, (“Yeah, do a trick shot. We all have time for that… Just fall already! I don’t care.”) and then everyone looks at their letters at once and divvies up the pot mathematically, which is really what the Jewish fun of a game is all about: prolonged arguments about division.

You could also play “Bobbing for dreidels”, because, as I recently discovered playing some of these variations, dreidels float. Put a bunch of them in a big tub of water and have everyone take them out either their teeth and then try to drop them on a table so that the gimmel is facing up. For extra winter fun, fill the bucket with ice water.

And speaking of winter, my family plays a game that is a variation on the “Pass the Present” game, where we have a huge glob of saran wrap around several layers of prizes, and whoever gets a gimmel gets to put on a thick pair of mittens – the kind with a thumb and a huge “whatever” pocket for all your other fingers – and try ripping layers of saran wrap to get to the prizes before someone else rolls a gimmel and takes over.

The first year we did this, no one was really taking it seriously until the first prize was uncovered and it was a big block of cheddar cheese. I have no idea how my parents fit that entire saran glob into their fridge to keep that one prize cold. But then everyone went crazy, spinning dreidels as fast as they could and pulling mittens and the glob away from each other in a mad rush to unravel all the prizes – none of which were as good as that cheese – until they got to the middle, which was a chocolate dreidel that had been ground to dust over the course of the game.

And that’s how you know the game is over.

But if that’s a little too quick for you, you can suggest that everyone spins the dreidel in mittens.