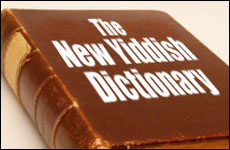 I’ve heard some people say that mama-loshen, or Yiddish is making a small but mighty comeback. Halevai! Is there a language that’s more expressive, passionate, hilarious, and bawdy, with words that are so spot-on, you “feel” both the sting and the love?

I challenge you – find one English substitute for “Chutzpah!”

A test: Find one English substitute for “Chutzpah!” Ok, true, there’s “gall,” “nerve,” “courage,” but none deliver the same punch as our “chutzpah.”

“ Yankel took home the leftover wine?! He has some nerve.”

Are those snoozers or what?

This my friends, is a true character evaluation (or assassination). And more, like many Yiddish words, it’s versatile.

“It turns out Yankel took the wine back to the store to complain of rotten corkage! He not only got the gelt back, but a free bottle of Manischewitz! Now that’s chutzpah! (Good for Yankel!)

Other words, from mensch to yutz also deliver levels of meaning for which there is no direct English translation. A “mensch” isn’t merely a “person,” but a person. He or she is a human with a heart, a soul, a generosity, a righteousness whose empathy will not only get him to heaven, but put him first on the heavenly lox and bagel buffet.

Our language is so rich, many words have become part of our Yinglish lexicon thanks in part to media. Even in Monkey Run, Missouri, a fair number will know “meshugge” means you’re one letter short of an M&M.

Since Boomer days, JYAs (Jewish Young Adults) have “heard” the words, but some are a little farshimmelt about usage. For example, the other day I heard a young Jewish college student say: “Oy, this physics paper has got me so fapitzed!” He dresses up for confusion? A neighbor recently spouted: “I was so verklempt, I finally told my boss to drop dead.” No Mike Myers (Linda Richman on SNL’s “Coffee Tawk”) is farmisht, you are a Shmegegge!

Fortunately, some secular schools are giving courses in Yiddish now, and there is a burst of new Yiddish theatre offerings, all of which does my soul good.

But it’s a new world filled with digital thingamabobs aimed at making sure no GenY-er has to say an entire word, or Oy! a whole phrase. As Judaism has always insured our customs are adaptable, I’ve come up with new Yiddish words that our JYAs can say, text, raspberry quickly – and make their point … or some point.

“Blogshert”: You met him on JewLove.ca, texted, e-mailed, and share a love for lokshen. But, he lives on Prince Edward Island, and you’re from Petawawa. What’s the next step? To discover your true prospect potential, share a personal blog! With daily entries you’ll know the ganza: what he eats, what bus he rides, his pals, and how he argued with the meter maid and bought socks on EBay.

Text: “BShrt.” Usage: “Sorry Ruchel, I can’t go to the movies because I have to share with my blogshert that Kraft polly-o string cheese is now Kosher … and maybe we should finally meet for pizza!

“Challahveid”: You overdid last Shabbos on the so-good challah, then the challah French toast the next morning and the challah bread pudding mit the raisins. Oy the agony, oh, the ecstasy!

Text: “CVed.” Usage: “Darling, I’m so challahveid, I’ll text you … Thursday, before Shabbos. By then the swelling should go down.”

“Chaloshinations”: A combo of the Yiddish “chaloshes” (“disgusting”) and “hallucinations.” Describes people who think their underwear is out to get them.

Text: “Loshing.” Usage: “Marvin, stop with the loshing already. In the monsoon, trust me. No one noticed that zit.”

“Chutzpahooding”: The ability to “hide” chutzpah by saying it comes from love. This is a major league art and should not be practiced by amateurs.

Text: “Z-hood.” Usage: “When I returned to my apartment, my sofa was gone, with a note from my mother, the chutzpahooder: ‘Mamala, I know on your farshtinkener salary all you can afford is vinyl, which you I think is a leading cause of cancer. So, for you daddy and I ordered the best futon from Target – in rainbow. Enjoy, darling.”

“Farpitztanista”: A Jewish trendsetter for who fashion is her life.

Text: “Pitzta.” Usage: “Those farpitztanistas on Princesses: Long Island with their expensive shmattes are so shallow they put lip-gloss on their heads to impress God.”

“Krenkenstein”: You’ve got a headache, they think they’ve got a brain tumor. For the krenkenstein, every pimple, every rash or itch is an early warning sign of a disease only old men in Yekaterinburg get from a constant diet of herring.

Text: “Krenkies.” Usage: “That meshugge krenkie asked if anyone on Facebook died from herring after itching! I texted that my Russian family are in Stage Two – protective gloves.’”

“Kveitchers”: Part “k’vitch,” “part kvetch,” you need these “friends” whose latte is always too cold, too hot, too milky, too coffee, like a loch in kop (hole in the head).

Text: “Veitchers.” Usage: “Don’t do deli with those veitchers! Again they complained the pastrami was too lunghy, and worse, screamed to the owner: “May all your teeth fall out except one to make you suffer!”

“Mieschatanem”: Ok, so the in-laws resemble Brezhnev with the one eyebrow. Do JYAs have the patience to say or text: “Oy, are my mechutenem ugly mieskeits?” That’s six whole words!

Text: “Mieschuts.” Usage: “True they’re my Mieschuts, but I bought a tweezer the size of a hedge clipper, should God forbid it’s hereditary.”

NOTE: the prefix “Mies” may be added freely, for example:

“Mieshugge”: He’s not only nuts, but not too good-looking.

Text: “Meishug.” Usage: “He’s working on an APP for the blob fish because he ‘feels a connection.’”

“Tweetkops”: The creep you never met, don’t want to meet, who hock you with invites on Twitter.

Text: “TKs.” Usage: “Oy, I got tweetkupped from a guy named Ugmat who sent: “My dear friend Moonie. Write from home for 50 cents (U.S.) an article! Knowledge of Tagalog helpful.”

“Yentering”: Originally from the Yiddish word “yenta” which means she’s into her business, your business, her plumber’s business … and spreading the news. This new word makes it a “condition.”

Text: “QY.” Usage: “Do I care if Chava made a dry brisket?! Quit Yentering me already!”

“Yentertaining”: OK, you heard the news that your vilda chaya cousin was Unfriended on FB for “yentering.” Now this is “yentertaining.”

If you, my dear readers, by all means send more and add to this mitvahfying Mitvahfication.

New Jewlarious Blog #2
Can We Still Believe in a Soul?
He Who Must Not Be Named: Responding to Mass Murders
My Visit to Walter Reed Army Medical Center
Comments
MOST POPULAR IN Jewlarious
Our privacy policy

Can We Still Believe in a Soul?
He Who Must Not Be Named: Responding to Mass Murders
My Visit to Walter Reed Army Medical Center
The Nobel Prize-Winning Neuroscientist Mussolini Couldn’t Stop
The Beauty Queen of Jerusalem: 6 Jewish Communities Who’ve Long Called Jerusalem Home
Why We Let Our Kids Draw on the Walls
Listen to the Silence
Ida’s Classic Cheese Blintzes Recipe
Looking In, Not Out
Drop Your Armor: Don't Be Afraid to Be You
1 2 3 … 2,982 Next »