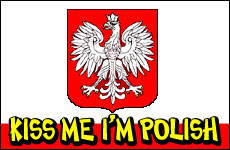 My quest to become a Polish citizen reminded me who I really am.

Watching the news, I heard that savvy Israelis were reclaiming the Polish citizenship that their grandparents had lost just before the war. While I knew that no Jew ever cries out, "If I forget thee, oh Warsaw, may my right hand whither" or sits at his Passover table singing, with deep pangs of longing, "Next year in Krakow," I nonetheless snapped into action and called my brother. We too would become citizens of Poland!

Why Poland? Blatant self-interest. As citizens of Poland, an EU member, we could suddenly work anywhere in Europe. I had visions of moving to London by the end of the month -- soon, my older brother would be in Paris, my sister in Amsterdam, my younger brother in Prague. Yes, we would be Polish nationals, living in the Polish Galut (exile), making our new country proud or, more accurately, just taking advantage of its citizenship laws.

Years ago, after our grandparents escaped Europe, the Poles stripped them of their citizenship. But, later, the Poles -- for whatever reason -- invited many like them back. While our grandparents had no interest at all, deeming Polish Citizenship "useless," we -- at long last -- would frivolously recapture their citizenship and prove its lack of use by never even living in their land.

While no Jew ever cries out, "If I forget thee, oh Warsaw, may my right hand whither," nonetheless, I wanted to become a citizen of Poland.

Our first step in this process was to schedule an appointment with the Polish Consulate in Toronto. Our next step was to email each other repeatedly with the subject heading: "Becoming Polish Next Tuesday." We could hardly stomach the eight days until we would become Polish citizens and we could hardly wait.

As we plotted our strategy, my brother and I began to imagine what it would be like. We would get "Kiss me, I am Polish!" shirts and buttons and proudly wear them to our annual Polish Independence Day bash each November 11th. Instead of burgers and fries, we would cook Kilbasa and Perogies. Posters of Lech Walesa and Copernicus would now adorn our bedrooms. Of course, Polish jokes were now passé and my brother and I would dismiss those who engaged such bigotry. Who were they to insult our people? I was offended already.

When the day came, we drove to the consulate and then waited...and waited...and waited for Irina, a Consular Officer to meet with us. We paced back and forth in the Consular lobby and watched as the women behind the glass booths smoked and filled out visa requests. I could not help but wonder, "Would we be Polish today?"

Slightly more than an hour after our scheduled appointment, Irina walked in, the smell of fresh cigarettes on her breath. She started speaking to us in Polish. We must have looked at her with stunned surprise because she politely transitioned to English. She asked us for our documents and we gave her our birth certificates and passports and also gave her records of our respective grandparents' immigration papers from 1937 in Nova Scotia and 1938 in Newfoundland. I opened my Zaida's passport, saw his smiling face and thought: "If only he could see me now. He would either be enormously proud or profoundly disappointed.

As Irina leafed through the documents, she informed us that very few people are in fact eligible to reclaim their grandparent's Polish citizenship. She explained that our grandparents had to have left after 1954, but ours had left well before. They needed to have never renounced their Polish citizenship, but ours had done so to become Canadian citizens. In an instant, my new homeland had been torn away from me.

Back in our car, heading home, entirely demoralized, my brother tried to lift my spirits. "Maybe there is another way for us to work in Europe?" Our paternal grandfather was from Latvia. Maybe we were Latvian at heart? We had family in England too. Maybe be could try out cockney accents for a few days and see what happens? Our great grandmother was Austrian perhaps I could strap on a pair of lederhosen?

As a sense of failure set in, we pulled up to my apartment. Before saying goodbye, I looked at my brother and said, "It's a real shame. I would have made a great Pole."

"You can still live the dream," he consoled. "I need to get rid of a cupboard full of Kilbasa."

Weighing my brother's offer, I concluded that with so little to gain from Kilbasa personally, I should just stick to the comfort of brisket and tsimmis.