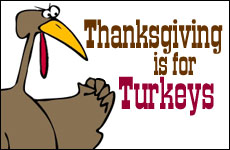 I’m sitting out Thanksgiving this year. Not because I am un-American, but because I’m full.

Listen . . . do you hear that? Those annoying squawking sounds are the desperate cries of the nation’s turkeys, sensing doom. Inside their tiny brains, they know that they about to peck their last bits of fallen corn before they are sent cruising at an altitude of 350 degrees for four hours before landing on oversized platters as the starring feature of Thanksgiving dinner.

As a Shabbat hostess, I make Thanksgiving every single week.

I mean no disrespect to this great American tradition. Few other advanced civilizations have the audacity to give thanks for the Lord’s bounty while simultaneously consuming more calories in one sitting than the average Gambian will consume in an entire lifetime. But as far as I’m concerned, you can take this turkey-crazed holiday and stuff it. The reason is simple. As an inveterate Shabbat hostess, I make something akin to Thanksgiving every single week. Wine, freshly baked challah, a soup or salad appetizer, a main course with three or four side dishes, and delectable desserts. Shabbat is our sanctuary in time from the demands of work, the lure of online shopping, and the challenge of finding parking in a crowded metropolis. It is, if I may be so bold, even more extraordinary than Thanksgiving, so I happily roll up my sleeves and log many hours in the kitchen each Friday to prepare for it. This is why I need another holiday that requires cooking like I need my kid to lose her $425.00 orthodontic retainer. Again.

I understand and sympathize with average Americans who get all worked up and a little neurotic about Thanksgiving. After all, for them, preparing special meals for a crowd is a novelty. Faced with the prospect of cooking a formal dinner for a dozen or more people, they tune into The Food Network as if awaiting the ultimate revelation, download recipes that promise their big birds won’t emerge from the oven drier than the Negev in August, and call radio psychologists for advice on surviving a three-hour meal with relatives whose personality quirks and passive-aggressive natures make them break out in hives. They also have to put in a good word for the Pilgrims at the table, no small feat these days because the children have been taught at school that the Pilgrims were evil imperialists who came over on the Mayflower specifically for the purpose of committing genocide on Native Americans. Oh yeah, and Cousin Randy is bringing his new girlfriend, who is gluten-intolerant. You call this a holiday?

We Jews are used to all these challenges and then some. Long ago I learned the secret of cooking a turkey that earns rave reviews (“So moist I bet you ordered it from a restaurant!”) Don’t ask me how I do it. I said it was a secret. I’ll just say this: A turkey is really just an overgrown chicken, so don’t be intimidated. If you still insist on being intimidated, just buy the turkey breast. Now stop pressing me for more details. When I said it was a secret I meant it! As for dealing with difficult relatives, that’s too long a megilla for now. One day I may screw up the courage to write about this – under a pseudonym.

For the sake of our non-Shabbat observant relatives, I used to make Thanksgiving dinners with all the trimmings, except for candied yams, something whose very name makes me just feel borderline diabetic. I tell you, I knocked myself out for those spreads. I was determined to show our extended family that while I may have become kosher and Shabbat-observant, I still had that rah-rah American spirit and could cater a 3,500 calorie feast just like anybody else. I decorated the table with cute little paper cut-out Pilgrim caps and carved acorn squash and yellow crookneck squash into the shape of a turkey. At least, it was supposed to have been a turkey. Mine actually looked like a gerbil, but that was entirely unintentional.

Sure, I had plenty of leftovers to serve for Shabbat the next night, but I couldn’t shake the feeling that Thanksgiving was, well, redundant. This is what happens when you are Jewish and already give thanks dozens of times each day, for everything from the rhapsodic experience of seeing a rainbow to the blessing of having a bottle of overpriced, ph-balanced water to drink.

I think it’s great that Americans still celebrate Thanksgiving. I say, the more thankful we are as a nation, the better, even if it is accompanied by a nearly comatose collapse on the couch to watch football and a walkathon the next morning at the mall for the blow-out pre-holiday sales. But I’m sticking with my weekly Shabbat meals. They are easier on the waistline, though I do sometimes sneak in a little prayer that the calories in dessert won’t count as much because I’m only eating it for the mitzvah. (Well, a woman can dream, can’t she?) I serve these meals on my best dishes, and if you bring a gluten-free, or vegan, or cayenne pepper-intolerant guest to my table, I’m ready with forty-eight hours notice.

Once I gave up trying to stuff in one more holiday into my already busy holiday entertaining schedule, I had even more reason to give thanks. And I’m not alone: those other squawking sounds you hear are those of at least one of the nation’s turkeys, thankful that I am not after him this November.

Shakespearowitz?
The Blue Beyond
Great Place to Live
Is Eating Supposed To Be Spiritual?
Comments
MOST POPULAR IN Jewlarious
Our privacy policy