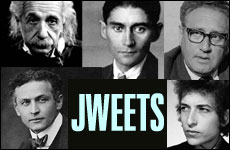 For those of you who’ve been living in a cave for the past four years, you’ve got a lot of catching up to do – mainly episodes of “Lost” and “Dancing With the Stars.” Otherwise, things are pretty much as you remember them. Except for this new (to you) thing called Twitter. Twitter is a social networking and micro-blogging (Just Google any words you don’t understand. Oh, but first have someone explain Google to you.) service that enables its users to send and read messages known as tweets. Tweets are text-based posts of up to 140 characters displayed on the author's profile page and delivered to the author's subscribers who are known as followers. No, I’m not making this up. Hey, well it’s partially your own fault for choosing cave dwelling for the past few years, now, isn’t it? I was upset about the Enron disaster, too, but I didn’t go all prehistoric about it.

Anyway, since its creation in 2006, Twitter has gained notability and popularity worldwide. It is ranked as one of the 50 most popular websites worldwide with 55 million monthly visits and a monthly growth of 1,382 percent. Is it any wonder that Jews, being the great communicators we are, have taken to it like lox to eggs?

Imagine, though, if Twitter had always been around. How might that have changed the lives of notable Jews through history? What might their tweets have said? What kinds of insights might we derive from studying them? These are the kinds of thoughts that fill my mind on a daily basis. Which means that either I’m an extremely thoughtful, imaginative person – or that I’ll have to be in regular, frequent, psychological therapy for years and years before any progress is notable. But that’s not your problem. All you need to do is enjoy the following Jewish Tweets Through History.

What good is escaping from a locked, underwater crate if your mother-in-law is waiting to nag you as soon as you get out?

Let my people go – and then check out our cool nomadic community at groovychosenpeople.com. Free unleavened bread the first 100 to logon.

“E=MC². I know that may seem confusing now, but one day you’ll recognize it as the work of a genius. I know; I’m working on my humility.”

Twitter’s great for people like me, whose voices can put anyone within a three mile radius to sleep.

“The human psyche can be divided into three parts: ego, super-ego, and id. I’d say more, but our time is up. How does that make you feel?”

Gambling, bootlegging, murder – does life get any more satisfying than this? Hey, pass the whitefish.

“I can’t understand why they won’t let me star in ‘Hamlet.’ My only requirement is keeping the moustache, glasses and cigar.”

A first sign of the beginning of understanding is the wish to die. How come I’m not invited to more parties?

How is it that a man can found the American Federation of Labor and still not be able to get a date? Life’s just not fair.

How many characters must a man write down before they call it a tweet? The answer my friend is found on Twitter’s FAQ page.

Hey, if you ate as much cholent as I did, you’d paint men and goats flying over houses, too!

Marilyn, you don’t know me, but I’m a fairly well known author and I just get the feeling that we might hit it off.

I just want to meet a woman who’ll let me stick needles in her arm. Is that too much to ask? But, no, they all have to call me a weirdo.

For our first date, Siggy had me rest on the couch and discuss my unresolved feelings about my father. I would have preferred a picnic.

Mark my words – some day my name will be on your rear end.

If only I could meet two other people named Metro and Goldwyn – then my career would really take off!

One day I’ll be known as the most famous feminist and founder of the National Organization for Women. Then I’ll be able to get a date.

I’m working on a top-secret project in Los Alamos for the U.S. government. It’s the bomb!

If you have any neighbors with a German accent who seem kind of nervous and stand-offish, please let me know.

Step Bubbiehood
Don’t Believe in Other Gods Versus God is One
Seeing Without Eyes
Why Shouldn’t We Eat Whatever We Want?
Comments
MOST POPULAR IN Jewlarious
Our privacy policy
Aish.com Is Looking for Great Writers