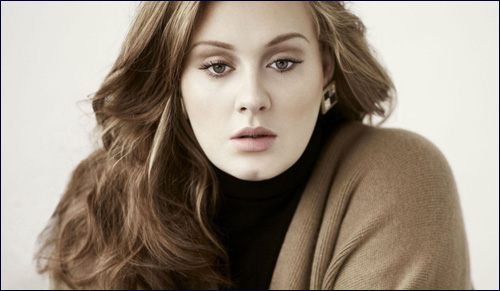 Does the superstar’s old-style elegance add to her allure?

In its first week, her third album, 25, has sold over three million copies, breaking *NSYNC’s record in the 2000 release of No Strings Attached. This is a huge feat in an industry that has seen album sales fall more than 60 percent since 2000. Along with the release of 25 came the stunning music video of the single “Hello,” which was downloaded 1 million times an hour.

Social scientists have tried to study what it is about the 27-year-old’s songs that make people cry. Music industry analysts are trying to figure out how to replicate her success. Fashion designers hope that her vintage-inspired, more modest dresses might spark a new sartorial trend. Two weeks ago, Saturday Night Live parodied her monumental stardom in a hilarious skit, where family members sitting around the Thanksgiving table are arguing heatedly about political and social issues. Tired of their endless sparring, a child at the table gets up and turns on Adele’s song “Hello.” The tension melts instantly as family members of all ages and political stripes begin singing along rapturously, even morphing into Adele lookalikes.

Adele (Adkins) was born in north London to working-class parents. Her father left when she was just two years old. Growing up, she was obsessed with the voices of emotive singers, especially Etta James and Ella Fitzgerald, huge stars in the 1940’s and ‘50s. At 14, she attended the BRIT performing arts school, uploading demos to her MySpace page. By 18 years old, she had a contract with a recording company and her career was launched.

“I'm not perfect, and I think a lot of people are portrayed as perfect, unreachable and untouchable.”

Equally at home with ballads, blues, pop, even gospel and jazz, Adele sings with poignancy and sometimes melodrama about eternal themes of relationships, nostalgia, longing, and hopes and dreams. These are evergreen topics, so what makes Adele so adored?

Part of it, at least, is due to the fact that she is unapologetically a plus-sized woman. While her size shouldn’t be an issue at all, because of the novelty of her talent and success, it is. In an interview with Rolling Stone, she said, “Sometimes I'm curious to know if I would have been as successful if I wasn't plus-size. I think I remind everyone of themselves. Not saying everyone is my size, but it's relatable because I'm not perfect, and I think a lot of people are portrayed as perfect, unreachable and untouchable.”

Adele has consciously channeled the glamorous elegance of the 1940’s and 50’s in her carefully crafted wardrobe. Her trademark dress of a long-sleeved black dress with a lacey overlay is almost startling in this era where most female singers strut onstage in tight and degradingly revealing outfits. Nor does she prance or dance when she sings. “I don't make music for eyes, I make music for ears,” she has said.

Watching her perform, she seems intensely focused on the music, sometimes turning the mic toward her audience and inviting them to continue singing a song, a sudden chorus of thousands. She appears to be visibly moved that her audience is visibly moved. She seems real, and her refusal to conform to the fashionably thin “model” makes her seem even more real. Her combination of vulnerability and confidence, expressed through her songs, is a winning combination to her millions of fans.

Adele’s unusually discreet performance wardrobe has struck a chord with millions of women who are offended by the starkly provocative, barely-there outfits favored by so many other female entertainers. Working in an industry with unforgiving standards for physical beauty and insane and degrading competition for who is the sexiest performer today, perhaps those performers feel they have no choice. But how ironic is it that these women, nearly all of whom would probably call themselves feminists, allow themselves to be objectified by their clothing? In revealing so much skin, they hide their true inner essence.

The public image that Adele has developed is in some ways quintessentially Jewish. She’s there to share what’s in her heart and in her soul, which she does masterfully by keeping her wardrobe a simple and dignified canvas as a backdrop to the music. This reflects the concept of tzniut, modesty or discretion, which puts the emphasis on the soul over that of the body. Tzniut is the concept that drives us to dress, speak and live with the notion that we are souls more than we are bodies, with an aim toward dignity and discretion in clothing, word and deed.

Adele is refreshing not only for the wonder of her voice, but because she dresses with a dignity, all too rare these days.

Naturally, as a star Adele cannot ignore her looks. She has a retinue of staff to ensure her make-up, hair and gowns are perfect before she goes onstage. I believe that her mega-stardom is related at least in part to her choice to emphasize her inner beauty over that of her body, and to flout the conventional wisdom about how a woman “should” look. Whether she would have made the same choice if she were a size 4 or 6 doesn’t really matter. For now, her own form of tzniut – at least in clothing if not in other areas of life – has been a gift she has given to herself and to a public that is desensitized from the incessant focus on the physical over the spiritual. Adele is refreshing not only for the wonder of her mellifluous and emotional voice, but because she dresses with a dignity, all too rare these days.

In an industry where women are almost always judged by their figures, her outsized success gives people another reason to cheer.

Star Trek and God
Why the Mezuzah is Placed on a Slant
Faith: the Axis Upon Which the Wheel of Science Turns
Love - Not Just About Chemicals Anymore!
Comments
MOST POPULAR IN Jewlarious
Our privacy policy