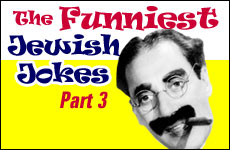 My favorite jokes including one that explains the secret to Jewish survival.

Jewish humor is distinctive because it comes from a culture that has, for thousands of years, felt special but has been forced to suffer. From suffering comes our joys as well as our oys. The true Jewish joke reflects a unique mindset; our witty, hysterical, often irreverent view of the world and the people in it – and us. If you think you can stick in another culture and get a laugh … mamalas, don’t try it!

The Jew says, I'm tired and thirsty. I must have diabetes.

A perfect example is one comedian Marty Allen asked to use in his act:

The Italian says, I'm tired and thirsty. I must have wine.

The Scotsman says, I'm tired and thirsty. I must have Scotch.

The Russian says, I'm tired and thirsty. I must have vodka.

The Jew says, I'm tired and thirsty. I must have diabetes.

Mix it up. A thirsty Scotsman worries about diabetes? Funny? Feh!

In this part, I’ve chosen a sampling of my favorite jokes that reflect our Yiddish kops and offer a brief opinion about why these are special and “Jewish.” Enjoy! And by all means, challenge me with your favorites!

Jennifer Finkel, a gansa “Ivy” freshman, brought home equally pompous pals. She couldn’t wait to show off her new knowledge with her bubbe. Arguing with great intensity, the co-eds discussed Darwin and the revisionists’ attack on the theory of evolution.

“No, gram,” protested Jen and her pals. “It’s very complicated!”

“Complicated-shmomplicated! Please. Even 60 years ago in Russia, we knew the answer, 1-2-3. If the baby looks like his father, that’s heredity. If he looks like the milkman, now that’s environment!”

We Jews discuss, debate, argue the most complex matters of religion, tradition, politics. Yet, we also have an uncanny gift for knowing when to simplify (and give our hoo-ha kinder a bissel k-nock).

Solly and Max were describing their fishing expeditions with great relish.

"Once in Florida," said Solly, "I caught a fish so huge, it took three men to shlep it in!”

"That's nothing," scoffed Max. "I once caught a lamp, with a date engraved on it -- 1492, when Columbus discovered America!”

“Yeah? Well, the lamp I caught was still lit!”

Nose to nose, they stared each other down ... until finally ...

“Listen Max,” said Solly. “How about ... we make my fish five pounds and you put your light out!”

The IDF aside, most Jews believe in negotiation and compromise. Who has the energy to pick up a rifle after so much brisket? The next line is probably, “Now, let’s eat!”

An Orthodox man was traveling on El Al, when his seat mate asked what he did for a living.

“Well,” said the man condescendingly, “I was born Jewish. I don't know much about it, but I presume you could sum it up in one sentence: ‘Do unto others as you would have others do unto you.’"

The rabbi smiled, then said, "And what do you do for a living?"

"I’m an astrophysicist,” he replied smugly.

Well," said the rabbi, "I don't know much about it, but I presume I too, could sum it up in one sentence: ‘Twinkle, twinkle, little star -- how I wonder what you are.’”

Brilliant, wise, witty … We Jews can dish it as well as take it. And we do so beautifully with a well-timed, clever and if required – sarcastic remark.

SO IF NOT NOW, WHEN?

“A divorce?” asked the shocked lawyer.

“Well ... how long have you been married?” he asked in disbelief.

“Seventy years?! Why a divorce now?”

Who but a Jew would understand this phrase and its full meaning. Much like “a mensch,” “enough is enough!” are potent words to us: “We’ve got the patience of Job. We’ve waited, and waited … country to country … we’ve given our all to our hope and belief. But there comes a time when “enough is enough!”

SO, A LITTLE MORE TSOURIS

A new flood was predicted and nothing could prevent it. In three days, the waters would wipe out the world.

The Dalai Lama appeared on worldwide media and pleads with humanity to follow Buddhist teachings to find nirvana in the wake of the disaster.

The pope issued a similar message, saying, “It is still not too late to accept Jesus.”

The chief rabbi of Jerusalem took a slightly different approach. “My people,” he said, we have three days to learn how to live under water.”

I always ended my Joy/Oy calendars with this joke. While not a knee-slapper, in one joke, we’ve summed up our persistence, determination, and uncommon flexibility! To me, even more than “Don’t do unto others” this joke … is at the core of our Jewish identity. Survival! 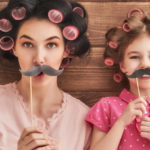 Jokes about Jewish Daughters and Their Parents6 min read