I Fell in Love with Old Jews Telling Jokes 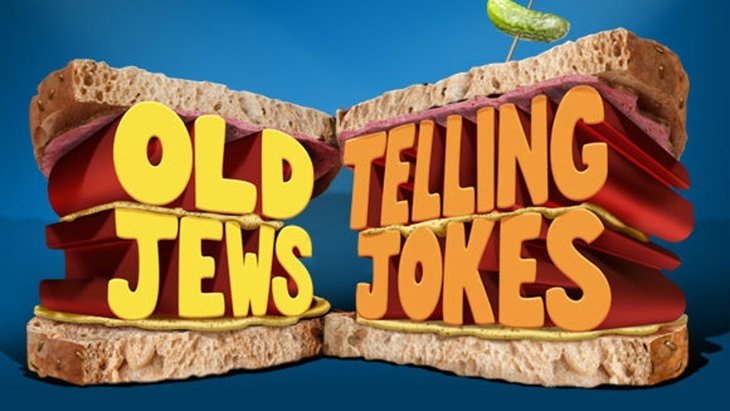 Old Jews Telling Jokes is now an off Broadway production.

Created by Peter Gethers and Daniel Okrent, the show features five local actors, (Art Brown, Jeff Lesser, Julien Ari, Danielle Kay, and Wendy Hammers) three of whom are “old” Jews and two a young couple, performing a mix of monologues, skits, sketches, stories, routines and songs that pay loving tribute to and have enormous fun with the rich tradition of classic Jewish humor.

The humor is hilarious, but can occasionally get suggestive so don’t say I didn’t warn you. But what becomes abundantly clear is that even though these are Jews telling Jewish jokes, you don’t really have to be Jewish to get and enjoy them. The humor could be from Italians, Chinese, Hispanics, blacks, or any oppressed ethnic or religious group that has used and continues to use humor to cope.

Here is an inside look at the show, courtesy of an exclusive interview with one of its performers, Wendy Hammers, one of the actual Old Jews.

How did you happen to get involved with the project?

I did it the old fashioned way. I auditioned. They didn’t know me from a hole in the wall. The project just sounded like a lot of fun and a happy marriage between two of my greatest loves - live theatre and making people laugh. I was delighted when they offered me the role of Bunny.

Which of the jokes is your favorite?

I’d say that the most rewarding joke for me to deliver is one that I consider to be a particularly smart joke, and one insightful regarding the Jewish experience. It plays with the cultural stereotype of Jewish people being greedy or money hungry (which, by the way, seems completely ridiculous to me and far from the truth)... anyhoo, here’s the joke...

Zipkin and Weinstein are walking past a Catholic Church when they see a huge sign...

Weinstein says, “I’m gonna do it”, and he strides into the church. Twenty minutes later, he comes back, with his head bowed, and Zipkin asks, “So, did you get your fifty bucks?” And Weinstein says, (and I shake my head with disdain when delivering the punchline)...is that all YOU people ever think about?”

This always provokes such a long, rolling laugh, which is very rewarding as a performer. You can feel people processing it, and really getting an understanding on such a deep level. We get to laugh at ourselves and the absurdity of it all.

Were the jokes already selected for the cast, or did you get to choose the ones you presented?

Already selected. The writers felt there was a play in the Old Jews Telling Jokes website material and set out to create one. I guess a review is a good word to describe it, but I personally think of it more as a play.

Have any audience members been offended by some of the jokes?

Maybe. Mostly people come to laugh. Our show suggests that you be 21 and over, much like a comedy club does. Honestly, people seem grateful to have an excuse to laugh and to not take life so seriously, at least for ninety minutes. I’ve noticed some of the older Jews at the matinees shake their heads a little bit like they’re embarrassed and then they burst into laughs. I find this duality fascinating.

Has doing this show made you feel closer to your Jewish heritage?

I already feel a strong connection with my Jewish heritage and identity. But for sure I would say that many of the characters I play in the show are directly inspired by my mother and my grandmother. It’s been lovely to have them bounce about the stage with me, serving as muses. I am very proud to be a Jewish person. I wasn’t raised very religiously, but I know who I am and a big part of that is being a Jewish woman.

Does Jewish humor differ from any other ethnic/religious group’s humor?

This question is begging for a punchline - you mean there’s other kinds of humor besides Jewish? I had no idea. 🙂 I think it’s safe to say any people who have been marginalized or persecuted have had to use humor as a coping mechanism. So, whether it’s Jews or Irish or Italians or African Americans or Hispanic or Armenians or any fish out of water people whose ancestors came to this country trying to find a way to fit in - they all used humor as the glue to connect them with others and feel a part of. No doubt there is some sort of Venn diagram that could be drawn that involves minorities, pain, and punchlines.

Do you have favorite old-time Jewish comedians?

Joan Rivers for sure. Also loved Rickles. We named our cat after Shecky Green. Saw them all live in Atlantic City back in the day. Met Buddy Hackett years ago at a golf tournament and he said the shortest distance possible between two points is a straight line and that’s what you wanted to do with jokes as well - draw a straight line from the set up to the punch. Make it a straight line so the audience doesn’t have to work so hard and they get to laugh sooner. Our family went to the Catskills as a child. Remember loving Mal Z Lawrence. Totie Fields.

Have to mention my top influence. You wouldn’t really consider her a stand-up comic, although she’s damn funny - Bette Miller. Many of the jokes in her club act - bawdy and hilarious - were Sophie Tucker jokes. Young Jews reading this – if you don’t know who Sophie Tucker was, ask an Old Jew.

Did the various casts of this show always feature two young Jews as this one does?

Did the cast or director reject any of the jokes?

We did. If a joke seemed outdated or might be offensive to people with disabilities, we altered it to make it more politically correct. There were a few other jokes that we omitted for similar reasons. And we replaced them with jokes that we liked better.

At what age does one officially become an "old Jew"?

That’s such a good question. I’ll be 59 this year but I mostly act 14. I don’t really think I qualify as an old Jew because I have a young heart and spirit. At the same time, I am starting to embrace my older Jewishness and whatever that might entail. It’s all relative.

Has this show given you a greater appreciation for the classic Jewish jokes?

Most definitely. I appreciate the short form straight to the punch classic jokes, as well as the long form narrative storytelling. I understand it is all part of a culture that I come from and that makes me laugh and smile.

Mission: Impossible: Rogue Nation
The Promise Of The Land
Which Chat Are You On?: Parshas Behar/Lag Ba’Omer
Do You Like Slow-Cooked Food? Thank the Jews
Comments
MOST POPULAR IN Art Smarts
Our privacy policy