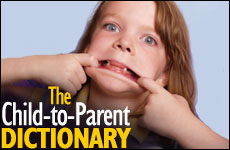 Find out what your kids really mean when they say "I love you."

Among the languages considered most difficult for speakers of English to learn are: Chinese, Hindi, Arabic, Bengali, and, of course Yiddish. Yet these are a breeze compared with attempting to decipher the meanings behind the things that children say to their parents.

This is so because children have over centuries developed their own language. And why not? They can't drive. They can't vote. They can't sequester juries. Language is one of the few things, aside from the cat, over which they can exercise a certain degree of power and control.

Feeling that a children-to-parent dictionary might be useful, I enlisted the aid of my two children, Charley, 10, and Amy, 5, as researchers. I hadn't planned on naming them here, but that was one of the perks they demanded. They also insisted on pizza every night for the next two years, and final approval of my will.

I was going to say no to them, but was afraid they'd grow up and write a Daddy Dearest book --which would not only be harmful to my reputation, but I'll be damned if my kids are going to have a book published before I do.

What's that? Oh, excuse me; my kids just corrected me. It's the "Charley And Amy's Children-To-Parent Dictionary."

* I didn't ask to be born. Because you and mom didn't consult me before breeding, I now have license to get away with everything I've ever done, am doing, or plan to do.

* My stomach hurts. It suddenly occurs to me that sitting on the couch all day while eating Cocoa Puffs and watching cartoons would be far more enjoyable than serving another day's sentence in that horrifying hell-hole you refer to as "school."

* Billy's mom lets him. Your decision to forbid me from having my own pocket knife, however well-intended, seems rather unfair, in view of the fact that one of my friend's parents doesn't seem to mind her son traipsing around with a lethal weapon. (See: I didn't ask to be born, above)

* I'm full. After eating a Hostess Ding-Dong, some potato chips, a fudgesicle, five Oreos, and three licorice sticks at 4:30, strangely enough I don't seem to have much of an appetite for my supper. But, darn the luck, that broccoli looks awfully tasty. So, anyway, what's for dessert?

* I'm bored. My bedroom contains 50 books I haven't read yet, at least that many games, a fully-loaded computer, my violin I'm supposed to be practicing, my homework I'm supposed to be doing, various science experiments, and three friends who have come over to play with me -- but I haven't rented a video game in at least four days, so can I?

* I did brush my teeth already. Now that I'm aware of your technique for checking, I've wet my toothbrush and placed a dab of dried toothpaste by the corner of my mouth, thereby completing my third week in a row of making you think I give a rat's whisker about dental hygiene.

* I love you. I broke your favorite lamp, my teacher's about to call you in for the fourth conference in two weeks, I want to sleep over at my hyperactive friend Petey's house tonight, and can we get another dog?

* Barney's stupid. Despite the fact that that purple dinosaur's show was my favorite for two years in a row, I now have the wisdom, maturity, and good sense to realize what a nauseatingly syrupy dork he is, and so am determined to ruin one of my little sister's few pleasures by singing anti-Barney songs at the top of my lungs while she's trying to enjoy the show.

* Nothing. A superb, all-purpose answer to any one of thousands of parent questions, including: What did you do in school today? What would you like to do during your three week winter break from school? What would you like for dinner tonight? What do you have to say to your sister after drawing moustaches on her Dora the Explorer posters?

* I don't want any chocolate ice cream. I have a physical ailment that is so serious that I can't even think straight. Please get me to the doctor immediately so he can correct it and I can be back in Chocolate Land as soon as possible.

* Hold me. Thereby neutralizing the use of your arms, so you can do precious little else but focus on me, which, after all, is what you should be doing 24 hours a day anyway. (See: I didn't ask to be born, above).

* I want to take karate lessons. Despite the fact that I have shown less than zero interest thus far in any activity more strenuous than changing the TV channel, I just saw some TV super-heroes kick the stuffing out of these bad guys, and thought, heck, if I could learn to inflict pain and human suffering like that, it would be really cool, especially if there was blood involved.

* I want that. The phrase to be uttered whenever any commercial starts.

* Can you help me with my homework? Could you do my homework for me while I watch The Simpsons?

* Can I sleep in your bed? Can I do everything in my power to insure that you get no sleep?

* Yucky. The all-purpose description for any food item that does not fall into the starch category, such as fruits and vegetables, or, for that matter, any food whatsoever that does not come in a Day-Glo colored box with free easily-breakable toys inside and a coupon to send for something that mom and dad are bound to say is disgusting, over-priced and unnecessary.

* The DVD player doesn't work anymore. I didn't see any manufacturer's notice on it saying not to shove peanut butter sandwiches into its disc drive, did you?

* Where are you going? If it's within 250 miles of a Blockbuster Video store, could I come with you? I heard they just got in Super Nintendo's new Hell's Fatal Rotten Bloody Carnage, Part Two--Championship Edition, and you promised I could rent a game if I finished my book report on Gandhi.

* We never get to have any fun! Today's eighth TV commercial for Disneyland has just aired, and you said we don't have $150 to toss at the Magic Kingdom every time Goofy appears asking us to bring mom and dad for a swell time. I'll tell you one thing -- when I'm a grownup, I'm going to get a job at Disneyland so I'll be able to be there all the time. I may even live there. Then I'll have fun for the rest of my life.

Yes, I Wrote for Seinfeld
Extras In Our Own Epic
Evolution 2.0: The Coming Darwinian Revolution
Chukat 5782: Let’s Play the Blame Game!
Comments
MOST POPULAR IN Jewlarious
Our privacy policy