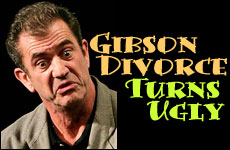 Jewlarious Satire -- Celebrity divorce watchers are salivating as divorce proceedings between Mel Gibson and Robyn Moore, his wife of 28 years, are heating up. A Gibson insider source, Gibson himself, told Jewlarious, "She is so petty. I have one billion dollars and she is wrangling over my miniature statuettes of Himler and Goebbels? She won't let me keep my ‘tickle me Adolf' doll? Those were gifts from my father, legendary anti-Semite Hutton Gibson, and I want to give them to Elias Koteas when I pass on or when the cabal of Jewish bankers finally pays to have me lynched. Why does she need them?"

Moore's camp meanwhile derided these claims as "childish." A Moore inside source, Robyn Moore, told Jewlarious, "Every time Mel is in the bath and I sink his U-Boats, he cries. The man was in Mad Max and Lethal Weapon. Everyone thinks he is so tough, but he's not. The guy is such a baby -- intolerable!"

She's so petty! She won't let me keep my ‘tickle me Adolf' doll?

According to gossip websites, Gibson and Moore had a happy marriage but split when Gibson demanded that he star in a sequel to his now legendary drunken tirade, wherein he drove his Lexus 87 miles per hour (50% over the speed limit) with a .12% blood alcohol level, .04% above the legal limit. Gibson felt that his first performance was "too improvisational" and that a sequel would give him the flexibility to plan a proper anti-Semitic tirade. Gibson's production company had begun work in earnest and had already cast Gibson in the role of "Mel Gibson – Notorious Bigot" and was hoping to give it a "Rush Hour feel" by adding Michael Richards as his fast talking, adorably racist, side-kick.

Now, the project is in peril with Moore potentially wanting half of Gibson's funds and Gibson being unable to finance the project on his own. Gibson complained to Jewlarious, "How am I ever going to get the money for this picture? Can you put in a good word for me with Lloyd Blankfein at Goldman Sachs?"

All Bar and No Mitzvah
It Takes A Lot Of Faith To Be An Atheist
How Instagram Brought Back This Nostalgic Soup
What Makes Eli Run?
Comments
MOST POPULAR IN Jewlarious
Our privacy policy