Thanksgiving Exclusive: A Jewish Turkey Pleads for Its Life 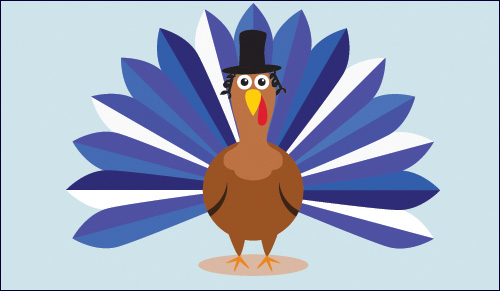 “What, you think there can only be Jewish humans?”

My name is Shlomo Adelstein, son of Mendel and Rivka Adelstein, and I am a Jewish turkey. Yes, there are Jewish turkeys. What, you think there can only be Jewish humans? How egocentric! Why, I’ll have you know that among my friends there are Jewish cows, sheep, chickens, dogs, cats, birds—not to mention my best friend, a hamster named Shoshana Mandelbaum. And yes we’ve had bar and bat mitzvahs, and yes we can speak some Hebrew. I even starred as Tevye in the world’s first all-poultry version of Fiddler on the Roof.

I even starred as Tevye in the world’s first all-poultry version of Fiddler on the Roof.

But I get it. Because when I first found out there were Jewish humans, I was stunned, too. Up ‘til then, I thought all Jews were of the poultry persuasion. But I’ve now come to accept Jewish humans as members of the tribe, too. And hope you’ll do the same for my poultry brethren and sistern. Which brings me to my point.

This is the first thing I’ve written. And it wasn’t easy. After all, I’ve had no schooling. Never learned to read or write. While you were in school, I was spending my time primarily eating, sleeping, and occasionally, davening. So, first, I had to learn English, which is not nearly as user-friendly as Gobblish (our language), then learn to type on a computer keyboard, which was a nightmare. Finally, a friend turned me on to some voice-recognition software, so that’s how I’m doing this. And what is “this,” actually? Okay, I’ll just spit it out.

This is a plea for my life. There, I said it. And how traumatic it was! The very first thing I’m writing and it consists of trying to convince someone not to kill me. Now that’s a motivated writer. Still, I’ve got a good feeling about you.

Anyway, as you know, Thanksgiving is almost here. Or, as we turkeys refer to it, Black Thursday. Oh, sure, Thanksgiving is all fun and games and family and good eats for you humans. But the good eats you’re eating is us—or, as my chicken friends refer to it, Henocide! Haven’t we Jews had enough problems with non-Jews thinking their race is superior so they must wipe us out?

Did you know that every year between 250 and 300 million turkeys are bred for slaughter in the United States, more than 46 million for Thanksgiving alone? Do you care? Hey, look, I know it’s traditional and we taste great and you’ve been eating us forever, but please, just consider this. We turkeys are interesting and intelligent and have complex emotional lives like dogs, cats, and other animals. If things were reversed, would you like us to slaughter you just because you taste good, offered protein, and we were raised eating you?

But the meat industry treats us like animals with no feelings or personalities, not unlike how my ex-wife treated me. But I digress. And don’t think that because they prepare us as kosher it’s any less dangerous to us. What if we told you that you were going to be slaughtered, but don’t worry, you’ll be kosher? Would that make you feel any better? In fact, imagine if this situation were reversed and you had to beg for your lives to turkeys six times your size who had the power to kill you instantly and just assumed you were dumb because you didn’t speak their language and were never seen reading books.

What we should do is fight back. With a class-action lawsuit. Hey, do you know any attorneys who’d be willing to represent 300 million turkeys pro-bono? Perhaps a hungry young Jewish attorney ready to take on a groundbreaking case to make his or her reputation?

But even if you can’t recommend an attorney, there are a few things you can do to help, and thank you for asking. One is to consider becoming a vegetarian. Now I know that according to the Torah there’s nothing wrong with eating animals killed in a kosher way. But at the same time, not eating animal products is better for your health, better for the environment, and, of course, better for us animals. And I assume you’re an animal lover, no? Though, frankly, it doesn’t make sense to have a dog as a pet and still eat other animals, does it? I mean, when you really think about it. But you can think about that later, after you finish reading this.

There are so many nutritional benefits alone to becoming a vegetarian. You reduce your saturated fats, which promotes your cardiovascular health. You up your carbs, which provides energy for your body. You also up your fiber, which guards against colon cancer. You’ll greatly lower or eliminate cholesterol and your heart will thank you for that. Having more whole grains will lower your blood pressure. This list goes on.

How do I know all this? I have a Master’s Degree in Nutrition from Turkey U.

And, hey, potential vegetarians, might I interest you in one or more of the following: weight loss, healthy skin, increased energy, longer life, elimination of body odor and bad breath, healthier hair, healthy nails, relief from migraines, reduction of allergy symptoms, and PMS symptoms that either greatly lessen or disappear.

OK, that’s basically the end of my schpiel. I hope that this Thanksgiving you’ll have given some of this some thought. Because life is a precious gift and we turkeys enjoy it as much as you do. Well, I’m late for my Torah study class. See you around. I hope.

The 25 Weirdest Menorahs You’ve Ever Seen
The Blue Beyond
Great Place to Live
Is Eating Supposed To Be Spiritual?
Comments
MOST POPULAR IN Jewlarious
Our privacy policy