Carter: "I married the political wing of the movement, not the terrorist wing."

JEWLARIOUS SATIRE -- In a celebrity wedding to end all celebrity weddings, former US President, Jimmy Carter, and current leader of the terrorist movement Hamas, Khaled Meshal , "tied the knot" in a star-studded, secret ceremony in Damascus's historic Our Mosque of the Holy Dictator. Guests tell Jewlarious (which paid $1M for exclusive rights to the story and accompanying photos) that Carter was "beaming," as he walked down the aisle in his black Giorgio Armani tuxedo and that Meshal looked slightly nervous as he wore a white Vera Wang gown, strapped with explosives. Janine Garafola, a guest of Meshal's commented, "Khalid looked exquisite dressed entirely in white, except for his hands which were stained red with blood." For his own part, Meshal commented, "I could have been nervous, but with Jimmy, such a good friend of Hamas, at my side, I started to feel so at ease."

The wedding of "J-Khal," as the media has taken to calling this celebrity couple, truly was an unexpected event. President Carter told Jewlarious, "I have been sympathetic to Hamas for many years, but, at this stage in my life, I never thought that I would fall head-over-heels in love." Weeks ago, on a visit to Damascus, Carter and Meshal met across a mine-swept field. The two had dinner, jointly declared Israel to be an illegitimate aggressor nation and then danced the night away. The rest, as they say, is history. Meshal commented, "Ever since Rosalyn died, I just haven't seen Jimmy this happy." When Jewlarious informed Meshal that Rosalyn Carter is still alive, Meshal remarked, "Really? Nothing a suicide bomber can't take care of. Who wants seventy… no eighty virgins!" 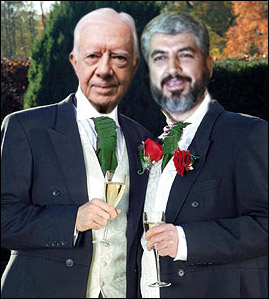 Israeli intelligence reported and high-ranking Hamas sources confirm that guests included Tim Robbins and Susan Sarandon, Brad Pitt and Angelina Jolie, Mohammar Khaddaffi and Jane Fonda. Mahmud Ahmenadinajad served as the couple's flower girl. Guests walked away from the wedding with gift bags which included Jimmy Choo's, Godiva Chocolates and a Kassam II Rocket among other baubles– valued at $2MM. Regardless of their high-profile wedding, Meshal and Carter claim to be "just like any other couple" and have been asking for their privacy since their nuptials. According to Meshal, the two have been "keeping it real," waking up late and walking to a Damascus Starbucks or driving there in their brand-new Prius.