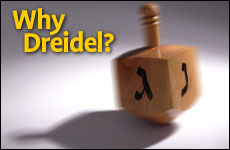 On Hanukkah we recognize the miracle of nature.

There are many different customs associated with the Jewish holidays. The meaning behind some of the customs is readily apparent. Eating latkes and doughnuts fried in oil on Chanukah (Hanukkah), for example, recalls the miracle of the flask of oil that lasted eight days.

The significance of the dreidel, the four-sided top with Hebrew letters on each side, however, is not as clear. Some suggest that the dreidel was invented at the time of the Syrian-Greek decrees against the Jewish people. One of the prohibitions was the study of Torah. Fearlessly, the Jews continued teaching and studying Torah in secret. Should a Greek soldier appear, they would hide their books, pull out tops and play with the children.

Let us explore a deeper interpretation of the dreidel.

During the Second Temple era, a small band of Jews fought valiantly against the great Greek armies, miraculously overcame them and regained religious freedom. Although the war did not end for several years, on the 25th day of Kislev the Jews resumed kindling the Menorah in the Temple. All the flasks of oil had been contaminated by the Greeks, yet one little sealed flask was miraculously found, containing enough oil to burn for one night. Another miracle occurred and the oil burned for eight days, until they could procure new oil.

The name “Chanukah” is a contraction of the words chanu kaf-heh, “they camped [and rested from war] on the 25th day of Kislev.” It seems strange that the name of the holiday recalls the lull in the fighting instead of the final victory itself. Why celebrate the job before it is completed?

A miracle is a break from the natural routine.

Let us understand the role of miracles in general and the Chanukah miracle in particular. The Sages teach that there is no real difference between nature and miracles; God’s hand guides everything in the world. However, we sometimes are so distracted by our routine that we fail to see God’s hand around us. “Nature” is really nothing more than the breathtaking beauty and symmetry of God’s Creation becoming routine. The purpose of a miracle, a break from the routine, is to draw our attention to God’s control over all areas of life – even the natural.

That is why the holiday was named Chanukah, reflecting the lull in the war. It was only then the Jews had a chance to stop and consider the Divine assistance rendered during their lop-sided battles – something they had not appreciated in the midst of war.

This may help us understand another question often asked about Chanukah. The little flask contained enough oil to last for one day, so the miracle was really only for seven days and not eight. Then why is Chanukah celebrated for eight days?

We fail to see the fascination in the mundane.

The answer lies in the same principle. We take it for granted that oil can fuel a flame, whereas apple juice cannot. But why should that be so? Why does the juice of one fruit fuel a fire, while that of another actually extinguishes it? We have become so accustomed to the routine that we fail to see the fascination in the mundane. The extra day of celebration awakens us to see God's hand in the natural as much as in the miraculous.

Which brings us back to the dreidel. Written on the sides of the dreidel are the letters nun, gimmel, heh, and shin, representing the words nes gadol haya sham, “A great miracle happened there.”

While the dreidel spins, the letters disappear in a blur and are visible only when coming to a stop. The dreidel represents how we – immersed in the dizzying hustle-bustle of daily routine – cannot see the miracles regularly happening all around. Only when we stop to reflect are our eyes opened to the miracles that were there the whole time.

Rabbi Ephraim Nisenbaum is the founder and director of the Jewish Learning Connection, an adult outreach organization in Cleveland, OH. He has authored The Narrative of Faith Haggadah (Feldheim), Powerlines: Insights and Reflections on the Jewish Holidays, and 49 Steps to Greatness, published by Targum Press.

Chanukah Eyes
Faith: the Axis Upon Which the Wheel of Science Turns
Love - Not Just About Chemicals Anymore!
Is There a Moral Code in a Virtual World?
Comments
MOST POPULAR IN Chanukah
Our privacy policy