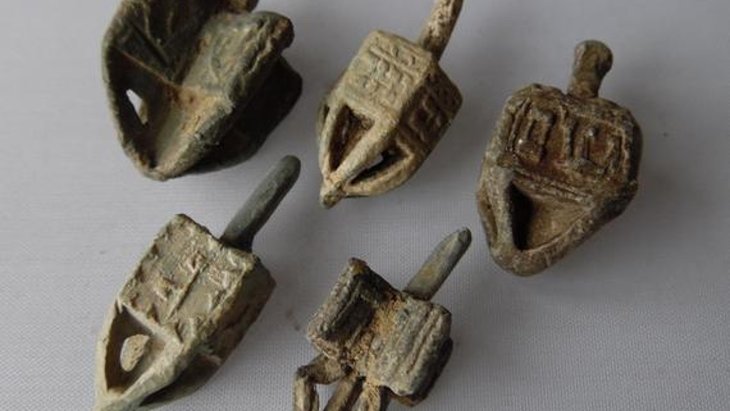 Dreidels symbolize deep spiritual concepts and have a fascinating history.

Dreidels are a beloved part of Hanukkah celebrations the world over. And they're far from being simple playthings; dreidels symbolize deep spiritual concepts and have a fascinating history. Here are 8 little-known facts about them.

One popular explanation for dreidels’ connection to Hanukkah is they were used by Jewish children who defied the wicked King Antiochus’s decrees against learning Torah.

In 175 BCE, King Antiochus Epiphanes took control of the area including present-day Syria, Lebanon and Israel and instituted harsh decrees against Jewish life. Under his rule, Jews were forbidden from keeping Shabbat and Jewish holidays, ordered to eat non-kosher food, expected to worship Greek idols, and were banned from teaching or studying the Torah. 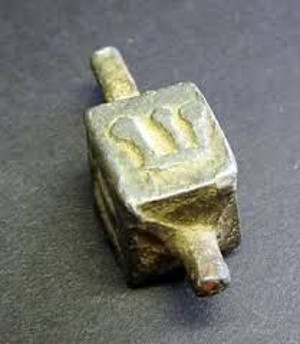 Jewish teachers and parents persisted in running clandestine schools. At the time of Hanukkah, Jewish teaching was done orally and it was necessary for students and teachers to work together in person in secret schools. Getting caught would likely lead to death.

Students kept a gambling toy similar to a dreidel in their pockets. If Greek soldiers raided these secret schools, children would quickly take out their spinning tops and some coins and explain that they were just playing games. This trickery allowed a generation of Jewish children to continue to study Torah and live clandestine Jewish lives.

From Ancient Greece to Modern Europe

It seems that spinning tops like dreidels were popular throughout the ancient Middle East. The different sides of the top each symbolized something different, much like modern dice, making the tops ideal for playing gambling games. Ancient Babylonians used blocks similar to dreidels to gamble: pictures of different gods symbolized winning and losing. One elderly Jewish woman I know who grew up in Egypt explained to me that her community had a long tradition, going back generations, of using animal bones to make dreidels and other gambling toys.

Some historians believe that ancient Roman soldiers brought these simple dice-like games played with four-sided spinning tops throughout the Middle East to England. There the games became exceedingly popular, and by the Middle Ages English children and adults were playing a dreidel-like gambling game. Reflecting the Roman origins of the game, these English tops had the letters A, D, N and T on their four sides. These stood for the Latin Aufer (“take” – take a coin from the pot), Depone (“put” money into the pot), Nihil (“nothing” – do nothing on that turn) and Totum (“everything” – win all the coins in the pot). The game quickly became known as Teetotum, a corruption of the Latin word Totum, which was the luckiest spin. 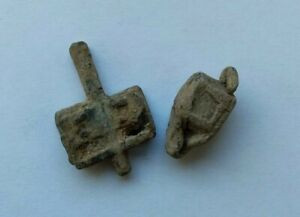 By the 1800s, the letters on Teetotum tops used in England and Ireland were usually in English: P (for “put a coin in the pot”), H (for “take half the pot”), N (for “do nothing”) and T (for “take everything”). The game also spread to German-speaking areas in Europe, where letters for German words were substituted: N (nichts, or do nothing), H (halb, or take half the pot), S (stell ein, or put in), and G (ganz – take everything). The German name for this popular game was Torrel or sometimes Trundl, which means “roll” or “spin” in German. The game was popular with Yiddish speaking Jews in Central and Eastern Europe, who changed the pronunciation of the name to Dreidel.

The game was often played around Christmas time, and it seems that Jews began playing Dreidel in the mid-winter too, changing the letters from German to Hebrew, “nun”, “gimmel”, “hey” and “shin”, signifying the phrase Nes Gadol Haya Sham, “A great miracle happened there”, referring to the Hanukkah miracles.

The dreidels’ Hebrew letters nun, gimmel, hey and shin don’t only stand for Nes Gadol Haya Sham (A great miracle happened there); some scholars point out they contain deeper meanings, too.

The great Chassidic scholar Rabbi Tzvi Elimelech Shapiro (1783-1841) noted that the dreidel’s four letters correspond with four ancient kingdoms that tried and failed to destroy the Jewish people. Nun represents Nebuchadnezzar, the Babylonian leader who destroyed the first Temple in Jerusalem. Gimel stands for Gog, or Greece, which tried to eradicate the Jewish religion in the time of Hanukkah. Hey stands for Haman, the wicked minister in ancient Persia who wanted to commit genocide and wipe out the Jews and whose defeat is remembered during the Jewish holiday of Purim. Shin stands for Seir, or ancient Rome, which destroyed the second Temple in Jerusalem and ended Jewish rule in ancient Israel for nearly two thousand years. 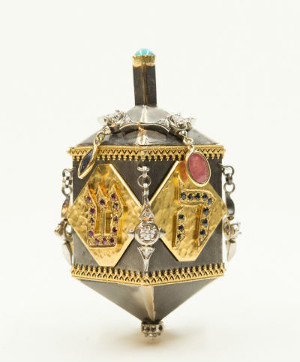 Another symbolic way of looking at the dreidel’s Hebrew letters represents the divine aspects of a human being: Nun means Nefesh, Hebrew for “soul”; Gimmel means Guf, Hebrew for “body”; Shin is Sechel, “understanding” in Hebrew; and Hey stands for "Hakol", which means “everything” in Hebrew, because the other three letters make up all of a person’s core qualities.

In Jewish mystical thought, Rabbi Tzvi Elimelech taught, these four parts of a human being correspond with the kingdoms that tried to destroy us. The Babylonians destroyed the first Temple in Jerusalem and took thousands of Jews captive: this was an attack on the Guf, the body, of our people. Later on, the Persian Empire tried to seduce the Jews with their luxuries; this was an attack on the Nefesh, or soul, of the Jewish people. The ancient Greeks offered competing philosophies to Judaism, attempting to turn traditional Jews into assimilated, or Hellenized, people who worshipped Greek gods and understood the world using Greek philosophy. This was an attack on the Jewish people’s Nefesh, or soul. Finally, the ancient Romans attacked the Jewish people using all three means, assaulting Jews Hakol, in all ways. The dreidel’s letters remind us of the many times Jews were under threat.

Echoing both the lowest and the highest reaches of Jewish history, the letters of the dreidel remind us that Jewish history is ours to shape; through our actions we have the power to raise our Jewish nation up. The fact that the letters remind us of the Messiah also reassure us that no matter how much danger the Jewish people seem to be in, God will never abandon us.

In Israel, dreidels are known as Sivivonim, from the Hebrew word sov, meaning spin. When Jews from Central Europe began returning to the Land of Israel in the 1880s, they brought dreidels with them. No one knows for sure who coined the word sivivon. The Zionist Jewish writer David Isaiah Silberbusch (1851-1936) took credit for inventing the word, but some people maintain that Itamar Ben-Avi, the first native speaker of modern Hebrew (his father Eliezer Ben-Yehuda wrote a Hebrew dictionary and raised his son to speak only Hebrew). Itamar was born in Israel in 1882 and is thought to have named the Sivivon in 1887, when he was five 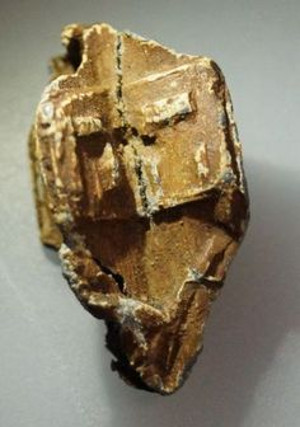 Sivivonim differ from dreidels in a key way: they read Nun, Gimmel, Hey, and Pey (not Shin). This signifies Nes Gadol Haya Po, or a great miracle happened here (not “there”).

Dreidels are made out of all sorts of materials, but silver and wood seem to be especially traditional. The great sage Rabbi Moses Sofer (1762-1839), also known as the Chatam Sofer, used to make a point of playing with his children using a silver dreidel on Hanukkah. This might have been to fulfill the Jewish commandment of hiddur mitzvah, to beautify the mitzvot that we perform.

Rabbi Tzvi Elimelech Shapiro suggested that it’s most fitting to use a wooden dreidel because of the Prophet Ezekiel’s vision of the end of exile, when the names of all the Twelve Tribes of Israel will be written together on a wooden tablet (Ezekiel 37:15-28). This section of the Torah is read in synagogue near the holiday of Hanukkah. 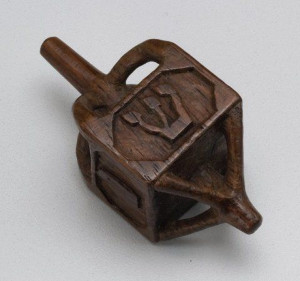 Rabbi Tzvi Elimelech Shapiro also compared dreidels with groggers, the noisemakers used on Purim to drown out the name of the wicked Haman when the Megillat Esther is read on synagogue. Each toy carries a hefty symbolic meaning. On Purim, when we hold the grogger from the bottom, we can’t see our hand controlling the toy. This reflects the nature of the Purim miracle, in which the hand of God was concealed; His many miracles were only visible after the fact when people pieced together a series of seeming coincidences.

On Hanukkah, however, we spin dreidels from the top; our hands (symbolizing the “hand” of God) are clearly visible. This is like the events of Hanukkah, in which God clearly wrought miracles for our ancestors as they fought the Syrian Greeks. (Click here for a more in-depth look at the difference between dreidels and groggers.)

How to Play Dreidel

Playing dreidel is easy and fun. Here’s one popular version. Start by having each player put a coin (or a piece of candy, or a token) into the middle; this is the “pot”. Take turns spinning. If your dreidel lands on a Nun, do nothing. For Gimmel, take the entire pot. (Then have everyone place a coin back in to replenish the pot.) If your dreidel lands on Hey, take half the coins in the pot. For Shin or Pey, put one of your coins into the pot. Most of all, relax and enjoy, knowing you are part of a long Jewish tradition of using the game of dreidel to connect with Hanukkah.

Why Do We Light the Menorah with Olive Oil?

The Triumph of Hanukkah
What Makes Eli Run?
The Tyranny of Materialism
Science Enters the Mysterious Inner World of Consciousness
Comments
MOST POPULAR IN Chanukah
Our privacy policy