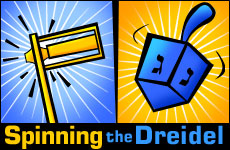 The discrepancy in how the Hanukkah dreidel and Purim gragger are spun reflect a profound lesson in the nature of the two holidays.

On Hanukkah and Purim, Jews are fond of spinning objects. It is not just the youngsters who take in hand the dreidel (Chanukah top) and grager (noisemaker). But there is a noticeable difference: During Chanukah we spin while holding the protruding top piece of the dreidel; on Purim, however, we hold the grager from the bottom part and then begin to turn.

This discrepancy is no mere coincidence; it actually conveys a profound lesson.

Rabbi Tzvi Elimelech Shapira, author of B'nei Yissaschar, explains the difference as follows: God wishes to constantly bestow only abundant blessing upon His nation, but we must initiate with an "inspiration from below." If we create an opening the size of the "eye of a needle," then God, in turn, will respond by "opening up the gateway to a large banquet hall." (Shir HaShirim Rabba, 5:3)

In other words, if we but take the first step - even a miniscule one -- in performing good deeds, God will reciprocate with an outpouring of supernatural kindness from the heavens above. Through even small amounts of Torah, repentance, and mitzvot, we can open the gates to allow for boundless "inspiration from above" to come our way, often taking even the form of miracles.

In the days of Purim, their lives hanging on a delicate thread, the Jewish People united in sincere prayer and repentance to create an inspiration from below worthy of God's promise to reciprocate. Their collective efforts to rescind the harsh decree issued against them were successful in opening up the gates of heaven for many hidden miracles that brought about their salvation. With the tremendous effort of repentance on the part of the Jewish People, Haman was subsequently destroyed.

Thus while reading the Scroll of Esther on Purim, we spin the grager from below upon hearing Haman's name to proudly demonstrate that the Jewish people initiated the overwhelming response from the heavens above; first the bottom part spins, and only then does its upper part follow in kind.

On Chanukah, however, our prayer and repentance were not as sincere. A mere handful of Hasmoneans led the charge, while most of our nation failed to display the requisite inspiration from below to warrant abundant blessing from above. And yet God showered us with miracles regardless. He provided us, mercifully, with inspiration from above, although we were undeserving of His open involvement. The miracles arrived and we emerged the victors; we re-dedicated the grand Temple and lit a miraculously burning oil.

On Chanukah we spin dreidels upon which are inscribed the first letters of the words, "neis gadol ha'yah sham" -- a great miracle happened there. We rejoice with our dreidels, but we spin them specifically from their top part to constantly remind ourselves that Chanukah was a time when miracles came gratis, when God bestowed His infinite compassion upon His people and things began to spin down to us in the form of undeniable miracles.

On Purim the spinning is from below, on Chanukah it begins from above.

This difference is also seen in how we play with these items. People often "play the dreidel" by spinning it for money. Whether it lands on the "gimmel" and the winner takes the whole pot, or the "shin" and money is lost -- one is at the mercy of a fate totally outside his control. We're also unsure as to how long the spinning will last. If we don't take the initial step in triggering God's promise to reciprocate in disproportionate fashion favorable to us, then we leave ourselves up to simply hoping for the best, wishing for God's undeserved mercy.

Purim time, on the other hand, we can all spin our noisy gragers as a sign we've played a role in bringing about Haman's demise. Just as the cacophony emitted from our gragers is not at all pleasing to the ears, our fasting, crying, and heartfelt repentance might not always look so pretty either. But it gets the job done. When we do our part, we can rest assured that God will do His. And thus, as opposed to the Chanukah top left to spin on its own, the grager's spinning duration is controlled by us.

This distinction is fleshed out in the contrasting liturgies of the two holidays as well. In the prayer known as the "Al HaNissim," we find mention in the passage for Chanukah of God having fought their [the Jews] battle, and having avenged their vengeance.

In the blessing recited at the conclusion of the reading of the Scroll of Esther, however, we encounter instead: "You [God] fought our battle, avenged our vengeance." To consider it our battle, our war, and our victory, we must take the all-important initiative. It was specifically on Purim that we, as a unified nation, took collective action in a heartfelt effort to inspire and evoke God's boundless mercy and compassion. We all put in the time with several days of serious and sincere prayer and repentance.

In stark contrast, the miracle on the battlefront against the far superior Greek army was a total gift from God in response to the noble sacrifice of but a few select individuals.

This Chanukah, let's get the inspiration started from below. We must do our utmost to unite as a nation, to work together as individuals and as a People on growing in all areas of spirituality, and hopefully we'll trigger God's mercy and miracles like never before. Let's increase our charity, good deeds, dedication to prayer, and let's start spinning those dreidels upside-down!

Rabbi Eytan Feiner currently serves as the full-time Rav of Congregation Kneseth Israel, more popularly known as The White Shul, in Far Rockaway, New York. He also delivers monthly shiurim at Lander's Yeshiva and at Machon Basya Rochel Seminary, lectures extensively throughout the New York area and beyond, and is the summer Rabbi of Chai Lifeline's Camp Simcha. Rabbi Feiner previously served as a Maggid Shiur and Senior Lecturer at Aish HaTorah in Yerushalayim, taught weekly in Yeshivat HaKotel, Michlala, the Gra Shul in Sha'arei Chesed, and at various Yeshivot and Seminaries throughout Eretz Yisroel, and lectured for the popular Gateways programs.

Alexander the Great and the Jewish High Priest
Where Do the Laws of Nature Come From?
Saadiah Gaon, Rashi and Maimonides: How Three Rabbis Revolutionized Judaism
King Sennacherib and the Siege of Lachish
Comments