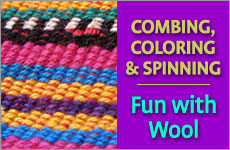 We now continue with processing the wool we've just cleaned. Our next job is to arrange it so that the fibers become smoother and straighter. This activity is known as Menapetz,1 and may be done by beating the wool, picking through it, or combing it. Since this last method is the most effective and common, we use it to define this melacha.

There are only a few applications of Menapetz.

Combing a wig – A sheitel is the traditional name for the wig that many observant women use to cover their own hair. They may be made of human hair, synthetic hair, or a combination. Combing the sheitel so that the hairs are in place is considered an act of Menapetz according to some opinions.2 To avoid this issue, a woman may use a soft-bristle brush or wide-toothed comb that will improve the sheitel's appearance, but will not closely align the fibers.3 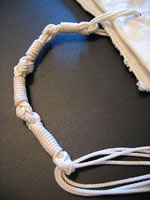 Untangling tzitzit – Let's move over to the men's side now. Tzitzit, the fringes that many observant men wear, are made of tightly tied wool, and attached to a light garment that is worn underneath a man's shirt. If the tzitzit fringes become tangled, a person is not allowed to disentangle them on Shabbat, since this closely resembles combing out wool.4

In the Mishkan, three specific colors of wool – scarlet, blue and purple – were required,5 so it was necessary to dye the wool once it had been cleaned and combed.

This melacha, called Tzovaya,6 is actually very relevant today. Tzovaya may be defined as "creating a more suitable object by changing or strengthening its color."7 This melacha is a good illustration of a basic principle underlying the laws of Shabbat: 'creative labor' is forbidden, regardless of the amount of effort it takes.

Now, in order to be considered Tzovaya under Torah law, the action has to result in a "lasting" form of coloring. That is, the coloring needs to remain in place for at least a short period of time. This is because the classic case of Tzovaya is dyeing fabric, which is actually a permanent form of coloring. However, even coloring that lasts only briefly is considered to be Tzovaya under rabbinic law.8

In practice, then, there are only a few examples of coloring that is so temporary that it is permitted on Shabbat. One of these is photo-gray lenses (the kind that darken automatically in sunlight and then fade to normal indoors).9

What comes to mind when we think of "coloring"? There are some obvious examples, such as painting your house (or anything else) and drawing a picture.10 (And these activities are, indeed, not allowed on Shabbat.)

An important, and common, application of Tzovaya is putting on cosmetics. Almost all types of makeup – including blush, lipstick, eye shadow, nail polish, and so on – are intended to add color to a person's body. As a general rule, then, putting on makeup during Shabbat is not allowed.11

This halacha probably comes as a surprise to many readers. Indeed, many observant women do not use makeup on Shabbat. Nevertheless, a couple of qualifications are in order:

In fact, there are cosmetic products on the market that are advertised as acceptable for use on Shabbat. If this sounds tentative, it is – this is a complex area of halacha, and each product should be researched before being used.13

Finally, it is permitted on Shabbat to 'remove color' – e.g. by washing makeup off one's face.14

Perhaps the most common kind of "coloring" we do takes place in the kitchen. Whenever we combine foods, the colors mix with each other. This would seem to be a major issue, but actually there is a principle in halacha of Ain Tzovaya B'ochlin – "there is no (prohibition of) coloring regarding foods." Why? Because food is meant to be consumed, and so is different from dyed wool or other items that we color and keep for ongoing use.15

What this principle means is: If you add an ingredient to food to make it taste better, the fact that the food's color will change is not a problem.16 Similarly, if you have two foods next to each other on your plate – a good example would be turkey and cranberry sauce – the fact that the color of one will rub off on the other is also fine.

This principle does not include coloring food merely for decoration. So adding food coloring which adds no taste and only makes the food look better is an act of Tzovaya and is therefore not allowed.17

Finally, there is the issue of coloring that actually makes something look worse. The classic example is wiping up a dark spill (e.g., wine) with a clean white cloth. To be sure, the cloth gets colored, but not in a way that a person wants. As a result, many authorities say that this kind of coloring is permitted on Shabbat.18

Other authorities don't like this exception. They recommend that we should wipe colored stains with a cloth that is (1) not white and (2) not the same color as the stain.19

Disposable cloths (such as napkins and paper towels) can be used according to everyone. There's no issue of improving their appearance since they are thrown out right away.20

(It is important to take care in handling a paper towel that is fully saturated, as moving it will inevitably cause liquid to be squeezed out, which is a prohibition of sechitah – see Lesson #9.21) 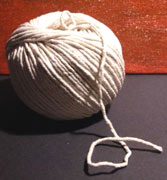 Once the wool was dyed in the Tabernacle, it needed to be spun into a form that could be used to create fabric. Such spinning is known as Toveh,22 and was accomplished by twisting the individual strands of wool into a stronger, "continuous thread."23

The idea behind Toveh has little application outside of spinning thread or some other fiber (for example, twisting cotton to form a wick).24 These would be prohibited whether the spinning is done by hand or using a spinning wheel.

Laws of Shabbat
previous
Article #27 of 34
next
Like What You Read?  Give Jews around the world the chance to experience engaging Jewish wisdom with more articles and videos on Aish. It would make your mother so proud and as a nonprofit organization it's your support that keeps us going. Thanks a ton!

25. Gozez: No Need to be Sheepish
Vayelech 5783: Regret and Repent
Rabbi Sacks: Focus On the Important, Not the Urgent
Put Your Foot Down: Are Human Feet Poorly Designed?
Comments
MOST POPULAR IN Jewish Law
Our privacy policy
Aish.com Is Looking for Great Writers