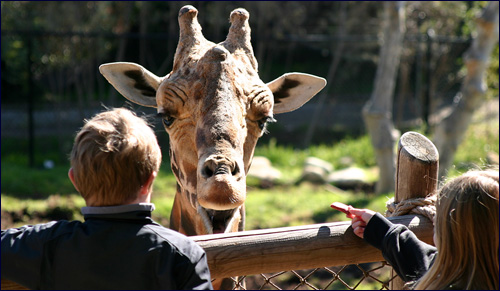 Some fun ideas to do with your family during Sukkot.

It’s not easy to come up with places to go during Chol Hamoed Sukkot when observant Jewish families often go on day trips. But if you don’t think about it beforehand, nine times out of ten you’re going to end up at the zoo. Or on a hike.

Technically, all outdoor walks are nature walks. You walk to shul – that’s a nature walk.

Everything you can think of to do sounds exactly like everything else that you’ve already done, which is why it’s so hard to think of anything.

And that’s why, every year, I work long and hard to come up with a list of day trip ideas. Okay, so I don’t work long and hard. Most of my research for this article involves going on day trips. But it’s tax deductible, so I count it.

Okay, so all walks are nature walks, unless you do them inside. You walk to shul, it’s a nature walk. Especially if, as I do on my way to evening prayers, you smell a skunk almost every night.

You also have to make sure that the kids are aware that it’s a nature walk. We took a nature walk once, and we got back to the car, and my kids asked, “That’s it?” The whole time they were assuming we were walking TOWARD something.

They do know what walks are, but for most of our walks, we generally don’t drive to the place we want to start walking and then take the most extended winding route back to our car, which is where we came from in the first place.

It’s also hard to tell what you’re going to see on a nature walk. Trees, probably. The animals don’t just hang around waiting to be seen when they hear you trudging through the woods and yelling at your kids that they shouldn’t run ahead of you because what’s their rush to get back to the car? This is it!

At least with museums, you know the stuff is going to be there. It’s not running away when it hears you coming. Basically, a museum is a zoo for inanimate objects, and it’s where you go if you enjoy looking at the back of people’s heads while they’re feigning interest in whatever ancient relic is on display. The difference is that in a zoo, the animals are locked up so they can’t hurt you. In a museum, nothing’s going to hurt you. It’s locked up so you can’t steal it. You paid all that money to look at their old stuff, and they’re saying they don’t trust you.

You trusted me enough to take my money.

So you’re just browsing. But you’re not allowed to buy anything. Actually, zoos don’t let you buy any of the animals either.

But with museums, the only thing you can really do is look at a bunch of stuff you can easily see in a book or on your computer, but without heads in the way. But at least in a book, you can skip over all the boring parts without feeling guilty about it. Whereas in a museum, you have to stop every ten feet and pretend you care about whatever’s written on the little placard below every display; otherwise you look like some maniac who paid 30 bucks to power walk through the Middle Ages.

I’m all for history, but seeing the gun that killed Abraham Lincoln is not going to do anything for me. I’m going to say, “Oh. That was the gun.” And that’s it. It’s not like it was a special kind of gun that shot top-hat seeking missiles. Did they steal this from police evidence? And you know, if the museum would have gotten their hands on this a few hundred years ago, the guy wouldn’t have been able to kill Lincoln. Where were they then? After he kills Lincoln, THEN you take the gun? How about, “This is the gun that almost killed Lincoln. But we took it”? Something tells me these people are only in it for the museums.

If you want to see actual history, though, you’re a little too late. Maybe you should have been born earlier. Your other option is visiting…

A lot of people like to visit the Amish, because the Amish lack simple things like cars, so they sure aren’t coming to visit us. One Amish home that I visited had something called a “cucumber pump”, where, thanks to the miracle of colonial technology, you didn’t have to pump the water yourself. Instead, it was tied to a rope that went all the way across the farmyard to a water wheel that was being turned by a brook. In other words, the brook turns the wheel which pulls the rope which pumps water out of the well. Because otherwise where would you get water?

Another reason people see the Amish is that they hope to be able to watch a barn raising, which is when the entire town gathers together and builds a barn in one day. (You should really go with Amish contractors.) The Amish would also be handy to call if you need to put up a sukkah, and the holiday snuck up on you. But you’d have to hang the light bulb yourself.

Another place you can walk around and not really buy anything is the mall. But there are other things to do there. Some malls have ice skating rinks, bowling alleys, arcades, indoor amusement parks… There is also always a fountain for some reason. It think it’s the law. Basically, they figure that when people get change from the stores, they throw it into the fountain, and that way, the mall gets ALL the money. Also, occasionally there will be a news story of someone falling into the fountain while texting. That alone is enough reason.

There are also some rides. A lot of malls, for example, have carousels, which consist of a bunch of horses suspended on enormous skewers, and they’re great to go on if you want to feel like you’re in a stampede of horse kabobs running in circles to music. And occasionally there’s a freakishly huge rabbit.

They also have a little ride that looks like a car or a fire engine, where you put money in and it does nothing. It shakes a little. But your kids love it, because they feel like they’re actually in a car! As opposed to the car they took to get there which they hate. But this car is different! It just plays music and shakes, but it doesn’t go anywhere!

Okay, so it’s pretty spoiled of me to say that. When the Amish want to go on a Ferris wheel, they have to use a water wheel, which is a lot of fun, except that when they get to the bottom, they have to hold their breath. Also, their horses go in a straight line. And they don’t have those little cars that do nothing. So we’re pretty lucky.

The Writers Strike Back

The Compulsion to Coupon