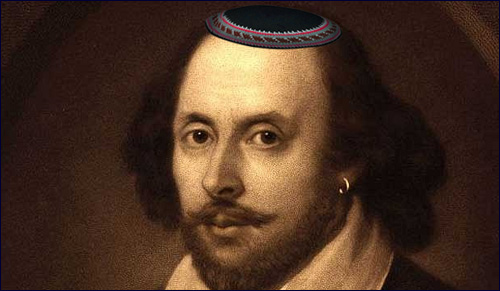 Shakespeare’s Jewish connection, and a scene from my Jewish rendition of Hamlet, called “Hemlet.”

One day before the Stratford Shakespearean festival, Faivish Hershfeld, originally from Pinsk, showed up to audition, telling the director, “I vant to be en hectah. I vant to play Hemlet.”

“You want to be a Shakespearean actor?” asked the startled director. “I’m sorry ... perhaps a walk-on part –

“Oh alright,” said the director, chuckling, as the old man stepped onto the stage.

The director, cast, crew stood spellbound. When he finished, the director exclaimed, “Why ... that’s fantastic!”

We recently marked the 452nd Birthday of the British Bard, who, while not Jewish bore a resemblance. After all, in 38 plays, 154 sonnets, plus poems and verses, the man made a big tsimmis from tragedies and asked a lot of questions-eth. Perhaps this is why We Jews loved to futz with his plays in the Yiddish Theater. As far back as 1901, the People’s Theatre on New York’s Lower East Side put on The Merchant of Venice. Now, apart from issues surrounding Shylock, the play, a tragicomedy, is something We Jews know about. Face it, it’s not that it only hurts when we laugh--we only laugh when we hurt. Needless to say, it was such a hit it went to Broadway, and polished Yiddish theater’s, Jacob P. Adler’s Jewish star. Shakespeare in Mamaloshen became a hit among Jews. King Lear was among the most popular. Author Tim Boxer writes about the time Walter Matthau was in a taxi, driven by a man with a heavy Yiddish accent.

He said to Matthau: “Aren’t you an actor?”

“What are you doing?”

To which the driver responded, “Really? Do you think it would go in English?”

The Jewish connection gets tighter. Most people know or heard that for years there’s been a megillah over “did he, or didn’t he?” write his own material. For 200 years Francis Bacon was #1 in the great “real” Shakespeare Hunt. Other popular "real Shakespeare" candidates include Edward de Vere, the Earl of Oxford; Christopher Marlowe; and even Queen Elizabeth I.

Ah, but one amateur Shakespearologist, John Hudson, is convinced that a lantslady, an Italian Jewess Converso named Amelia Bassano Lanier (1569-1654) was the true bardess, or at least a “consultant.” In fact her name is on the list of “possibles” created in 2006 by the Shakespearean Authorship Trust.

The emmes? Well, “he” did answer heavy questions – with questions. “To be or not to be?” (Very Jewish).

“I have not slept one wink” (Cymbeline)

“It smells to heaven” (Hamlet)

“My own flesh and blood” (The Merchant of Venice)

“The first thing we do, let's kill all the lawyers” (Henry VI, part 2)

Personally, the gal has a shot. Between a Brit and a Jew, who would ask so many questions?

Tis a mystery to be so challenged. So nu? Another Jewess (me) moved my mouseth to see “Could it be?”

In honor of the Bard’s 452nd Birthday, I give you my version of “HEMLET.” (My sincere apologies to Shakespeare whomever he/she may be, Yiddish speakers … and anyone who has ever read or seen – a play. Feel free to edit.)

Whether ’tis nobler for a Jewish prince, to merely kvetch over

The slings and arrows of mine neighbors which is some outrageous umglick?

Against such a sea of tsouris

And by opposing, on the one hand, finish them offish? On the other hand do I need start up and perchance forever gey shlufn? Shtarb?

And by “shtarbing” would I be saying “enough already” with …

the heartache and the cockamayme insults by the “shvein” our

Jewish fleishig are heir to, ‘tis maybe a mitzvah?

To shtarb: And mayhaps to dreameth? Oy, there’s the rub, nu?

For in the shluf of shtarb what dark dreameth may cometh

When we have shuffled off the stuffeth of this chazzerai?

For who could bear all the tsouris that shlepeth on?

The pangs of “poo pooing” mine enemies?

The insolence of the Golem who prey on thy kishkes? Pray, a nudnik?

On the one hand … a man could shtarb himself, nu?

On the other … as the Good Book says, not only is self-shtarbing sin … but alas, might things be worse? Could I be smoten? Do mine questions leave me alas, fartoost?

And make me bear the chalushes

Than fly to maybe a worse kapporah?

Gottenyu! Does not the guilt makes nayfish of us all?

On the other hand … doth methink mine Yiddishe kop gevaltizes?

For this loch in kop … A waste?

Vey is mir … must I end this meshugas in haste?