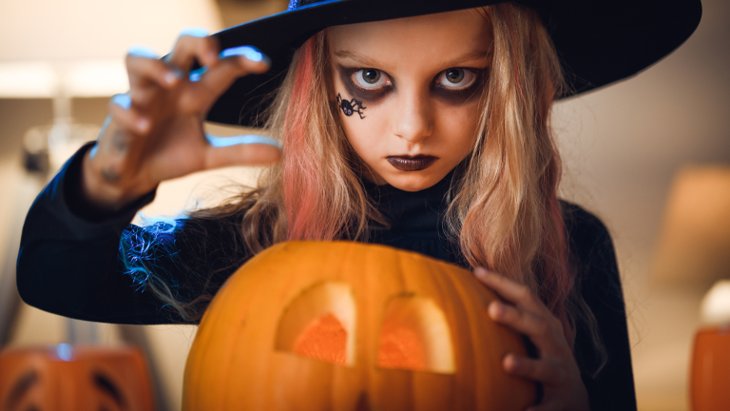 On October 31st instead of Mr. Goodbars I’ll be offering Mr. Menschbars.

It all began at my local grocery market when I realized I had no challah for the next night, which was Shabbos, and so against my better judgment I went out on the cold, dark and rather spooky evening of October 31st. Cautiously I made my way to the side of the store where I usually found all things Pareve for my Shabbat meal, passing outlandish costumed procrastinators chaotically rushing in to purchase huge bags of fun-sized Snickers and Milky Ways so neighborhood trick-or-treaters could visit them in droves. Oy!

When I unexpectedly slipped on a small, round hard object and fell to the ground hitting my head, the last thought I remembered having was how ironic that it should be a Lifesaver candy.

Then, I entered a strange world, it felt almost like a dream…

A wicked witch leered down at me and cackled that I wasn’t in the Kosher section anymore. Behind her stood a scarecrow, a man of tin, and a lion, and all three characters offered to take me to The Wonderful Wizard of Oys to help me find my way back on a night when no Jew should ever venture anywhere near a candy aisle.

But what in the world was going on here? As I glanced on the shelves above me, I saw familiar wrappers and brands I’d known since childhood, but with newish Jewish names. Packages of Tootsie Rolls were now labeled “Schmootzie Rolls.” Mr. Goodbars had become Mr. Menschbars, bubble gum was called “Bubbe’s Gum,” bright red licorice sticks were marked “Licorice Shticks” and Smarties had been renamed “Mavens.” I rubbed my eyes and did one last double-take as I recognized the entire Hershey’s milk chocolate line had now morphed into “Herschel’s.” Really? What kind of confusing message did this send on this night in particular?

As dozens of colorful “little people” marched through the store down a pathway lined with golden bricks of matzah, holding lollypops and singing merrily, I recognized them as none other than “The Mashuganakins.” What kind of mishagoss would happen next in this strange faraway land? Would Jews now look forward to buying “Three Mushkateers” bars? I think not!

Recently I explained to my neighbor why I don’t celebrate Halloween. Nonetheless, she suggested I dress up as a black cat and exclaim, “Meowzel Tov!” to all the children who came to our house. I smiled feebly while advising her not to give up her day job.

Impatient for answers, I strolled past a little man behind a drape who appeared to be carving a pumpkin as I warned myself, “Pay no attention to the man behind the curtain!” and instead made my way over to a green corner of the market with a sign that said, “Welcome to Emet City” and there I beheld a beautiful woman dressed completely in white who was a dead ringer for Glinda – only she introduced herself as Glatt, the Good Witch of the North. Aha! I must be closer to the Kosher section than I realized.

Glatt told me I had always possessed the power within myself to go back and I started to scoff, assuming next she’d have me click my red shoes together. But instead she instructed me to rise up on my heels three times and recite, “Kadosh, Kadosh, Kadosh.”

And that’s when I awoke on the floor of the supermarket with a wet rag across my forehead and the Rabbi from my shul standing over me with a concerned look on his face. “They told me you hit your head and were behaving oddly,” he said. “This is not the place for you tonight. What have you learned should be the proper holiday to dress up in costume for?”

I actually knew the lesson all along and didn’t hesitate to say it loudly and proudly to all the onlookers who had gathered around me. “There’s no place like Purim. There’s no place like Purim,” I chanted and as I sat up, resisting the strong urge to sing about a rainbow, but instead I excitedly began to make plans for my future Queen Esther costume this coming March. Hey, it could happen!