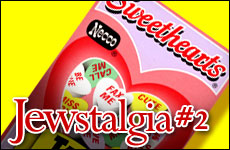 Join me on another trip down memory lane.

They've all "gone missing" – and I miss them, the times, the places, the smells of my youth. "The Candy Store," for one, had an aroma of distinction that defies duplication! Years, it takes, to get the precise combination of old newspapers, U-Bet, sour balls, and salt dust. But should I ever be in a coma ... a single whiff and I'd be doing the Hora.

This is the stuff of Jewstalgia!

Last week, I left off watching "The Blob," and teaching my son how to mold his teeth together with a Jujube.

This week, join me on another trip down memory lane. So let's link arms, chant "shlemiel/shlemazl" – and miss every crack in the sidewalk or you-know-what.

I was wandering, like Moses, lost between Macy's and Sears, despite the maps - who am I? Magellan?

The Neighborhood Store = The very first time I entered a "mall"... I fainted. A Tweetie in a sea of Syvlesters, these are not places for short Jewish people. Between the mass of pressing flesh, the fear of never seeing my car again (Level 12, Q3 ... Level 12, Q3 ... orange, orange, orange), and, wandering, like Moses, lost between Macy's and Sears, despite the maps (Who am I? Magellan?), I passed out. Most walked on me, assuming I was a new design feature, like a not-so-picturesque bridge. Until some nice Jewish person over age 30 would recognize a landsmen and come lead me out.

My Jewstalgia's in full force, wondering whatever happened to those small shops on the "avenue" where, long before Cheers, "everybody knew your name" – OK, your mother's name.

"I'm going to Springfield," she'd say, donning a regal walk. That's what we called our "shopping" area. And my mother was the "Sadie of Springfield Boulevard." Her Queensdom was the two blocks of stores (plus side streets) where you could find, among others, Moshe, the Kosher butcher, next to Sammy's deli, across from Switzers, the candy store, alongside Firestein's Fruit, cater corner from Abie's Appetizing, two doors down from Handelman's drug store on one side, and Maurice's Beauty Parlour on the other. All the Sadies shopped, sure. But mostly, they gossiped, advised, sent news, savored and fought with each other and the proprietors.

And all comprised a distinct community over which my mother believed to her dying day, she ruled with distinction over all the other "Sadies of Springfield."

It was proved. At her Shiva, from Seymour the fish man to Selma, her "nail" lady, each mourned my mother as "family" and told anecdotes that confirmed her exalted and beloved "Sadie" status.

More, it was an inherited title. When she took me with her, even at age ten, I was granted her status as the "Sadie-on-Becoming" at every shop. My favorite was Mr. Handelman and his drug store.

Mr. Handelman's Drugstore = Today's pharmacies are or are in mega-markets. Even if the druggist knew your name, he can't pronounce it in his native tongue, and points to impenetrable "childproof" aspirin boxes– one aisle over – next to the peaches.

How I miss my "Doc" Handelman! Part family physician, part cosmetician, part counselor, he knew more about me than I did. It was "Doc" who got me through my record-breaking chicken pox outbreak, my evil frizz during my Molly Bee ponytail stage, and those disastrous prom night zit attacks. Always on the job, he called me the minute a new straightening goo came in, to see how my allergies were doing, and remind me I'd need Midol – on Monday. It was with "Doc," I discussed everything from diets and mud packs, to picture frames, and girdle thingies. Magically, he had it all in a space a little larger than a Starbucks.

Sixty-two-year-old Isaac "Doc" Handleman was "my guy." When I went off to college, His brother Herb, the accountant, reported a significant drop in business, while "Doc's" beloved wife, Dora, reported some minor depression, both of which coincided with my departure from "Springfield Boulevard."

He wrote my parents: "Ven's mine Marnie coming home?!" The feeling was definitely mutual.

Only the nail polish was red. All 57 shades.

The "Beauty Parlor" -The last time I had a hair cut, it was in some gender-free, nickel brushed, feng shui Biosphere where strangers didn't dare look at, nevermind talk to you. No. They were entertained by plasma screens showing "Tropical fish," while sipping wine--not Manischewitz. I was in labor shorter than I waited for "Gustav Louis," the "stylist's"assistant assigned to me.

Ah ... my Jewstalgia kicked in Big Time, that time. Who would've thought I'd long to hear: "Hey, Selma?! Is she ready for her comb-out yet?!" from the mouth of Morris, circa 1959, owner-operator of Maurice's Beauty Parlour (with a "u") – and the only male allowed in "yenta centa" (as my father called it). As for decor? Green – ish. The dryers were gray. And so was the coffee. Only the nail polish was red. All 57 shades.

Every Friday morning, Morris's was to the Sadies of Springfield, a sort of insulin for the soul. Even though they hated and yes, tortured, Morris, the experience kept Ma – and her hair – perfectly balanced for exactly seven days. She got all the news in and out, took out any residual rage on Morris, and not a strand strayed under an Aqua Net force field.

I loved watching the mommies – and Morris. I loved that smell ... that unmistakable combo of "permanent" solution, orange dye, and pastrami (which they ordered in from Sammy's deli).

There they were. The females of my youth in one place. Together.

Thirty Jewish women, getting their nails polished "Tomato Blush" by Selma. Despite 15 loudly humming Conehead dryers, netted rollers, ten pounds of hardware, and cotton in their ears, somehow they heard every word said by everybody – at once.

Thirty Jewish women, who looked exactly alike when they were "done." Sophia Petrillo spit curls on The Golden Girls! And for a whole year, two blond skunk streaks. And red nails, of course.

I wasn't entirely welcome. After all, the mommies were talking about ... well, me. And their own children. Once, I overheard:

"So, my Morton the Big Shot tells me we have to buy – get this – an ‘engagement' ring, yet. From Woolworth's. A whole dollar, it cost," said Mrs. Beckman to my mother.

"No wonder my meshugge daughter's finger was green a whole two weeks!" laughed my mother in her special way – from the kishkes, with a hint of tinkle.

By the way, Morton and I were in third grade.

Back then, this was a sorority. One you can't find in feng shui salons, Wal-Mart, or Malls. One I was too young to join, and now too old to find. No. These are only found down the Avenues of Jewstalgia.

The 2010 Jewish Guinness World Records
Deep Breaths
What Happened to the Truth?
The Japanese Everything Bagel Spice Recipe
Comments
MOST POPULAR IN Jewlarious
Our privacy policy