A Brief History of Jewish Pirates 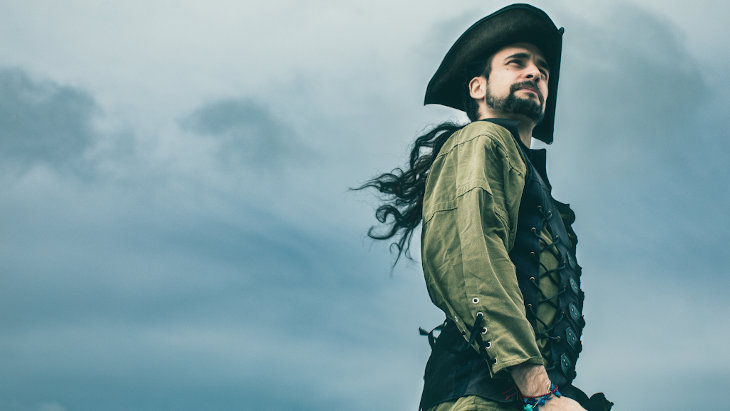 Did you hear the one about the Jewish pirate? Yes, I know, it’s the perfect topic for numerous jokes, but in this case, believe it or not, there actually were Jewish pirates. No, really! I realize that that sounds as far-fetched as Amish mixed martial arts fighters, but I kid you not. In fact, Edward Kritzler wrote a book about them. Its title: Jewish Pirates of the Caribbean: How a Generation of Swashbuckling Jews Carved Out an Empire in the New World in Their Quest for Treasure, Religious Freedom--and Revenge. And you thought your family was aggressive?

I was stunned to discover that this is not a humor book! Kritzler appears to be dead serious about the topic, at least according to the book’s description: “In this lively debut work of history, Edward Kritzler tells the tale of an unlikely group of swashbuckling Jews who ransacked the high seas in the aftermath of the Spanish Inquisition. At the end of the fifteenth century, many Jewish pirates came from families of refugees who had been expelled by Spain and Portugal. They took to piracy as part of a strategy of revenge on the Iberian powers (though lining their pockets with Spanish doubloons was no doubt also a motive). Many of these pirates mixed traditional Jewish lifestyles with their exploits on the high seas. “Hey, Yitzhak, as soon as you’re done swabbing the deck, we need you four our minyan.”

The most adventurous among them took to the seas as freewheeling outlaws. In ships bearing names such as the Prophet Samuel, Queen Esther, and Shield of Abraham, they attacked and plundered the Spanish fleet while forming alliances with other European powers to ensure the safety of Jews living in hiding. Filled with high-sea adventures–including encounters with Captain Morgan and other legendary pirates–Jewish Pirates of the Caribbean reveals a hidden chapter in Jewish history as well as the cruelty, terror, and greed that flourished during the Age of Discovery.”

Well, it may be a work of history, and the Jewish pirates may have actually existed, but it sure seemed overflowing with humorous potential to me. In fact, I could picture the flyers nailed to trees and taverns, attempting to recruit Jewish pirate ship crew members: “AHOY, JEWS FLEEING THE SPANISH INQUISITION: Are you in a hurry to leave? Have you no place to go? Have you no source of income? Do you enjoy fresh air? Do boat rides appeal to you? Do the words ‘pillage’, ‘plunder’, and ‘enslave’ vaguely excite you? Then why not consider a life of adventure on the high seas as a Jewish pirate? You can still pray and keep kosher, as long as you’re not the wimpy seasick type. Anyway, we’re hiring! Come see Captain Shlomo, at Dock 7 this Thursday between 3-6 pm. Bring a resume and your passport. We’ll provide the bagels, lox, and rugelach.”

Until recently, history books rarely noted the exploits of Jewish pirates, despite their apparent and surprising prevalence and success, but historical graveyards unearthed in the Caribbean within the last decade revealed tombstones with Stars of David, Hebrew, and skull and crossbones insignia. Other tombstones’ engravings were dead giveaways: “Yo ho ho and a bottle of Manishewitz”. “ You try keeping a yarmulke on during a severe storm at sea!” “Rather than the term ‘pirate’, my rabbi suggested ‘persuasive acquirer of merchandise and occasional people’”.

In fact, the history of Jewish pirates goes much further back than the Spanish Inquisition. Josephus, the Italian-Jewish historian, mentions Jewish pirates operating in the seas off the Land of Israel in Roman times. There is a drawing of a pirate ship inside High Priest Jason's Tomb in Jerusalem. In its last days, the Seleucid Empire (the one fought by the Maccabees) was plagued by Jewish and Arab pirates. So, apparently, pirate had long been a Jewish career option, along with doctor, lawyer, accountant, and dreidel manufacturer.

The fact that some Jews seemed to have taken so easily to the pirate lifestyle may have been due in part to other skills developed by Jews over the centuries. Cartography (the science or practice of drawing maps), for example, was considered a Jewish specialty in the 15th and 16th centuries, and Christopher Columbus is believed to have consulted the work of a Jewish cartographer, Abraham Cresque of Mallorca, who produced the Catalan Atlas in 1375. Portuguese Jewish cartographers and scientists contributed to Vasco Da Gama's voyage of discovery to the Cape of Good Hope in 1497. Jews also worked on ships as navigators. Stand-up comedy was to come later, but no doubt they were gathering material for it during these times.

The most famous of the Caribbean’s Jewish pirates, or privateers, was Moses Cohen Henriques – or as he might be known today, The Notorious MCH. His name is of Portuguese origin. Like many of his contemporary buccaneers, Henriques’s life is shrouded in mystery. Did he have a bar mitzvah? Did he celebrate Shabbat on board? What were his hobbies and interests? Was he vegan? What we do know, however, is that together with Dutch folk hero Admiral Piet Pieterszoon Hein, Henriques captured a Spanish treasure fleet off Cuba’s Bay of Matanzas in 1628. The booty of gold and silver bullion amounted to a staggering 11,509,524 guilders, worth around $1 billion in today’s currency. It was the Dutch West Indies Company’s greatest heist in the Caribbean. Do you have any idea how long it would have taken Moses to make that money if he had become a doctor as his parents hoped? I calculated it – seven thousand three hundred and twenty seven years. Hence, his motivation to become a pirate.

The best-known, most charismatic and most influential of all Jewish pirates, the Kobe Bryant of pirates, was Jean Lafitte, the historical figure known for his key role in Andrew Jackson’s success at the Battle of New Orleans during the War of 1812. In the controversial Journal of Jean Lafitte, he claims that his mother's father was a Spanish Jew. During his life, he acted as a soldier, sailor, diplomat, merchant, and much more demonstrating natural gifts for leadership. Sources indicate that Lafitte was sharp and resourceful, but also handsome and friendly, enjoying drinking, gambling, and other extra curricular activities. He was known to adopt more aristocratic mannerisms and dress than most of his fellow privateers. He most likely would have been quite comfortable wearing Jerry Seinfeld’s “puffy shirt”. After the battle of New Orleans, Lafitte returned to pirating and eventually set up a pirate community on Galveston Island. Today, pirates still exist, and no doubt there are a few Jewish pirates as well, though they have trouble overcoming that obstacle on JDate.

The Haunted Smile
The 21st President of the United States: Failure or Inspiration?
Hiding Their Jewishness
The Jewish Pope: Following the Questions Home
Comments