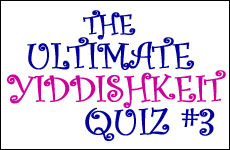 Are you a Jewish maven? Take the quiz and find out.

There’s “Who Wants to be A Millionaire?” the venerable “Jeopardy” (both a bissel hard) -- and yes, there’s still the syndicated “Deal or No Deal!” The very Jewish “Question” format is having a second heyday, even if the “question” is “Hey, shmegegge, can you count to 26?”

Jews are masters of the question, and sometimes even the answer.

As we Jews are masters of the question, and sometimes even the answer, I present you with: THE ULTIMATE YIDDISHKEIT QUIZ #3.

1. “Jared,” a JYA from New Jersey, met “Jessica,” outside a pub in London. Within five minutes they realized that Jessica’s aunt worked for a year at the Hackensack Library next to Jared’s mother and they each went to Camp Zion in the Adirondacks! What were Jared and Jessica most likely doing?

ANSWER: (b) Strictly speaking while “bageling” is fishing for MOT evidence, Jewish Geography is connecting, and not with Kevin Bacon, whose wife, by the way, Kyra Sedgwick (whose mother was Jewish), attended the Friends School and Sarah Lawrence shortly after my cousin. It’s been found through intense topographical study, that the average degree of separation among Jews is three, via camp, schools, or mutual mechutanim from Russia.

2. Many Jewish astronauts have brought symbols of their heritage with them into space, but only ONE can claim the honor of VOTING (by absentee ballot) from “up there!” Who was this “famous-firster?”

ANSWER: (a) In 1997, while at the Mir space station to study life sciences, David Wolf became the first American to cast a vote from outer space! (If it had been 2000, at least it would have made a re-count a snap. (Better Mir than Miami!) Astronaut Jeffrey Hoffman took the Torah aboard the Columbia.

3. Mama’s kvelling over Great Jewish Contributions to the World with your pals. Shayna –with-the-photographic-memory -- notices that six, Jonas Salk, Ira Gershwin, Paddy Chayevsky, Felix Frankfurter, Bernard Baruch, and Zero Mostel, have something in common, besides being MOTs and Nobel Laureates. So nu, what was it?

ANSWER: (b) Jewish immigrants revered education! Where they toiled in sweatshops, their kinder would one day own them! But in the early 20th century few greenhorns had the gelt, never mind much of a prayer of getting their geniuses into the “white bread” Ivy League. So what was a Jew to do? Go to CCNY! By 1903, more than 70% of its students were Jewish! This first tuition-free university in the U.S., known as “the Harvard of the proletariat.” became a bastion for scholars, Nobel Prize winners, and future world leaders.

4. You’re a top web designer who’s brought your boss millions in new business, so you ask for a raise, and he offers: “OK, I can go to maybe a 2 percent hike!” Which would be a proper Yiddish thought?

ANSWER: (b) "Good health to your belly button," is one sarcastic (and appropriate) response to this “thanks for nothing for a bupkes” offer! The first, (a) is a sincere "thanks.”

5. Your non Jewish neighbor is telling you a Jewish joke. Before he gets to the punch line, using your Yiddishe kop, you jump in. The joke:

ANSWER: (b) OK, both fit. But we Jews have a unique sense of humor steeped in hilarious irony. As, for many Jews (including the author), it’s quite normal to assume that a splinter in a toe could be an early warning sign, a reference to health is far more “yiddish.”

6. In 1952, The New York Times wasn’t telling the world to stop making a “Bubbe-Maiseh” in Korea, and Ozzie wasn’t warning his sons about eating “chazzerai.” Yet, in one media “bit” explorers asked the Ookabala-ponga natives, “Vos machst du?” (“How’re doing’?”). Where did this come from?

ANSWER: (a) Yes, it was a “Mad, Mad Yiddish!” The iconic mag, with its impressive stable of Jewish writers made hysterical, if not subversive use of Yiddish and Yinglish. In addition to sprinkling their pages “hoo-ha!” and “farshtunkener,” the above gem, in a strip by Harvey Kurtzman and Bill Evans titled “Ganefs” that spoofed “King Kong” (“Ping Pong”) appeared in the premier issue! A hit with junior America, MAD spread the Yiddish words!

7. You’re competing on “Iron Jewish Chefs,” a new not gourmet kosher cooking show on FRUM TV. The ganza macher host reveals the secret ingredient! You make a tsimmis! Producers slipped up by choosing which meat?

ANSWER: (a) Camel meat is not kosher. Although they chew their cuds, they do not possess cloven hooves. The American bison, however, both chews its cud and has fully split hooves! (Personally, I’d stick with the brisket!)

ANSWER: (a) Noah died 350 years after the Flood, at age 950, the last of the long-lived antediluvian Patriarchs. The max Biblical human lifespan diminishes rapidly thereafter, to the 120 years of Moses! (Pity!) Some Jews jokingly say “May you live until 121" to insure you won’t die suddenly!

9. Your grand-zayde was a census “taker” in 19th century New York City. The boss asked him to estimate the number of Jews in the City by coming up with a fast way to calculate. What did he do?

ANSWER (b): In the 19th century, the Jewish population of New York City was estimated by looking to the matzo! Our numbers were thought to be 40,000, using an average of five pounds a person. Of course, should some chazzers eat 10 pounds, the system was fershlugina!

Kosher in the News

A Chanukah Call to Action
It Takes A Lot Of Faith To Be An Atheist
How Instagram Brought Back This Nostalgic Soup
What Makes Eli Run?
Comments
MOST POPULAR IN Jewlarious
Our privacy policy