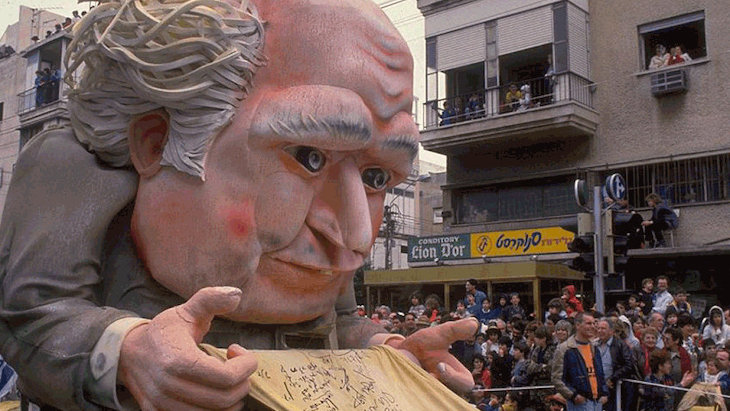 Here are some inventive ways Jews from around the world do away with Haman.

Smile! It’s Purim, which is the happiest, silliest, and yet serious Jewish celebration. We Jews kicked up a storm led by the courageous Queen Esther when we whooped the evil Haman and turned the day into one of joyful redemption – and joyful we get! We Jews are commanded to be so stuporously silly that we can’t tell the difference between “Blessed is Mordecai” and “Cursed is Haman.” (We also watch over Uncle Shmuel who, after “celebrating” can’t tell a Haman from a Hamentashen.)

We Jews read “The Megillah,” shake a “grogger” when (pooh pooh) Haman’s name is mentioned, wear costumes, imbibe on drink, and celebrate with carnivals. Of course it wouldn’t be Purim if We Jews didn’t make a “spiel” which are comic stories, plays, skits, and music acting out the tale – or even each other. Ah, but when we punk our nearest and dearest is it fake or real? Truth or fun? Do we know? Do we want to know? All of which is part of the magic that is Purim.

What happens when Jews of all backgrounds are not only allowed, but expected to let loose? Let’s look at some interesting world customs now and then. Most involve “inventive” ways to do away with Haman – and triumph over evil.

U.S.A.: From “ A Wild West Purim,” with ropes a-spinnin,’ whips a-crackin’ and a rousing “Yee Haw” at the mention of Haman’s name, to Wizard of ODD spiels, to Megillah blastoffs and moon-tashen in “Outer Space” many shuls and organizations plan rip-roaring events in keeping with the Purim spirit of courage and adventure.

Italy: The throwing of the nuts has been a popular custom. The throwees? Two teams of children while their parents holding cypress branches would ride the streets on horseback. As for Haman, his rotten effigy was placed on high, as all would circle it and bleat trumpets in triumph.

Persia: A macher in the congregation would provide a massive feast for his community. The merriment would be accompanied by the celebrants yelling “May the memory of Amalek be erased!” to a huge and mocking effigy of Haman prepared by the children then hung on a stick in the courtyard which was set on ablaze. Following the tradition of Talmudic times, once the fire died down youngsters would leap over the coals. All this leaping worked up an appetite, as the congregation would go back to gleefully gorging.

Germany: Gunpowder in torches were lit the night before Purim that exploded with such force during the reading of the Megillah, the congregants met up at Miracle Ear. In one German town, two candles “Haman” and “Zeresh” were lit and let burn down, symbolizing the fate of the enemies of Israel. Among the goodies? Cake-shaped “Haman” dolls were gobbled with relish by children.

Tunisia: Doomed Hamans were everywhere as children made effigies out of paper, straw, and rags. The people of the village would gather round the school as a large bonfire was lit. The little ones would then toss their models into the fire, beating the effigies with sticks made especially for this Purim tradition. With all Hamans now ash, sulfur and salt were added as the group yelled the traditional “Long Live Mordechai, cursed be Haman, blessed by Esther, cursed be Zeresh.”

Egypt: Congregants would hold candles during the Megillah, while beggars would hold their hands out for a little something more. Virtually all pay these gratuities --“Baksheesh”-- (although in English, the “sheesh” part may taint the tzedakah part a little). At one time, young men, in keeping with the verse "and they brought him on horseback through the streets of the city" would ride around on camels and asses, dressed in costume often dyed in stripes.

In Bukhara (Uzbekistan): What do you do when you live in snow during Purim? You build a “Haman-man.” To differentiate between evil and a jolly snowperson, Haman-man had a head like an elephant, fat legs, a beetroot mouth below a cracked pot hat. Around his belly, strung watermelon seeds meant “Bigshot.” After eating, it was bye-bye Haman as the congregants, using lit wood and rags – melted him.

Yemen: Creativity was not lost on Yemenites as children from olden times did a “Dracula” on Haman, using sticks, length and cross wise yelling: "Haman the wicked." In some areas, the children pulled a ridiculously decked out Haman scarecrow in a wooden cart admonishing “thus shall be done to the wicked Haman." Needless to say Scarecrow Haman met with fiery end.

Wherever you find yourself this Purim and whatever you do, just make sure it’s a happy one!

Confessions of a Laugh Addict
In the Shadow of David and Goliath
Where Do the Laws of Nature Come From?
Saadiah Gaon, Rashi and Maimonides: How Three Rabbis Revolutionized Judaism
Comments