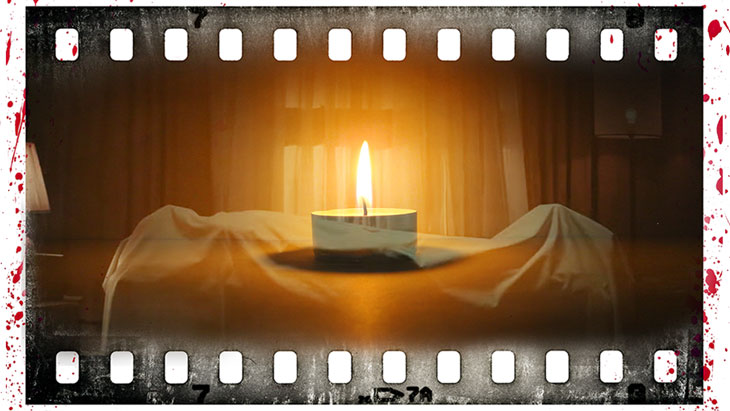 Who knew that Judaism could scare the bejeebers out of you? The movie The Vigil shows it can. This unnerving film is frightening and thought provoking, and has a surprisingly authentic feel true to observant Judaism. And a good chunk of the dialogue is in Yiddish.

Spoilers ahead. The setting: a young man in Brooklyn suffered a severe tragedy from anti-Semites while he was living as a traditional Hassidic Jew. He has since left observance, yet his old rabbi still reaches out to him. The rabbi asks him if he'd accept a job offer for one night be a shomer, to sit vigil over a recently deceased old man, (it is the traditional custom not to leave the deceased alone until burial). The deceased is possessed by a demon called in Hebrew a “mazzik”, that haunts the old man due to his own trauma that he suffered during the Holocaust. The demon apparently seeks to switch from housing the deceased to haunting and housing the young man.

While the surreal illusions that make the young man feel as if he’s losing his mind are not part of Jewish tradition, the basics of the story and its depiction of negative spiritual forces are derived from Jewish sources.

Let's unpack some of salient Jewish points from the film.

The passage from one realm to another for the soul is very intense for all who know the person. And despite the fact that the soul leaves the body, Jewish tradition states that the soul hovers near the body until burial. So while the body may lie cold on the table, there’s still an eerie feeling near the body. We treat the body with utmost respect since it housed the soul of our loved one.

The Chevra Kadisha – the “holy group” – is the special group of people designated to handle all the aspects of the burial. One of the mitzvot performed is to stay in close proximity to the body until burial. There are three reasons associated with this: out of respect, to keep the body physically safe i.e. scare away mice etc., and to protect from negative spiritual forces that may want to harm the person.

The Hebrew word used in the movie is “mazzik” which means “damager” and is understood traditionally to mean there are harmful forces at work. They aren’t expected to do frightening mind-warping things like in The Vigil, but they may harm a person in a variety of ways, cause blindness, muteness, make your dishes fall out of the cabinet for no reason, etc.

Other words used to refer to “evil” forces are ruach ra – a “bad spirit”, sheidim – “demons”, dybbuk – “clinger”, and ayin hara – the “evil eye”. The “mazzik” in the film seems to be acting like a dybbuk, a harmful spirit that attaches itself to a person.

Why do demons exist?

In the Torah itself, we find a reference to demons: "They shall no longer slaughter their offerings to the demons after whom they stray…" (Leviticus 17:7), and Rashi notes this is referring to sheidim, demons. Nachmanides, the great Spanish commentator, discusses the need to avoid worshipping demons and the importance of realizing that everything comes from God. Any suffering, even from a mazzik, has a divine purpose and our job is to try to figure the message. Why did God allow me to be plagued by this mazzik?

The mazzik is in some ways a manifestation of their guilt and pain, and is forcing them to confront their trauma.

In fact, The Vigil takes this route. The victims in the film suffered trauma and tragedy, and they are weighed down by guilt and pain. The movie suggests that the mazzik is in some ways a manifestation of their guilt and pain, and is forcing them to confront their trauma. The themes of anti-Semitism, guilt, and tragedy are woven well together in the movie, and some thoughts are left up to the viewer.

Where are all these demons now?

If the Jewish tradition is replete with issues about various types of demons, how and when they do damage, and how to protect ourselves, why is it that Judaism seems divorced of all this demonology these days?

There are a number of historical events that put a damper on all these demonic shenanigans. For example, a particular sage named Abaye, fourth generation Talmudic sage in Babylonia, cast out demons from populated areas. Possibly sensing that people couldn’t handle the damages done by them, he removed them from us in general. This doesn’t mean they don’t exist at all, merely that they are no longer a constant threat. However, certain times and places are still prone to various negative spiritual forces, for example, a cadaver awaiting burial. And therefore, the particular custom to guard the body still exists today.

If you are ever in a position to do such a holy and honorable mitzvah, realize that you are doing something special and therefore you have special spiritual protection. Your presence is a good deed. Nothing crazy is going to happen.

One word of caution: these forces are apparently uninterested in the limelight. They prefer that you don’t look for them or talk about them. And there is a prevalent custom not to even mention their name.

So how did all involved in making this movie avoid some type of harm from real mazzikim? Maybe because they adhered to a respectful authentic view of traditional Judaism. Maybe because, as I’ve read, they didn’t shoot the film on the Sabbath, and they provided kosher food for the actors. The house they used for the set was an actual house, and it seems had actual mezuzahs on the doors. (A mezuzah is known to be a type of protection from harm.)

The climactic encounter with the mazzik really struck me. The protagonist dons tefillin – phylacteries and while the custom is not to wear tefillin at night, nonetheless tefillin are associated with spiritual protection from evil. He also yells out Judaism's central prayer, The Shema – “Hear O Israel, the Lord our God, the Lord is One!” This is the calling card of the Jewish people, the essence of what we believe in and stand for. It is said in the morning and in the evening, it is said by many before morning prayers, and before going to bed. And it is said on one’s deathbed before dying. It is also said at times when more protection is needed from spiritual harm.

The Shema, the declaration of one God, is what finally vanquishes the demon.

Spoiler alert: In the movie this prayer, the declaration of one God, is what finally vanquishes the demon. And in a way, the belief in a demon, and the power it has to do harm on its own, is a type of idolatry, as the person is ascribing power to an entity other than God. When you focus strongly on God, and that nothing can happen without His involvement, it can be the key to being released from the burden of the illusion that this other entity has its own power. So the movie is expressing an idea that is very powerful, and is consistent with Jewish philosophy.

You may not be able to avoid some potentially harmful situations in life, you may or may not be aware of what potentially could harm you. You may not have other protections available. But you always have the central prayer of the Shema. Keep it in your mind, on your lips, and in your heart, and you will have some protection from any harm that may be there.