Looking at the Horror 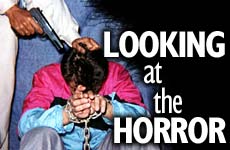 Aish.com mourns the barbaric murder of Nick Berg. His brutal decapitation raises similar issues that this article addresses, issues that we hoped to never have to reconsider.

June 13, 2002 -- The video of Daniel Pearl's beheading is searing and nightmarish, but the key to its power is not that it shows him dead. It is that it shows him alive. You look into his eyes, you hear his voice, you all but smell his fear as he tells the camera what his captors are forcing him to say.

"My name is Daniel Pearl. I'm a Jewish American from... Encino, California, USA. I come from, on my father's side, a family of Zionists. My father is Jewish. My mother is Jewish. I'm Jewish. My family follows Judaism. We've made numerous family visits to Israel..."

The three-minute video is a piece of Islamist pornography: A frightened Jew -- even better, a frightened American Jew -- confesses his Jewish roots and denounces US foreign policy. Then his head is cut off and brandished triumphantly as English words scroll up the screen: "And if our demands are not met, this scene shall be repeated again and again."

The video has been posted for weeks on a number of obscure Internet sites. It is reportedly a great hit in Saudi Arabia, the country that has supplied tens of thousands of recruits and vast financial subsidies to the cause of Islamist jihad. Last month, CBS aired a brief portion of the video -- though not its grisly ending -- "so that you can see and judge for yourself," as Dan Rather put it, "the kind of propaganda terrorists are using in their war against the United States."

But it only became available to the general American public last week, when The Boston Phoenix, a weekly newspaper, supplied a link to the video on its home page and published a photograph of Pearl's severed head. A media firestorm ensued, with critics accusing the Phoenix of sensationalism, poor journalistic judgment, and insensitivity to Daniel Pearl's family.

"We all know what the facts were," Mortimer Zuckerman, the editor-in-chief of US News and World Report, said during a CNN interview. "The Pearl family is going to be having to live with this once again in the most gruesome ways, and I don't think it is going to add much to our understanding of the story."

This video does something for Daniel Pearl that has been done for virtually none of Al Qaeda's other victims: It makes him real.

The family said nothing last week, but at the time of the CBS broadcast, Mariane Pearl condemned the "heartless decision to air this despicable video." It was unspeakable, she said, "that any mother, wife, father, or sister should have to relive this horrific tragedy and watch their loved one being repeatedly terrorized."

Who cannot understand her fury and anguish? Whose heart doesn't go out to the devastated young widow, whose infant son will never know his father?

And yet this video, depraved and evil as it is, does something for Daniel Pearl that has been done for virtually none of Al Qaeda's other victims: It makes him real. It allows him to be seen as a flesh-and-blood human being, a guy with a face and a voice and a house in Encino. Countless Americans who never knew him in life will experience Pearl's death as a sickening kick in the gut. His murder is an atrocity they will take personally -- because they will have seen it with their own eyes.

Islamist terrorists butchered more than 3,000 innocent men, women, and children last Sept. 11. And before them there had been more than a thousand other victims -- in the Marine barracks in Beirut, on Pan Am 103, in the first World Trade Center attack in 1993, at the Khobar Towers barracks, in the embassies in Kenya and Tanzania, on board the USS Cole. Yet who, their families and friends excepted, knows what any of them looked like? Who remembers any of their names?

The Pearl family's ire is understandable. But I wonder if it isn't the loved ones of all the other victims who have the better reason to be angry.

This is no time to be covering our eyes.

In a note on the Boston Phoenix web site, the paper's publisher calls the Pearl video "the single most gruesome, horrible, despicable, and horrifying thing I've ever seen." Is it, though? Is it more horrible than the photographs from Babi Yar -- the naked Jewish women, some with infants in their arms, lined up at the edge of the pit and then machine-gunned by the Nazis? Is it more gruesome than the worst lynching pictures, which show the victims not only hanged, but mutilated and burned as well? More despicable than the footage of dead American soldiers, dragged by their necks through the streets of Mogadishu?

There are times when no good purpose is served by publicizing a terrible image. The repeated broadcast of race car driver Dale Earnhardt's fatal crash last year was gratuitous. Nothing was gained by replaying, over and over, the beating of Rodney King.

But the beheading of Daniel Pearl is different. It conveys with a force no words can match the undiluted malignancy, the sheer evil, of the enemy we are fighting. Yes, it is a horror. Yes, it is barbaric. But we are at war with barbarians, and what they did to Pearl, they would gladly do to any one of us. This is no time to be covering our eyes.

Views expressed by the author do not necessarily reflect those of Aish.com

Tell us what you think in the comments section below.

Me and the Burkini Debate

After Malaysia Bans Israeli Athletes, Committee Does the Right Thing

Your Computer's Yom Kippur Message
Adam and Eve Were Vegan
Bechukotai 5782: Divine Retribution
Behar 5782: Working to Live or Living to Work?
Comments
MOST POPULAR IN Society
Our privacy policy