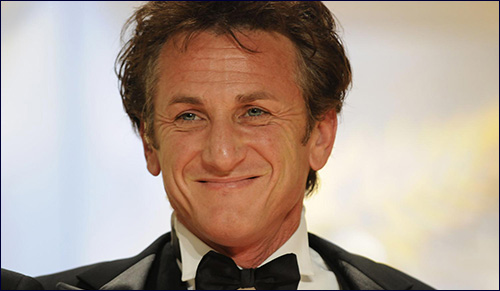 It reads like a James Bond film. It was recently released that Shmuley Boteach’s organization, This World: The Values Network, will award Sean Penn a 'global champion of Jewish values' honor for his work in releasing Jacob Ostreicher, 54, a New York Orthodox Jewish entrepreneur in a flooring firm in Brooklyn, from captivity in Bolivia. Several years ago after investing in a rice-farming venture in Bolivia, Ostreicher was arrested for money laundering in December 2011 and held in prison under brutal conditions, accused, but not charged. He alleged that the Colombian woman running the business had been skimming the investors’ cash.

Ostreicher spent 18 months in Bolivia’s infamous Palmasola squalid prison where he was beaten, humiliated, and had to pay off his jailors. At his request, along with other organizations, Sean Penn stepped in, arranged for house arrest, then under murky conditions, Ostreicher was spirited out of the country back to America. The general assumption has been that Penn was intimately and personally involved.

In 2010, Penn managed to speak directly with the President Evo Morales to gain the Orthodox Ostreicher’s house arrest. What followed resembled Mission Impossible. Somehow Ostreicher made it across a hostile border into the United States. According to Peter Hakim, president emeritus of the Inter-American Dialogue in Washington, "You'll never find out [the truth]."

While the Rabbi Boteach admits he has “disagreed vehemently with Penn in the past on a range of issues,” he adds what Penn did “blew my mind, and, in the spirit of gratitude, I must acknowledge it.” Rabbi Boteach adds: “Penn had no obligation to risk his life for Ostreicher. I’d like to think he was moved by the simplest of reasons – to save another human being in need.”

Penn will be given the organization’s 2014 ‘Champion of Jewish Justice’ award at a gala on Lag B’Omer, May 18, in New York. Rabbi Boteach told The Algemeiner, “The essence of this award, is that you don’t have to agree with someone’s politics to honor his tremendous humanity.” He then talked of Penn’s unbridled and unparalleled help in Haiti after the 2010 earthquake. Penn moved to Haiti after the devastation where he created a relief organization that assisted 60,000 displaced persons.

There are other unsung heroes who don’t necessarily make “copy” and have nothing on their mantel but dust. Here is just a tiny sample during 2013.

Last March, three brothers from the Bedouin village Kuseife swept to sea by strong currents during their family’s visit to Ashkelon. After four days of rescue efforts the third brother’s body, Nahed Sariye was discovered. But more, a story of heroism followed. Two other brothers from the Sariye family had been saved by Yaakov Bruchim, a 22-year-old from Ashkelon. Bruchim was walking home after shul when he saw the brothers drowning, jumped into the water and pulled one of the brothers, Salaam, 22, to shore. He then again went back and pulled the other brother, Salman, 19, out as well. Hassan Sariye, the emotional father of the boys, said about Bruchim. “God took away three sons but gave us another.” The modest Bruchim explained that he “didn’t do anything, but if I could have done more, I would have.”

Passengers on Bus Near Tel Aviv Flee Just Before a Bomb Explodes:

In December a bomb exploded on a bus in Bat Yam near Tel Aviv literally minutes after the passengers were asked to get off. Initial evidence pointed to terrorism. The bus driver, Michael Yoger, said that one of the passengers had alerted him to a bag on a seat. Inside were wires. Yoger ordered the passengers to leave the bus. Ten minutes later there was an explosion. No one was hurt. President Shimon Peres thanked the bus driver, telling him, “The whole nation is saying prayers of thanks today; you saved so many lives with the speed and bravery of your actions.”

Last October marked 70 years since the revolt at the infamous Sobibor death camp. After decades of near oblivion, Alexander Pechersky, who played a major role in masterminding the revolt and rousing his fellow prisoners was not only ignored, but persecuted during the Stalin anti-Semitic campaign. In 2013, he was posthumously given a Hero of Russia award, the country's highest honor.

In a documentary about heroes directed by Yoav Shamir he looks at a New York City “subway hero” who rescued a man who fell onto the subway tracks after having a seizure; a Gentile woman who risked her life by hiding Jews during the Holocaust; his grandmother, widowed twice, who died heroically; a neurological researcher who amassed a fortune and gave away almost all his money, and Yonatan Shapira, an Israeli peace activist; and others.

Rich or poor, famous or not, each and every one of us can make the commitment to give and help others, and become a true hero.

He Knows if You've Been Naughty or Nice
Don’t Believe in Other Gods Versus God is One
Seeing Without Eyes
Why Shouldn’t We Eat Whatever We Want?
Comments
MOST POPULAR IN Jewlarious
Our privacy policy
Aish.com Is Looking for Great Writers