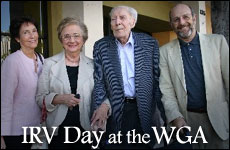 "I guess I'm the last of the MGM roundtable of screenwriters...and I hope I get through this interview." Irv Brecher

You would've loved it. Better, you would've laughed it: my 93 year-old writing partner, Irving Brecher onstage doing 70 minutes of standup the other day. Not just any day, this was "Living Legends: Three Classic Films and Their Writers" day all-day at the Writer's Guild theater in Beverly Hills. How many chances do you get to see Meet Me In St. Louis (1945) on the big screen and the writer of the picture in the house still holding the house wowing old and young with stories of Judy Garland, MGM, and his pals, the greatest Jewish comedians of the 20th century?

After writing At the Circus and Go West for the Marx Brothers (on his own; they usually had platoons of gagsters), vaudeville and radio shows for Milton Berle, Brecher became "scenarist" for seven musicals at MGM. "More stars than there are in heaven" -- that's what they said about Metro, home of Hepburn, Tracy, Garbo, the Barrymores and Brecher's favorite Brothers.

Meet Me in St. Louis began as stories in the New Yorker by Sally Benson, and in 1943, with only one Technicolor camera around because the rest had "gone to war!" Producer Arthur Freed of the famous Freed Unit told studio writer Irving Brecher (brought to MGM by Mervyn Leroy in 1937 -- Irv did "punch up" work writing lines for a scarecrow, woodsman and lion in a certain Oz pic), they hadda shoot something. What they got with that camera created dreamy fantasies that still glow in the memories of moviegoers like no other combo of shadow and light -- no wonder they called those days "the Golden Age" of Hollywood.

So after they show Meet Me, during the applause here comes Irving Brecher, all 110 pounds of him, slowed by walking pneumonia and recent pacemaker surgery, slow-rolling his walker (an Invacare 3000 -- his "Rolls" as his wife Norma calls it) down the theater aisle and helped up two steps to the stage by moderator Robert Freedman, writer/director of, among other movies, a Judy Garland mini-series starring Judy Davis.

Freedman finds out that Irv -- who knew? -- actually had to convince Judy Garland to do the picture in the first place. She'd turned down doing "Esther," afraid little "Tootie" (Maureen O'Brien) would steal the picture. So the M in MGM, Louis B. Mayer called Irv in and ordered him to take Judy off into one of Mayer's side suites to read the entire script to her.

"Judy," Irv began after L.B. locked the door. "I think you should play the part, but I'm not going to beg you to play it. It's not my business to do that. But I'll read it to you and I think you might agree. I hope you will."

Brecher says he could tell she was scared, so he sat down to read to her, calmly as he could. "Except for one thing," Irv tells an audience now rapt as they'd been under the influence of the Technicolor. "The way I read it was terrible. Terribly deceitful. When I got to Margaret O'Brien's lines as the child Tootie, I kind of threw them away like they weren't there. You could barely hear them, they were in the sewer, or I mumbled like it was nothing. At the same time, in every scene, I emphasized everything Judy was saying. Everything I read was the greatest line she ever heard. I acted them out. I paused in the right places. I laid them on. And at the end, after I read the entire script, she said, 'I don't know what to do,' so I said, 'Judy, I'll tell you what to do. Decide what you're going to do after you make the movie.' So she laughed and went in and told Mayer she would do it and, well, of course it became the biggest picture she ever did."

Blind from glaucoma since 2001, Brecher comes off sharp as his blue suit; this wispy-white-haired gentlemen, crossing what have to be the skinniest ankles in Beverly Hills, seems like one of those Ceylonese elephants holding all native memory in its watery blue eyes. He recalls not just the film legends from the 40s onwards but also their phone numbers. 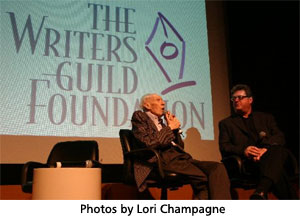 At one point, not realizing the interviewee chair had been shifting ever so slowly, Brecher swiveled completely around during his tellings to where he was facing the other way. The back of his head became a shadow on the gigantic "WRITERS GUILD FOUNDATION" backdrop slide, but as the moderator Freedman (barely got a word in) swiveled him back around to face front, Brecher retorted with magical timing mid-yarn: "What happened? I thought the audience left."

In between, Brecher entertained us with tales about an Astaire musical he wrote for Minnelli at MGM (Yolanda and the Thief; "A flop here, but in Europe it became a cult favorite").

Brecher moved on to make movies with Ernie Kovacs, cast Jackie Gleason in television's first situation comedy, "The Life of Riley" (1949, a few years before "The Honeymooners"), and told us how he fell for Ann-Margret when he wrote Bye Bye Birdie. Did I mention he once got into trouble with Milton Berle in Buffalo, dressed up like a Canadian Mountie to ride horseback with Jack Benny, and told us what it was like fishing with Groucho, getting thrown out of hotels by anti-Semitic concierges with Groucho, and crawling out of a hotel window in Wyoming with Groucho so they wouldn't be beaten up by gun-toting cowboys?

Closing with a warm memory of President Clinton showing Meet Me in St. Louis in the White House, Brecher rolled even more slowly back up the aisle, followed by a line of fans throwing questions (Well, they couldn't get past him could they?). He'd spoken at such length there had been time for only one from the audience: "Who makes you laugh?" to which he answered ever up-to-date, "Larry David. And Woody Allen; his first pictures have to be considered classics."

Finally reaching the lobby, he sat for another hour taking questions and photos and kibitzing with Fay Kanin and fans.

The next day brought his daughter's memorial. Irv's beloved Joanna passed away at 66 one month earlier. Giving thanks and blessings to a house full of her friends Sunday afternoon in Pacific Palisades, he leaves them crying this time.

"How do you do it?" I asked him, amazed at the heroics of a nearly ninety-four year old fellow who could pull off this feat over a weekend. Was this just a person facing his problems? A true professional in the business of life?

"I was made this way," answered Brecher in between bites of half-a-brisket sandwich he shared at Labels Table, his favorite hole-in-the-wall deli on Pico near Beverly. We went there on Monday with Norma and his niece Nancy down from San Anselmo. "I can't do it any other way."

"There's a challenge in facing an audience," he then continued, "that I find scary until I get started. And then I seem very comfortable when they're laughing. That was funny when I turned away from the audience. I had no idea. He swiveled me back around. Robert Freedman. He was very good." Then Brecher added: "'Living Legends.' Well, it's a much better idea than their original title: 'Resuscitated Relics.'"

To learn more about Brecher's upcoming memoir go to www.benyehudapress.com

Did You Know They’re Jewish?
Don’t Believe in Other Gods Versus God is One
Seeing Without Eyes
Why Shouldn’t We Eat Whatever We Want?
Comments
MOST POPULAR IN Jewlarious
Our privacy policy
Aish.com Is Looking for Great Writers