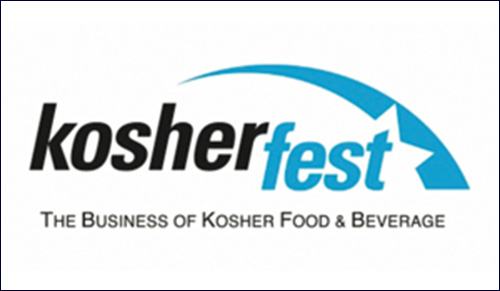 A picture perfect tour of the recent kosher food trade show at the Meadowlands in New Jersey.

As part of my work at a kosher certification agency (COR – The Kosher Council), I was fortunate enough to attend last week’s “Kosherfest” food festival. For those who don’t know, Kosherfest is the world’s largest kosher certified trade show where attendees are able to peruse, and yes, sample, the newest trends in the 12 billion dollar kosher food industry. Kosher isn’t bubbie’s gefilte fish and chicken soup anymore. Kosher is cutting edge and it’s big business. And the people who are walking the aisles at Kosherfest mean business too. If you’re planning to attend, you better bring full body armour because these people are hungry! They don’t call Kosherfest the “world’s biggest Kiddush” for nothing.

They don’t call Kosherfest the “world’s biggest Kiddush” for nothing.

For those of you who weren’t lucky enough to attend Kosherfest, I’m sorry. Aside from 12 pounds, I also gained an appreciation for the diversity and ingenuity of the Jewish people and I want to share this experience with you. So ladies and gentlemen, I present you with the sights and sounds of Kosherfest 2013 (full disclosure: there will be no sounds):

Upon entering the Kosherfest, this is what you see: 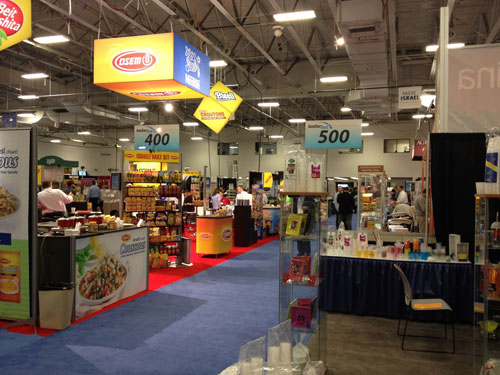 At first glance, nothing too out of the ordinary. Looks like a standard food show. But then as you walk in you are met with this sign: 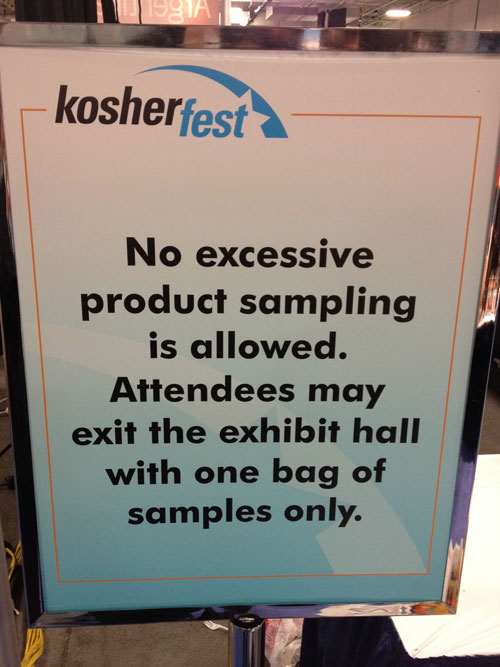 This being a kosher trade show, there was of course the standard kosher fare. There were pickles for example: 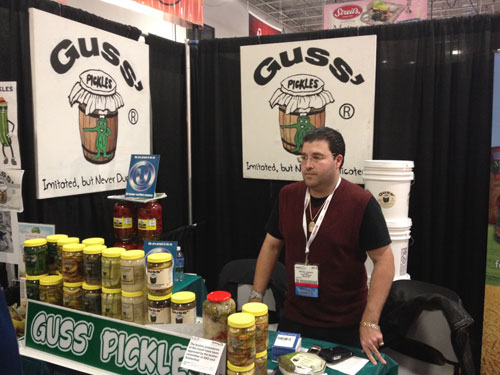 And here’s a gentleman who appears to be seriously enjoying one of Guss’s pickles: 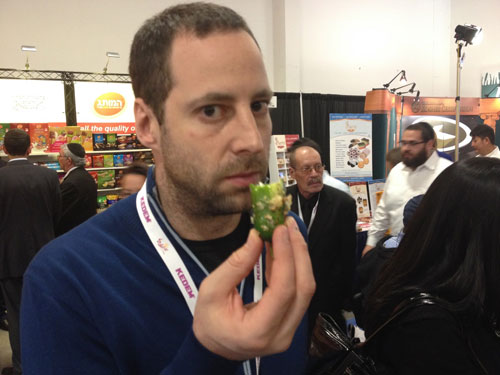 And of course there’s gefilte fish: 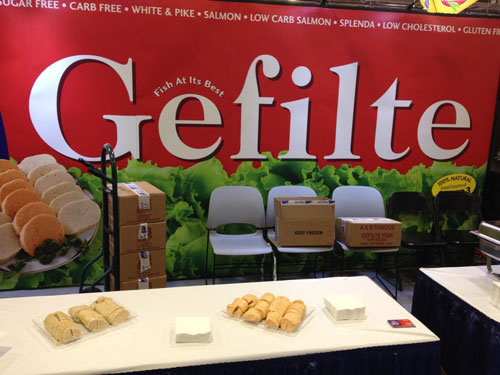 And of course you can’t have a kosher food show without a nice piece of brisket: 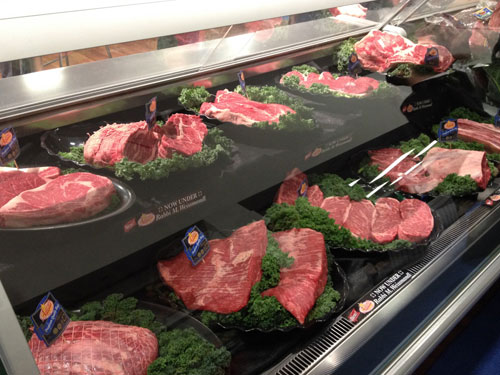 Remember, if you’re going to sample some brisket, you better do it after visiting a booth like this one: 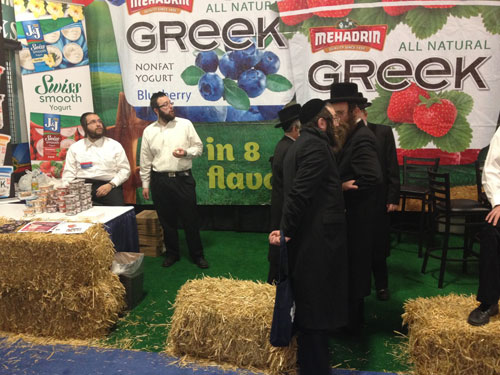 So the standard kosher fare they’ve got. But Kosherfest has kosher products you wouldn’t have seen only a few years ago. For example, my personal favorite were these: 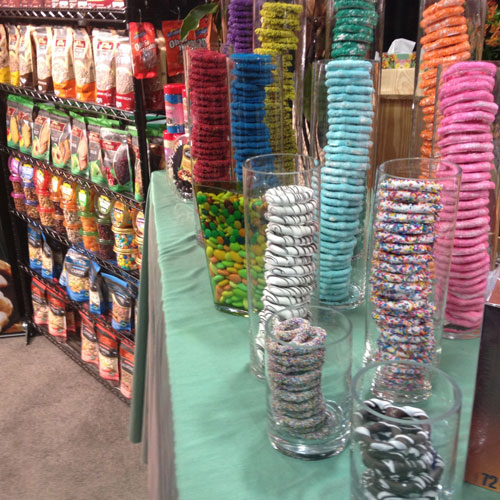 Please note: my apologies to the manufacturer of these chocolate covered pretzels. I may have violated the “excessive sampling” regulations in your booth.

Remember when kosher wine used to taste like cough syrup? Well not anymore: 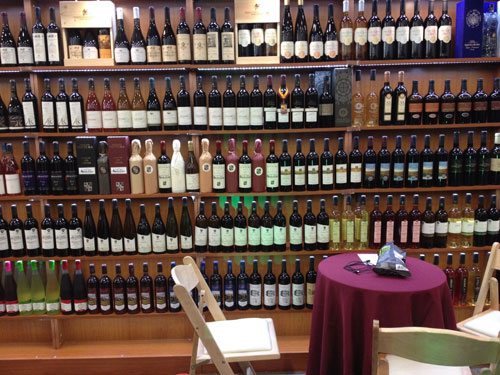 You may want to pick up a few bottles of these for your next Pessach seder. But be sure to have some grape juice on hand as well. You know how Uncle Irv gets after a few glasses of wine. Awkward!

And if you’re looking for something innovative check this out: 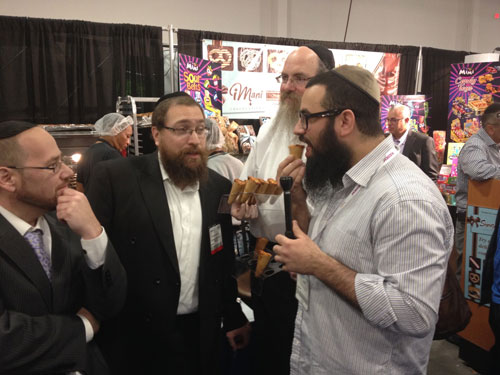 Speaking of blurring the line between main course and dessert, take a look at this picture: 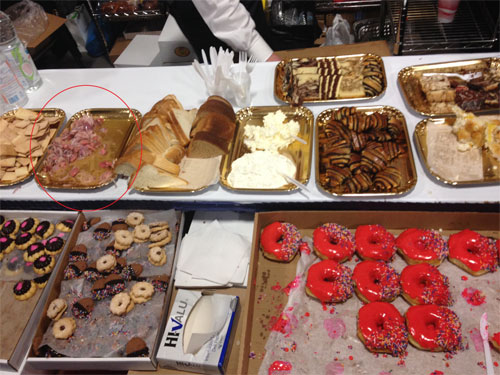 Don’t see anything unusual about this dessert display? Look again. We’ve got donuts and rugelach and cookies, and then in that little red circle, you see that? That’s herring – that famous Jewish dessert. I would like to note, that the herring seems to be going faster than the donuts. What is it with the Jewish people and our love with that salty slippery snack?

Not a fan of fish? Not to worry, Kosherfest has chicken too: 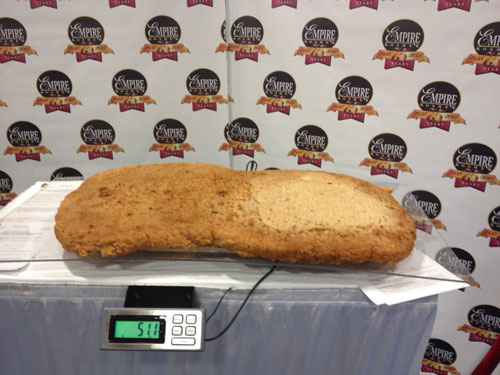 In case you were wondering, this is the world’s largest chicken nugget, weighing in at 51.1 pounds. This is equivalent to the total amount of weight gained by the Rosenberg family at Kosherfest.

Another great thing about Kosherfest, is that you get to see some famous people. That’s right, here’s Jewlarious’s own Mordechai Schmutter: 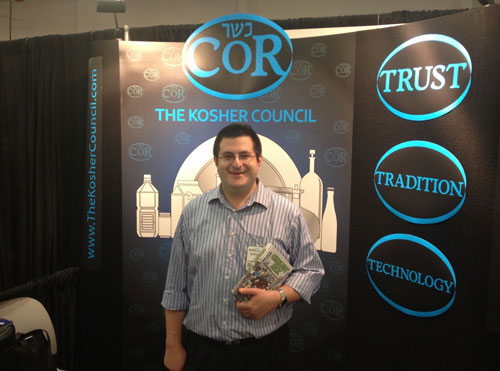 Speaking of famous people, this guy was also at Kosherfest: 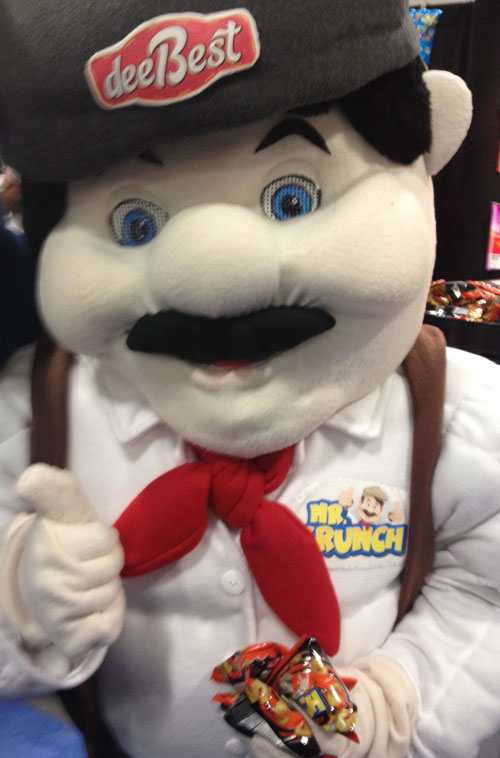 Not sure why Super Mario was handing out bags of potato chips. I guess life’s been tough for a washed up 80s videogame character.

When I got home from Kosherfest, my wife asked me what the best part of the show was. I told her that there were two. And believe it or not, neither of them were food related.

The first was this: 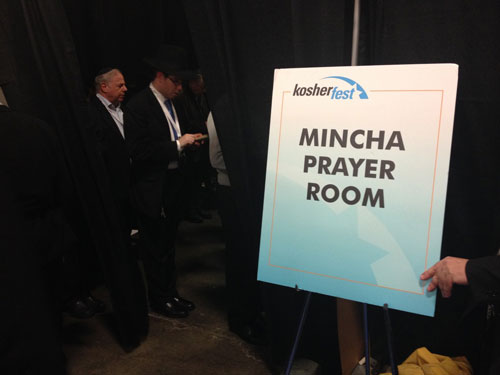 Despite the fact that everyone at Koshefest is working, taking care of their material well being, people still take time out to focus on their spiritual well being.

Second, Kosherfest brings together Jews of all stripes. It doesn’t matter if they are rabbis or regular Joes, Kosherfest gives us a reason to focus on something we Jews have in common, food: 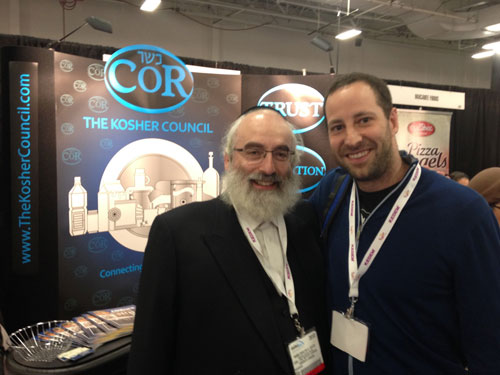 And yes if you are wondering, standing next to the rabbi is the same guy who was seriously enjoying Guss’s kosher pickles.

Six Degrees of Eddie Brill
Don’t Believe in Other Gods Versus God is One
Seeing Without Eyes
Why Shouldn’t We Eat Whatever We Want?
Comments
MOST POPULAR IN Jewlarious
Our privacy policy
Aish.com Is Looking for Great Writers