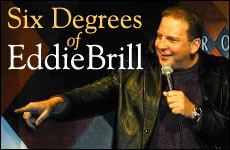 According to the warm up comedian for David Letterman, comedians are the truth tellers of the world.

Eddie Brill is the Kevin Bacon of the comedy world. The 49-year-old entertainer, who warms up the audience and works as Talent Coordinator for comedians on Late Show with David Letterman, is the man to know in the humor-sphere. Aside from his connections at Letterman (where he's also performed eight times), Brill's half hour Comedy Central Presents special is a favorite on the network's rotation, he teaches comedy workshops from the United States to Canada to England, and he serves as Humor Consultant for Reader's Digest. His friendships with comedians such as Sarah Silverman, Louis C.K., Mark Maron, and Dave Attell ensure that he is no more than six degrees from any name in comedy.

Brill's fixture as a staple of American humor allows him to stay abreast of comedic advancements. "Seventy five percent of people are sitting at home playing on the Internet, watching clips all two and a half to three minutes long," Brill says. "There's a starvation right now for content." His current project, creating online content for the Internet in conjunction with Gotham Comedy Club, is poised to lure people away from thinking of television as the place for quality stand up.

"The internet is where the world is going," he says. And Eddie Brill is going there, too.

As with many comedians, Brill's comedy story started in tragedy. His stepfather's death at a young age caused Brill, then a junior in high school, to examine the finality of life and how to deal with it. He put off plans to study math and science at MIT in pursuit of a more creative endeavor. An interest in radio and broadcast journalism led to enrollment at Emerson College in Boston, where Brill "met Denis Leary and Stephen Wright and a bunch of other very funny people. We formed a comedy group and it was very successful. All of a sudden I was in comedy."

Fortunately, his upbringing provided plenty of material for his new passion. Brill grew up a nice Jewish boy in Brooklyn listening to comics like George Carlin, Buddy Hackett, Don Rickles, Rodney Dangerfield, Jonathan Winters, and Jackie Vernon. He even attended an Orthodox Hebrew School which began to highlight the tension between the Jewish world, and the world around him.

Such tensions are part of many comedians' make-up. "Jewish people and Black people are some of the best comics on the planet," Brill declares, listing Woody Allen, Richard Pryor, and Chris Rock as withstanding performers. He attributes the success to a battle against oppression. "And how do you fight out of it?" he asks. "By being funny."

"How do you battle against oppression? By being funny."

Brill's own struggle fuels his comedy. He often talks about religion on stage and isn't afraid to offend listeners. Jesus, he finds, always makes a provocative subject: "People think of him as a white guy but there's no way. Jesus was a Middle Eastern, dark-skinned Jew. Everyone was. And I say he wasn't born in Bethlehem, Pennsylvania – he was born in the Middle East. He would have stood out like a sore thumb if he [were] a white guy." Brill shrugs off any audience aversion with the reassurance that it is not his job to placate listeners. He's out there to tell his opinion in a funny way and make the audience think.

It is that freedom that attracts him to comedy. In most jobs, Brill feels people can't be truthful. He gives as an example the four years after college he worked as an advertising agency copywriter, when he was paid to lie to consumers. Comedians, he says, are the truth-tellers of the world, people who are not only able but expected to expose the underbelly of honesty in a humorous, captivating way. "Once you get a laugh from telling the truth," Brill reveals, "you can never stop."

And truth, he finds, is universal. As such, he doesn't adapt his act to particular audiences. "You should write your routine as a human being," he suggests. "I think that just by being a human being, people will laugh." While Brill feels that tailoring material pigeonholes a comedian, he does concede that snippets of viewer-specific material can be infused into a routine. "If there's a Jewish audience," he gives as an example, "you can make little Jewish jokes." The act of comedy, though, trumps diversity.

His formula works well. Brill, who is based out of Manhattan, performs nationally at famed venues like Caroline's on Broadway and Radio City Music Hall as well as internationally in locations as varied as Ireland, Amsterdam, and Australia. He has appeared in nine movies including 30 Years to Life (with Tracy Morgan) and Dead Horse and lent his voice to the animated series' Dr. Katz and Science Court.

But it wasn't always easy. Brill's connections from Emerson helped him transition from copywriting to full-time comedian – a classmate who worked at the restaurant portion of the West Village's Paper Moon Club remembered him from the comedy group and asked if he would do a comedy night and set up shows. Brill had his first gig there on a Sunday in 1984, booking and hosting it into a successful weekend room where comics from all over the world won over New York.

Brill's debut as an audience warm-up comedian also came from college networking. A peer who worked for Saved by the Bell heard of the opening and suggested him for the position. Though he ultimately got fired for dressing down an 11-year-old heckler whose antics annoyed the viewers and disrupted his show ("I actually saved the audience by doing what I did," he maintains), other warm up opportunities followed: The Dana Carvey Show, Madigan Men, This is Your Life. And then, of course, Letterman.

Brill's ability – and eagerness – to mentor young and seasoned comics as they take their talent to the next level helps expand his role on the world's stage. This is particularly true of the new talent he brings to late night television such as Roy Wood, Jr., Jeff Caldwell, and Pete Correale. "It was my dream to do the Letterman show," he explains, "so every time these comedians do the show, I know it's their dream … I know how to help them get there, to be comfortable, to be poised."

Another way he helps shape the next generation of comics is with his workshops. He conducts these classes with the mindset that comedy cannot be taught but it can be work-shopped. "You can be everyone's eyes and ears," he explains. "You don't know what you do and I don't know what I do but I can tell you what you do and help you see." The classes help students hone their comedic writing, performing, and timing skills and instill the roots for a regimented work ethic. Without nonstop writing and performance, Brill says, a comic will fall apart.

Brill's upward progression emerged from following the same advice he gives to hopeful comics: Don't be afraid to make mistakes because failure can help drive a comic if he lets it. He has created that precise situation for himself, one in which he melds the knowledge of his past with his goals for the future.

"It's not like my life's all peaches," Brill says. But, to outsiders, it seems at least a bowl of very funny cherries.

Rachel Epstein (RachelSEpstein@gmail.com) is a freelance writer in New York. She adores the color pink.

Praising the Land of Israel

The Matisyahu of Stand Up Comedy
Mind Over Milkshakes
Love the Convert
In the Shadow of David and Goliath
Comments
MOST POPULAR IN Jewlarious
Our privacy policy
Aish.com Is Looking for Great Writers