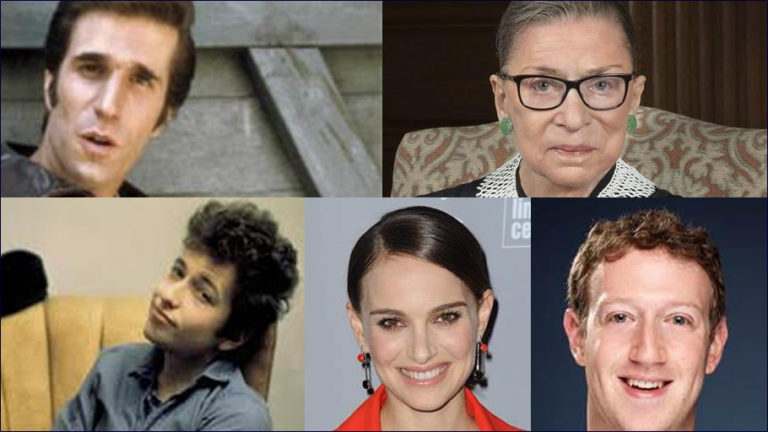 Bob Dylan attended Zionist-oriented Herzl Camp in Wisconsin where it is said he first learned to play guitar, piano and harmonica.

Let my people go - to summer camp! Ah, the advantages of attending summer camp - nurturing social skills, modeling healthy living, enhancing self-confidence, getting in tune with nature, fostering teamwork, encouraging personal growth, and, of course, getting away from mom, dad, and one’s annoying brothers and sisters for a few weeks. Jewish summer camps did all that plus fostered Jewish identity and, in some cases, served kugel.

Could these camps have planted the seeds for future success and stardom? It’s a good bet since so many Jewish celebrities apparently spent a portion of their youth there. Here’s just a sampling.

The Facebook co-founder and CEO attended Island Lake Camp, in Pennsylvania. Could the camp have nurtured the social portion of his social media skills? Or, was he so unpopular, he dreamed of the day where his every utterance would receive a Like? On its website, where you would ordinarily find an About Us page, the camp instead offers “The ILC Philosophy”: “A summer at Island Lake cannot be duplicated in any other environment.” So, don’t even try to establish an ILC branch on Neptune.

If you think you kid’s camp tuition is steep, it’s actually a bargain compared to what actress Lauren Bacall would have to pay if she attended the camp today that she did back in the day. Camp Mataponi (formerly known as Highland Nature Camps) is now hitting campers up for a whopping $12,900 for the summer session, not including personal, trip and outing expenses. No wonder Bacall later starred in “How to Marry a Millionaire”. She was no doubt planning ahead for affording the camp for her own children.

The Israeli-born Academy Award-winning actress (2010 for “Black Swan”) attended the Usdan Summer Camp for the Arts, which was formed by and now partially funded by UJA-Federation of New York. Did the camp nurture Portman’s talent? Its About Us page would indicate so: “For over fifty years Usdan has brought world-class teachers and visiting artists – actors, directors, playwrights, painters, sculptors, musicians, composers, dancers, poets and novelists – to teach and collaborate with our campers ages 4 to 18. Campers choose to “major” and “minor” in classic artistic disciplines such as painting, music, theater or dance, or in new-media fields like photography and video for social media and video-game design.” Portman seemingly never stops working as an actress, but just in case, she’s got something to fall back on – she picked up a B.A. in Psychology from Harvard University. That’s using her head.

Writer/actor/comedian/producer Larry David co-created the hit TV show, “Seinfeld”, with Jerry Seinfeld, and served as its head writer and executive producer. He went on to create and star in the HBO series, “Curb Your Enthusiasm”, playing a semi-fictionalized version of himself. David first met comedian Richard Lewis when they both attended All America Camp on the site of the N.Y. Military Academy at Cornwall-on-Hudson, New York. Although the camp doesn’t seem to be in existence anymore, I’d guess that if we asked David how his experience was there, he might respond in his “Curb” character fashion, “Pretty, pretty, pretty good.”

The Minerva, New York Camp Che-Na-Wah has been in existence for nine decades. At 85, the camp’s famed alumnus, Supreme Court Justice Ruth Bader Ginsburg, is nearly that old. She is the second female justice (after Sandra Day O'Connor) to be confirmed to the court, and one of four female justices to be confirmed (with Sonia Sotomayor and Elena Kagan, who are still serving). The camp’s website proudly proclaims that, “Every year, 95% of our campers return for another spectacular summer.” The only place that has a higher rate of return is, yes, the U.S. Supreme Court.

Legend has it that folk and rock music icon Bob Dylan first learned to play guitar, piano and harmonica at the Zionist-oriented Herzl Camp, in Webster, Wisconsin, where he would have attended under his given name, Robert Allen Zimmerman. Its mission page describes the camp as, “a welcoming, independent camp where young people become self-reliant, create lasting Jewish friendships, and develop commitment and love for Judaism and Israel. Herzl Camp creates a vibrant Jewish community of future leaders.” Not to mention future Grammy Award and Nobel Prize winners! So, does Herzl Camp get full credit for inspiring “the voice of a generation”? The answer is blowing in the wind.

Hoffman is known for his versatile portrayals of antiheroes and vulnerable characters. He won the Academy Award for Best Actor in 1980 for Kramer vs. Kramer, and in 1989 for Rain Man. He attended the Perry-Mansfield Performing Arts Camp, just outside Steamboat Springs, Colorado. According to its mission statement, “Our goal is to nurture a love of the arts in a breathtaking setting that brings students closer to nature and their artistic and personal dreams than they have ever been before.” Apparently, it worked. Hoffman may have attended the camp as a boy, but no doubt due in part to its influence, he became a “Little Big Man”.

Stand Up and Sit Down
Were Adam and Eve Jewish?
How I Learned to Love the Multiverse
10 Big Jewish Inventions
Comments