The Benefits of Wearing a Kippah 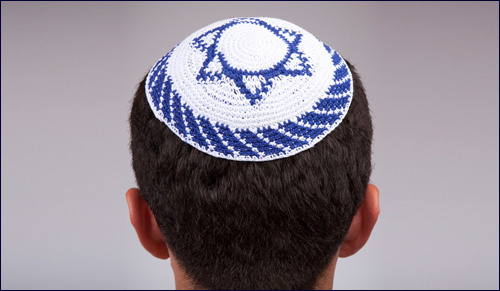 I could easily envision an insurance company running an advertisement on a kippah with the slogan, "We've Got You Covered"

A Jew is not born wearing a kippah. Then again, a Jew also is not born speaking Yiddish, singing "Hava Nagila" or yearning for knishes. (Actually, I'm not sure about that last one.)

When a Jew puts on a kippah, that Jew technically (or at least physically) has gone "undercover." Of course, in the secret agent sense, wearing a kippah is the exact opposite of going undercover because, if anything, it is an outward revelation of a one's true (Jewish) identity.

The Torah itself does not expressly require a Jew to wear a kippah. Rabbinic authorities, however, have opined that a kippah should be worn. Some suggest that the historical reason for wearing a kippah was to distinguish Jews from non-Jews. One could argue that a kippah is not always necessary to make such a distinction. For example, if you see a person at a baseball game wearing a Mets baseball cap, eating a Matzah sandwich and calling the umpire a Meshugena, then – kippah or no kippah – that person is 110% Jewish. If you believe that chicken soup can cure any illness including the flu, common cold or Ebola virus, then – kippah or no kippah – you are 110% Jewish. However, if you go to the shuk (market) in the Old City in Jerusalem and happily purchase an item at full price without even attempting to haggle, ask for a special deal or just schmooze, then – kippah or no kippah – you are not 110% Jewish.

Other rabbinic authorities insist that wearing a kippah is an act of piety and a helpful reminder to live a Torah-infused and Jewishly-mindful life. Some rabbinic sources even contend that a person should "not walk four cubits" or eat anything with an uncovered head. Of course, many Jews cannot walk four cubits without eating something, so it's best to keep the kippah strapped on regardless.

One could argue that a kippah has some added benefits and practical functionality. It can (i) serve to disguise a bad haircut, (ii) double as a toupee to cover a bald spot or (iii) help a vertically-challenged Jew appear taller. Some Jews like to wear a kippah that is color-coordinated to match the rest of their outfit, thus bringing the whole look together.

Some Jewish sports fans like to wear a kippah that promotes their favorite team. Of course, not every Jew puts the name of their favorite team on their kippah. For example, if for some reason a Jew is rooting for Texas Christian University or California Baptist University, that Jew probably will not be wearing a kippah bearing the names of those institutions. Indeed, it might be strange for a Jew to root for these schools, unless they were playing against the University of Anti-Semitism.

Other Jews like to wear a kippah that they received as a handout at a wedding or bar/bat mitzvah celebration. But this can lead to jealousy and hurt feelings among the uninvited. For this reason, I believe that all personalized party-related kippot should be banned, with every invitation indicating "BYOK" (bring your own kippah).

The thing about kippot that I find most shocking is that Jews do not sell advertising space on them. Some professional sports teams have started selling advertising on the players' uniforms, so extending this concept to a kippah perhaps is not as insane as it sounds. From a marketing perspective, advertisements on a kippah could be a goldmine. They can be called "Jew-mmericals," "Bubbie's Billboards" or "Aleichem Advertising." I could easily envision an insurance company running an advertisement on a kippah with the slogan, "We've Got You Covered

Bottom-line: Yes, a kippah easily could double as a fabric Frisbee, but we all should follow the instructions of Shakespeare's Hamlet who famously declared: "Put your bonnet to his right use, 'tis for the head."

Jimmy Carter and Khaled Meshal Wed in Secret Damascus Ceremony
In the Shadow of David and Goliath
Where Do the Laws of Nature Come From?
Saadiah Gaon, Rashi and Maimonides: How Three Rabbis Revolutionized Judaism
Comments