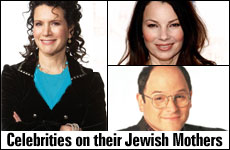 According to Dr. Bruno Halioua, author of “Meres Juives des Hommes Celebres” (“Jewish Mothers of Famous Men”), about 12,000 of France's 150,000 physicians (8 percent) are Jews, whereas Jews make up only 1 percent of the country's overall population.

"We got to talking, about our mothers,” he said. “And I realized that most of my Jewish colleagues got into medical studies because we were prompted to do so by our mothers. It's the same all over for the children of Jewish immigrants – medicine or law!” laughs Dr. Halioua. “I think that is the secret of Jewish mothers, in giving not only love like all mothers, but tremendous self-assurance to their children.”

“I was the first Jew to study medicine at the big medical cave.”

I’m proud to say that I was the first Jew to study medicine at the big medical cave. ... I graduated in a week. ... My mother was the first one in history to say, “This is my son, the doctor.” She coined that phrase. – Mel Brooks as the 2000 Year Old Man

Over the years, I’ve been privileged to interview and research many extraordinary people for my books and calendars. In honor of Mother’s Day, I bring you their equally fascinating comments about their Jewish Mothers.

Michael Medved, Nationally Syndicated Conservative Talk Show Host: “My mom insisted on buying one day old meat and baked goods. As a pre-teener, I was embarrassed, but she made the point that there’s nothing embarrassing about being sensible. She’d say, ‘People have better things in life to do than watch you.’”

“My mother was sloppy. When I was applying to college, she cleaned up the living room for my interview with Harvard. I was scrubbed, and put on a skinny tie. This guy comes in, and my dad who happened to be home, says hello ... in his underwear. She shrugged. My mother took the point of view (about the interviewer), ‘Don’t worry about this [shmegegge]. So I went to Yale … The Jewish Mother knows values and insists her children share them, live them. She’s treasures tradition. The keeper of the family welfare .... that’s her purpose in life. Her waking hours are spent figuring out ways to make her child and husband more successful and she will sacrifice. ”

Susie Essman, comic, actress (Curb Your Enthusiasm: “My mother's from the school that the minute you walk in the house you have to eat," she said an interview, describing her mother Zora. "She asks, 'What can I get you?' and if I say, `Nothing,' the question just continues. One Thanksgiving, there were only six of us, and she had two 20-pound turkeys – plus brisket. Not to mention the eight sides and 15 pies and cakes. And halvah. I went onstage that night to do stand-up and I just read the menu from her dinner.”

When I spoke to mama Zora, she had a slightly different take on the matter. “My kids don’t know this part of me ... a lot of it is, but it’s really not me. The fact is, I do make two turkeys on Thanksgiving but ... I’m trying to please everybody ... one likes this dressing, another likes that dressing. My children say I have a brisket under my skirt ... not me.”

The remarkable thing about my mother is that for thirty years she served us nothing but leftovers--Calvin Trillin.

Mallory Lewis, entertainer, writer, producer, daughter of the late Shari Lewis: “My mother’s best quality was that in her eyes I was perfect. She was always on my side,” said Mallory, whose “sibling” was a puppet named Lambchop. Was she ever jealous of her “little sister” who, when Mal was young, got all the public attention? She laughed. “Not at all. I knew she was a sock. But Lambchop was a source of comfort. Today, my own son will tell Lambchop secrets which mom will never hear!” Like her mother, Mallory is convinced her progeny is perfect. “Whenever we have a disagreement I convince him I know best because, I tell him, ‘I made you in my tummy.’ My son is going to be a wonderful hubby. Like my own mother, I support him totally.”

Norman Lear, producer: “[Some] years ago, I was pleased and honored-and amused-to address the National Press Club on .... faith, vision, and values in American life,” said Norman Lear. “The amusement was occasioned by a vivid memory of my late Jewish mother. I had phoned her and said: ‘Mom, the TV academy has just established a Hall of Fame and guess who the first inductees will be? Milton Berle, William Paley, David Sarnoff, Lucille Ball, and Edward R. Murrow, and me.’ After a short beat, my mother said: ‘Look, if that's what they want to do, who am I to say?’”

Jason Alexander: actor, “Seinfeld” fame. When Jason dropped out of college in 1980 to become an actor, leaving his New Jersey home for a studio apartment in Manhattan, to become an actor, “She wept,” he said. “That’s what Jewish mothers do. I was throwing my life away.” He told her, “Mom, in 10 years I’ll be doing Tevye on Broadway.” He beat his own prediction and did Tevye nine years later in Jerome Robbins’ Broadway. His parents, Alex and Ruth Greenspan, attended the opening – and his mom wept throughout the show, which of course, is what Jewish mothers do.

“My mother, Lily, was a phenomenal parent,” says actress-singer Tovah Feldshuh. “She was the connoisseur of tough love. She would say:

Tovah, herself the mother two, has her own philosophy. “To be a good mother, Jewish or otherwise, you need to do two things: love your children unconditionally – and show up.”

He Knows if You've Been Naughty or Nice
Big OnThe Little Things
Chraime Egg Boil
Is Grease the Word?
Comments