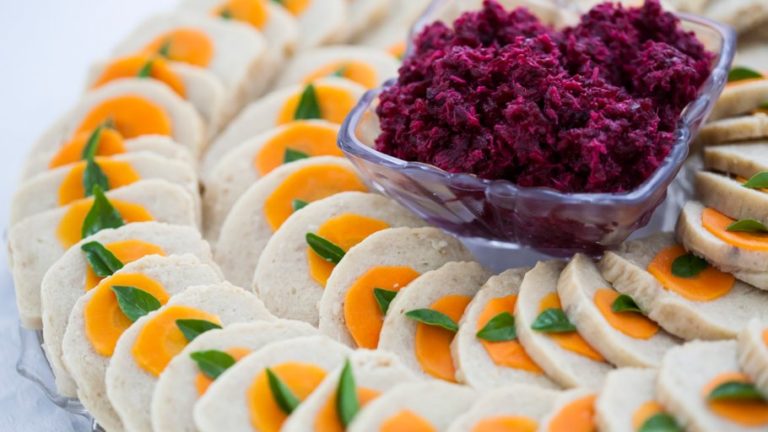 “Gefilte” comes from the Yiddish term that means “stuffed.”

If someone offered you a cold, spongy and nondescript log of ground up low-grade fish, would you be particularly enthused? Probably not. Would you be skeptical, nonplussed and possibly even repulsed? Perhaps. But if someone offered you a piece of gefilte fish then, based on the name alone, you might be excited and delighted. That is the magic of gefilte fish, a delicious Jewish delicacy that also has deep meaning and unexpected symbolism.

Gefilte, of course, is not actually the name of a type of fish; it is a Yiddish term that means “stuffed.” In typical Jewish parlance, Jews do not eat “gefilte cabbage” (even though we eat stuffed cabbage), “gefilte derma” (even though we eat stuffed derma) or “gefilting” (even though we eat stuffing). For reasons that are not entirely clear, the term “gefilte” is paired only with fish, i.e., gefilte fish, a dish commonly made by deboning, mashing up and combining similar types of fish including whitefish, carp and pike. Some scholars note that gefilte fish originally was served as a fishy stuffing that was crammed into fish skin, hence the gefilte moniker. Nowadays, most gefilte fish is not offered in a stuffed state; rather, it is routinely prepared in large logs, which means gefilte fish makers could fairly be described as culinary lumberjacks.

Some scholars believe that gefilte fish was born of necessity among European Jews living below the poverty line. Since fish was deboned before it was gefilte-ed, it allowed Jewish families to eat it not only during the week but also on Shabbat when the picking of bones is prohibited. In that connection, the Talmud describes the “anti-sorting” prohibition as follows: “[On Shabbat], one may not select waste from food, and if he did select in that manner, he is liable to bring a sin-offering. The typical method of selecting is the removal of waste from the food.” (Shabbat 74a) Thus, the boneless gefilte fish solves this problem. It also is easy to serve and is thick enough to be stabbed with a toothpick during a chaotic kiddush.

Many scholars suggest that gefilte fish is more than just a dish and actually has deeper meaning. Some point to the fact that in the story of creation, the Torah uses the term “blessing” regarding the creation of only three items: humans (Adam and Eve), Shabbat and fish. For this reason, some suggest that eating fish on Shabbat is supposed to merit a triple blessing. (Speaking of triples, a Jewish triple threat if someone who you can sing, dance and make gefilte fish.) If eating fish is a triple blessing, then it makes you wonder why on Shabbat Jews do not eat a meatless, fish-based cholent or what could be described as a Sabbath Gumbo or a Blessed Bouillabaisse.

Some scholars note that the Hebrew word for fish, dag, has a numerical value of seven (7), which also coincides with Shabbat, the seventh day of the week. So, for this additional reason, eating gefilte fish on Shabbat is another way to honor the Sabbath. Since fish equates to the number seven, football fans should eat gefilte fish whenever their team needs a touchdown. (Yes, the obligatory carrot slice typically served with gefilte fish symbolizes the extra point.)

Eating gefilte fish also is one way to fulfill the Oneg Shabbat requirement, i.e., the obligation to enjoy Shabbat. (Eating herring on Shabbat has the same effect but wearing a herring-bone suit does not.) There are other ways of enjoying Shabbat that do not necessarily have to do with food but many Sabbath-observing Jews are too busy eating or napping between meals to do anything else on Shabbat.

Finally, some believe is that fish are not subject to an “ayin hara” (evil eye) because they spend all of the days underwater and thus out of sight. For this reason, some believe that eating a fish dish, including gefilte fish, is supposed to bring good luck or at least less bad luck. The irony, of course, is that a gefilte fish dish certainly is not good luck for the fish.

Advising Guys on Buying Gifts
Deep Breaths
What Happened to the Truth?
The Japanese Everything Bagel Spice Recipe
Comments
MOST POPULAR IN Jewlarious
Our privacy policy