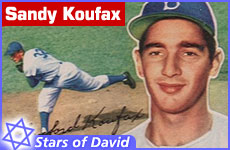 During a time when many Jews found it difficult to be different, Sandy Koufax was proud of it.

"I'm Jewish. I'm a role model. I want them to understand they have to have pride." – Sandy Koufax

Sanford "Sandy" Koufax, the "man with the golden arm," one of the greatest pitchers in baseball, established record after record throughout his relatively short 11-year career with the Dodgers.

Wait. A Jew? Lighting up a baseball diamond? “Jews own, don’t play,” right? How could a Member of the Tribe pitch for the Dodgers or Yankees? The “greats” were red, white, and blue, and they had nicknames. They were the Tommys, Hanks, Joes. They pushed crackerjacks and ate hot dogs made of pure treif. Your ma made liver and onions, and pushed kishke.

Sandy not only played ball, he did something even greater: The right thing.

Ah, but if you were a Jewish kid growing up in the 1950s we had Sandy, who could not only play ball, he did something even greater:

Koufax, born Sanford Braun on December 30, 1935, raised by mom, Evelyn, and step-father Irving Koufax, a lawyer, breathed inYiddishkeit in Borough Park. For the “uninitiated,” Brooklyn wasn’t merely a borough of New York City. It was its own planet, plunked, unaware and uncaring next to Manhattan and Queens.

Your “block” is what you remembered, back when Brooklyn was the world. And it was. Immigrants from Ireland, Germany, and Scandinavia abounded. But Jews and Italians defined it. Yiddish and Italian made a secular turn to Yinglish and Italiadish with a brave new world; one waffling equator between the old and new. From pushcarts you could get arbus; from barrels, pickles. While you got your chicken flicked, you could tell Mrs. Abrams your remedy for corns – in Ameridish. In the summer, you headed to Coney Island, or Nathan’s. Or ... sit. Stoops were more than hunks of sidewalk. They were box seats in your personal stadium. Streets, teeming with animation were the cheapest ticket in town for the greatest show in town.

But there was another. For the kids, there was “the new.” That stadium. Ebbets Field and the beloved Dodgers. Immigrant children were learning about America. And America was baseball. For many of the new generation, “Dem Bums,” was more than a team. Their fortune represented the fortune of Brooklyn itself.

Sandy Kaufax was rooted here. Like other Jewish kids, he enjoyed Yiddish theater, and a local Jewish Community Center, where he excelled at basketball. A good thing?

Despite the fact that We Jews have been “running” for 3,000 years, athletics and Judaism has always been an uneasy mix. The Judaic point of view disparages blood sports, but most important, many Jewish scholars, while appreciating the healthful benefits of athletics, fear the lure of “the game.” A Jewish lad is expected to study Talmud, not throw balls with “the goyim.”

But unlike a lot of Jewish kids, Sandy’s stepfather encouraged the young athlete, who went on to become captain of the basket team at Lafayette High School. At age 15, Koufax joined the “Ice Cream League,” where he honed his pitching brilliance. It was here he was spotted and at 17, recruited to pitch for the Coney Island Sports League's Parkviews.

And the rest, as they say… A Dodger, both in Brooklyn and Los Angeles from 1955 to 1966, he broke record upon record for wins, and awards. In 1972, he was the youngest former player to be inducted into the Baseball Hall of Fame.

For the “Herschels” that would be enough. A role model for every Jewish kid who ached to pick up a bat. Look at the crowds. And dream.

But it takes more than this to be a true Star of David. And Sanford “Sandy” Koufax did more.

October 6, 1965. The first day of the World Series ... the Los Angeles Dodgers vs. the Minneapolis Twins. This was it. The whole raison d’etre of the sport. Koufax, the team’s lead pitcher was asked to play.

October 6, 1965. Yom Kippur. Sandy Koufax refused. As he had always refused to play on the High Holy Days. He stayed in his hotel room that day (despite rumors that he went to shul).

Don Drysdale pitched and he gave up seven runs in 2 2/3 innings. "I bet right now you wish I was Jewish, too," Drysdale said to manager Walter Alston when he pulled him from the game. The Dodgers lost to the Minnesota Twins, 8-2.

The day after Yom Kippur, Koufax was visited by Rabbi Moshe Feller, regional director of the educational arm of the Lubavitch movement. He brought Sandy a pair of tefillin. "Since you bat right and throw left," he told the pitcher, "I wasn't sure what type to get you.” With the issue resolved, Feller later explained, “The Talmud says that tefillin is representative of all the mitzvot of the Torah, so I could not think of a better way to honor a person for enhancing Jewish values.”

Following the holidays, Koufax pitched Games Two, Five, and Seven, throwing complete-game shutouts in Games Five and Seven! He led his team to victory, and was named MVP.

Koufax's decision and his pitching brilliance remain a source of pride among American Jews, even those who aren't baseball fans.

Koufax quietly and firmly stood by his principles, regardless of the fall-out.

There were others before Koufax who faced similar dilemmas. But what makes this story unique is the unusual “ordinariness” of the sensibility of this humble man. How a simple, unpretentious Jew raised eyebrows even among the devout.

Sandy Koufax emerged as a Jew of conscience. It was his way of saying, “For me, for my people....it’s simply the right thing to do.”

In the 1960s, “the right thing to do” wasn’t easy, or for some, even imaginable. Anti-Semitism and intolerance still existed with Jews fighting for acceptance. And this was baseball, the World Series. America’s ultimate game.

Yet Koufax quietly and firmly stood by his principles, regardless of the fall-out. Regardless of what anyone else thought.

In that singular decision, he became known forever as the pitcher who refused to play the opening game of the World Series because it fell on Yom Kipper. And still win.

To every bar mitzvah boy and bat mitzvah girl in America, Koufax became a personal role model. Here was a Jew who could succeed in the secular world, while standing by his Jewish beliefs.

A new inspiration took hold in American Jews. Yes. We could do it. We could be Jews and still reach the top of our games -- thanks in part to Sandy Koufax, a true Star of David.

Stars of David: Henry Wallace
How I Learned to Love the Multiverse
10 Big Jewish Inventions
A Journey through Jewish Sicily
Comments