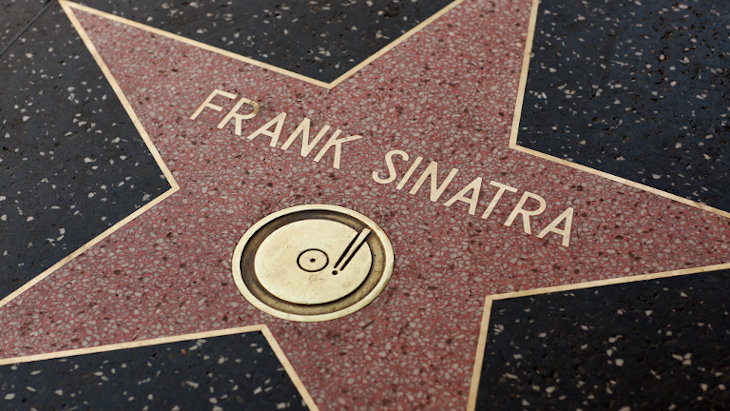 Frank Sinatra’s life was full of inconsistencies. But in his support for Israel he was remarkably consistent.

He was the poor kid from Hoboken who became what is now, and will always be one of the world’s greatest pop music icons: They Can't Take That Away, I've Got You Under My Skin, Witchcraft, Come Fly With Me, The Lady Is A Tramp, It Was A Very Good Year, Strangers In The Night, My Kind Of Town, New York, New York, Fly Me to the Moon, One For My Baby, One For The Road.

He didn’t just sing a song, he owned it.

Then there were his films: The Manchurian Candidate, From Here to Eternity, The Man With the Golden Arm, Kings Go Forth, High Society, Pal Joey, Some Came Running, Never So Few, A Hole in the Head, On the Town, and Ocean's 11 with the Rat Pack Step Lively, None But the Brave (directed by Sinatra), The Detective.

Frank Sinatra did Israel “our way.”

On vinyl, on screen, on stage, he was charismatic, hypnotic, confident. Off – stage the notes were often sour. His desperate desire for the high life, power and acceptance by the King makers often got him into trouble – with others, and within himself.

Despite all the contradictions, mood swings, and messes, one of his relatively few noble consistencies was Israel. He did Israel “our way” starting at a time when most stars, especially non-Jews, wouldn’t stand up, or gave a Pissaluto (Italian fig).

Yet we mustn’t confuse his love of Israel with a love for all “Jews.” While he’d raise a fist at wanton anti-Semitism, and offer to join a Minyan for a friend, he held some Jewish power brokers in contempt, and the ethnic insults flew. Yet, in Israel, he was so awed, he refrained from any such “jokes.” Israelis weren’t the Beverly Hills fat cats who’d treated him badly when Sinatramania waned until his comeback in From Here to Eternity (1953). They were battling pioneers.

Francis Albert Sinatra was born December 12, 1915, in Hoboken, New Jersey, the only child of Italian immigrants Natalie Della (Garaventa) and Antonino Martino Sinatra. If father, “Marty,” a local fire Captain, wanted his son to play it safe, Mama “Dolly” infused her Frankie with her fire, fearlessness, and her “direct,” if sometimes foul mouth.

With Mama’s help, Frankie went from singing for tips to making his career with Harry James, then Tommy Dorsey – though he never learned to read music, relying only on his gift of style, phrasing, and taste. By 1942, the kid inspired mass hysteria among the Bobby-Soxers who swooned over songs such as I'll Never Smile Again.

Most Sinatra fans know his life was the stuff of soaps that make today’s reality TV seem like Sesame Street.

There were his marriages: The long-suffering Big Nancy (to differentiate between daughter Nancy) who always offered comfort. The tempestuous, independent Ava Gardner. Then there were the Mia Farrow days at the behest of Old Guard Hollywood to anoint the 50-year-old Mr. S. with “the pedigree” he coveted (her parents were John Farrow and Maureen O’Sullivan). His last wife was Barbara Marx who he married in 1976 until his death in 1998. Yet getting “Ava” Gardner back was his lifelong obsession although it never ended “his way.”

The mob: He loved their personae and courted them. For Mr. S. they were “power” outside the lines; visionaries; the Big Bad Boys who would roll the dice and risk it all to get it all, even while he loathed drugs which were part of their business. The fantasy of the 97 pound weakling, was, in part, about business. Sinatra wanted to be an owner, not just a player. The mob helped him get a piece of his own rock: The new Sands, then the Cal-Neva Lodge at Tahoe. When things got dicey with the government, he changed allegiances and lost his heroes.

Politics: He famously played ball with Joe Kennedy to frolic in JFK’s rose garden. Mr. S. stumped, called in favors, screwed over pals, and spent a fortune … only to be humiliated. Once JFK was in office, the Kennedy’s summarily dismissed him. Once again, he changed allegiances.

It’s been speculated that his love for “Jews” started when an affectionate neighbor gave him a small mezuzah which he proudly wore around his neck for years. He donated a quarter of a million dollars in Israel Bonds to honor her. But his admiration for Israel was far more complex.

In Israel, he found a piece of himself; a whole country of gritty, courageous underdogs who had survived – as he had. Could there be anything nobler; more personal to Mr. S.?

Sinatra stepped forward in the early 1940s, when names were needed to rouse America into saving Europe’s remaining Jews. He starred in The House I Live In (1945), a ten-minute short film about anti-Semitism, which received an Honorary Academy Award on Israel’s 14th Independence Day in 1962.

In 1947, he sang at an “Action for Palestine” rally, and contributed substantially to the coffers when Golda Meir returned to North America to raise $50 million in private contributions in preparation for Statehood.

His big risk was in 1948. Sinatra was singing at the Copacabana in New York, controlled by the mafia with whom Sinatra had become enmeshed. The Copa was next door to the hotel out of which Haganah members were operating. When a stranger asked him to deliver a package to a cab driver at the pier, he complied without question – and with much risk. That stranger was Teddy Kollek and the package? Major gelt for the purchase of arms for the fledgling Jewish state.

Less known is Sinatra in Israel (1962), a short 30-minute featurette. That same year he gave a memorable speech in Jerusalem urging world support of Israel. (As a result, many Arab countries banned his records and films.)

Among his many donations was a million dollars for an “International Student Center” at the Hebrew University in Jerusalem Center (which made heartbreaking headlines when terrorists bombed it in 2002, killing nine people) and The Arab-Israel Youth Center in Nazareth which focuses on co-existence programs for children.

1966 was also a very good year for Israel and Mr. S. He played a role in "Cast a Giant Shadow," donating his salary to the Arab-Israel Youth Center.

Scene from Cast a Giant Shadow

For its part, Israel didn’t just roll out the red carpet for Sinatra; he was treated more like a VP than a “mere” VIP, sitting on reviewing stands with Ben-Gurion, and Moshe Dayan. When Mr. S. was uncharacteristically interested in seeing the country, including the Golan Heights, the Israelis contacted the Syrians to hold fire. If the government knew of his “other side,” well... We Jews are a practical people. How does the singer’s connection with some mobsters in Vegas compare to the vital work of insuring Israel’s survival? In 1978 Israel awarded him the prestigious National Scopus Award in recognition of his contributions.

Throughout his illustrious career, despite his mood swings and changes in allegiances, on this issue -- Israel -- Sinatra never wavered.

The King with the shaky crown died, ironically on May 14, 1998-- exactly 50 years from the official declaration of Israeli independence. The words on his grave marker are: "The Best Is Yet to Come."

Perhaps the greatest sadness is… he was one of the greats, but didn’t believe it. And the greatest joy? Millions of Israelis are better off for his courage and his comfort.

Stars of David: Rupert Murdoch
What Makes Eli Run?
The Tyranny of Materialism
Science Enters the Mysterious Inner World of Consciousness
Comments
MOST POPULAR IN Jewlarious
Our privacy policy