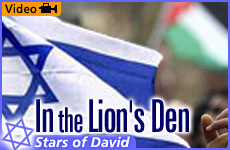 A sole Jewish high school student stands up for Israel against an angry mob of demonstrators.

In the midst of an angry mob of thousands of Muslim and far-leftist, anti-Israel demonstrators, a sole, brave, Jewish high-school student shows-up to counter what he perceived as a Muslim blood-libel against the reputation of the Jewish state of Israel.

Outside of the Israeli Consulate to L.A. on Memorial Day - a Jewish high-school student defiantly waved the Israeli flag to stand up for the Israeli Navy's handling of the Flotilla matter in the face of rumors and cover-ups.

The L.A.P.D. had to establish a human wall to intervene to protect "Daniel" (and an ensuing couple of Israel supporters) from the growing mob.

Stars of David: Frank Sinatra
In the Shadow of David and Goliath
Where Do the Laws of Nature Come From?
Saadiah Gaon, Rashi and Maimonides: How Three Rabbis Revolutionized Judaism
Comments