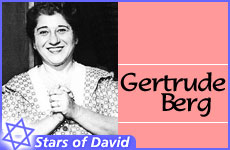 Gertrude Berg created the American sit-com. And she did it by portraying a proudly Jewish family.

It all started with those few words. The sitcom. From a character who was quintessentially, boldly, proudly and loudly, Jewish. More, a Jewish immigrant. Hear those words, and you instantly know the source (assuming you’re old enough to know that a mu mu isn’t the sound a cow makes): Molly Goldberg! The very first Jewish character on what many consider to be America’s first sitcom who fixed everyone, and everything from her family, to Mrs. Bloom, to the world, in her broken Yiddishe hecsent.

For over 20 years, “Yoo-hoo ...” was a national buzz-phrase, muttered by Americans – from Jews and Italians in New York, the Irish in Boston, to Scandinavians in Minneapolis, (to Jews again in L.A.).

America fell in love with The Goldbergs.

1930's America fell in love with The Goldbergs on radio – the lives of an immigrant family headed up by Mama Molly, along with husband Jake, daughter Rosalie, son Sammy, Uncle David – and followed this bold major nationwide portrayal of Jews and Jewish life through to 1950s television.

"It's late, Jake, and time to expire." – Molly Goldberg

Molly, through her Mollyisms, or cracked Yinglish, “shmoozed” common sense, wisdom, and compassion to further her “fix-it” mission.

“Vat's de matter, so late, Sammy? Let me look at your hands. Playing marbles, ha? A marble shooter you're gonna be? A beautiful business for a Jewish boy!" – Mollyism

Unlike Molly the character she played, Gertrude Berg the actress was highly literate. The only child of Dinah and Jacob Edelstein, born in Harlem in 1899, she honed her talent at the Jewish boarding house her parents, Dinah and Jacob Edelstein, ran in Fleischmanns, New York, where as a young girl, she entertained guests by writing and performing skits. It was also where she met her husband, Lewis Berg, a chemical engineer. The couple went on to have two children, Cherney Robert in 1922, and Harriet, in 1926.

In 1929, she submitted her script for a daily unlikely radio show called The Rise of the Goldbergs and so began one of the longest and most successful runs in media history. Berg went on to be not only a star, but the first female “hyphenate,” as creator- writer--actor long before the Streisands, Roseannes, Mary Tyler Moores, and Goldie Hawns. Even today, few, if any, have the control she had in her executive and creative roles. And she used it to stand up for Jews, and fight against abuses of the power she used so well.

“Throw an eye into the ice-box and give me an accounting.” – Mollyism

Concerned about Fascism in the thirties and the welfare of European Jews, Berg was active in many Jewish groups, before, during, and after World War II. More, she risked all when, despite intense pressure from the network and advertisers, she took a stand against the blacklist by refusing to fire co-star Philip Loeb – and she won.

No one would dare fool with Gertrude-Molly – a genuine American hit! How was it possible for a Jewish family to become not just a hit, but the prototype of a new genre, with an audience of Gentiles? For Jews and non-Jews alike to laugh with, not at her? And how did Berg accomplish this in the 1930s, when the world – and the country – was rife with anti-Semitism; where Jews had trouble getting jobs, and many restaurants, hotels and clubs had “No Jews or Dogs Allowed” signs hanging in their windows?

#The Goldbergs portrayed Jewish life with heart, warmth, and humor, but without mockery.

The Goldbergs, under Berg’s brilliant direction, did what few sitcoms have managed to do since: Portray Jewish life with heart, warmth, and humor, but without mockery.

In creating The Goldbergs, she allowed Molly to speak for all first and second generation immigrants of every ethnicity. The timing, following the second great wave of immigration to the United States, was perfect. These families, whether Jewish, Irish, Italian, or Russian, were struggling with the same issues: assimilation, old vs. new values, and having to take the hand of their children in this new land. America loved Molly because Americans knew her, or someone like her. Whether they spoke Yinglish, Italiadish, or Eiredish, it was all Ameridish.

Her Jewish humor reflected their trials, hopes, compassion, common sense, and above all patriotism, making their journey personal, amenable, and funny, as it has for We Jews for thousands of years. Is there a better way to impart knowledge of the human condition?

“Mr. Policeman, officer of the law, your honor, could you be so kindly if you would inform me of the location of where is 14th St.?" – Mollyism

American Jews were proud of Molly. Few decried the stereotypical accents and images. For the first time in history, our heritage was brought to the forefront of mainstream culture in a gentle, respectful vehicle, that was also fearless, satirical, and wise – which are the kishkes of most good Jewish humor.

Through Molly, we also saw how, in the right hands, the truth of our ethnicity, could entertain, inform, and strike a universal chord.

Without Berg’s courage and risk, a Sid Caesar, Joan Rivers, or Jackie Mason would be playing to an audience of 50 at the Flatbush Knights of Pythias, and a Seinfeld – wouldn’t be, altogether.

In the 1950s, like many immigrants, the Goldbergs “moved on up” from a New York tenement, to the Bronx, to Connecticut – then to cancellation in 1956. A generation had passed. Assimilation ceased to be front page news. The babies had boomed. As Jews “melted” into suburbia, appearing to, and desperately wanting to turn from kugel to apple pie, the issue itself was driven underground, along with positive Jewish images.

End of an Era

After The Goldbergs ended, Jews “disappeared” on air for two decades. The Vanilla families – The Nelsons, the Cleavers, the Andersons, and the Stones -- reigned in Main Street U.S.A.

Then, in the 1960's, a little egg cream once again entered the Land of Vanilla. Carl Reiner created what became The Dick Van Dyke Show with a Jewish family and workplace in mind. Ultimately the only openly Jewish character was Buddy (Morey Amsterdam who had a bar mitzvah on the show!), but the “groats” served was pure kasha. Not only was the tone Jewish, but other “probable” Jews included The Helpers, Rob and Laura’s friends, Alan Brady, the thinly disguised “Sid Caesar,” and Mel, the lackey brother-in-law.

Then came Rhoda (played by non-Jew Valerie Harper), Mary’s gal pal on The Mary Tyler Moore Show. When “Rhoda”spun off, enlarging the role of her family, we saw a marked change in how Jews were portrayed. Sitcoms, now in their adolescence, were rife with rebellion that reflected the turbulent 1960s and 70s. Many male writers were conflicted over their Jewish traditions and traits, which they perceived as obstacles – but not to getting a quick laugh on the back of exaggerated stereotype. Mothers, especially, took heat, or, a Jewish character was the foil for the “straighter” gentile, in shows such as Bridget Loves Bernie, Mad About You, The Nanny, Will and Grace, Curb Your Enthusiasm, and even Seinfeld (when any parent is involved). The exception was Brooklyn Bridge (1991), based on producer (Family Ties, Spin City) Gary David Goldberg’s early life, the show was an authentic look at Jewish life. Sadly, it lasted only two seasons, was a great disappointment.

Hello Molly? Today, we’re seeing indications of change. In Will and Grace, Grace married “in!” In drama, Jews are more “normalized” in House, Law & Order, NCIS, among others.

Is America “ready” to use cutting edge humor to portray Jewish values?

If so, we can finally be true to Gertrude Berg’s legacy.

Stars of David: Henry Wallace
Near Death Experience Panel
The Western Wall: The Heart of the World
Ask the Right Question: Tisha B’Av
Comments
MOST POPULAR IN Jewlarious
Our privacy policy
Aish.com Is Looking for Great Writers