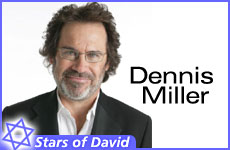 Comedian Dennis Miller rants in support of Israel. Sadly, he’s one of the only ones.

Put “Dennis Miller, Israel” in any search engine and this is what you’ll find:

"The Palestinians want their own country. There's just one thing about that: There are no

Palestinians. It's a made up word. Israel was called Palestine for two thousand years. Like "Wiccan," "Palestinian" sounds ancient but is really a modern invention.

As soon as the Jews took over and started growing oranges as big as basketballs, what do you know, say hello to the "Palestinians," weeping for their deep bond with their lost "land" and "nation."

... let's not use the word "Palestinian" any more to describe these delightful folks, who dance for joy at our deaths until someone points out they're being taped. Instead, let's call them what they are: "Other Arabs Accomplish Anything In Life And Would Rather Wrap Themselves In The Seductive Melodrama Of Eternal Struggle And Death." I know that's a bit unwieldy ... How about this, then: "Adjacent Jew-Haters.”

And so, we have a dose of pure, unsheathed Miller. Or at least the punditry, the dry, biting wit of the political wiseacre – the “telling it like it is” point of view, we’ve heard since his SNL days.

Like "Wiccan," "Palestinian" sounds ancient but is really a modern invention.

Wrong! The above piece ... the piece that’s been hailed, hated, even exalted by the millions

who’ve read it on the Net is by Miller. Just not that one.

It was written by Larry Miller. A comic, actor, a “Dennis” contemporary – and a Jew.

The mix up, much like crop circles and the Roswell alien, has become such an urban legend it even has a name: With deference to Chaucer, it’s called “The Millers’ Tale.”

To borrow Lincoln’s quote (also often confused with Carl Sandburg), “You can fool some of the people all of the time, and all of the people some of the time, but ..." So, why then, in this age of mega-media blasts, gargantuan search engines, and global “reach out and touch,” was it so easy, so natural, to get the authorship so wrong, so ... often?

Today, it wouldn’t be unfair if we switched punch lines to: “The Number of Jewish Celebs-Comics standing up for Israel!”

The proof is in the goof.

Simply, have we – Jews and gentiles alike – come to assume only a Hollywood gentile with a conservative agenda would dare “open a [big] mouth” about Israel?

Kudos to Larry Miller. No. I don’t know his politics. Frankly, who wants to look?

Yet, we do need to examine the whys of this strange snafu. True, the last names are the same. But this attribution is more than a copy edit mistake. Look:

Saudi Arabia, anybody trust these cats? I think the Saud Royal family has turned that place into

the hypotenuse of a… triangle with Iraq and Iran. They are a bunch of transparent suck ups.’”

Now, that’s Dennis. In all his sometimes torturous, metaphorical glory. The guy who gave “ranting” a new cultural meaning, starting diatribes with "Now I don't want to get off on a rant here..." ending with, "Of course, that's just my opinion, I could be wrong."

The boomer pundit, who rose to fame as SNL’s "Weekend Update" anchor (1985), hosted a string of talk shows on HBO, CNBC, (garnering Emmys but not viewers), tried an ill-fated stint as Monday Night Football commentator, and now, along with regular spots on Fox, hosts a highly successful daily, three-hour, nationally syndicated talk radio program -- is said to have gone through a political “epiphany,” when he switched teams to become an A-list Republican, or more precisely, “a neo-conservative-libertarian” after 9-11.”

Yet, if you examine the man closely, the change seems less an epiphany than a personal “maturation.” Looking at his background, it just may be he was politically “transgendered” – “trapped” in the wrong party, only to be freed by the American tragedy.

Except for the bombs they strap to their chest, I have absolutely no idea what makes the Palestinians tick.

Except for the bombs they strap to their chest, I have absolutely no idea what makes the Palestinians tick.–Dennis Miller

Don’t let the sharp tailoring, smirk, and arcane cultural references from Ayn Rand to Homer Simpson (in one sentence) fool you. According to those who knew him early, “Little Denny Miller” of Castle Shannon, PA, is just a guy. He and his four sibs were latch-key kids, raised by mom, Norma, a dietician. (Their absent father remains a public mystery.) No highbrow Bev Hills “haute” in this “mixed-bag” suburb of Pittsburgh, that was primarily Scotch-Irish Americana, populated by honest stiffs, a short generation away from the coal mines. No highbrow pretensions either. Just blue-collar, hard-working people, bound to basics, spewing the no frills common sense, often attributed to “Middle America”: the belief that big corporations take advantage of the little guy, big government is the bogie man (along with insurance companies), and the really really bad guys deserve the chair.

For sure, Dennis was grounded more by “coal” than silver spoons. After graduating Point Park College in Pittsburgh (1976), he took his journalism degree to careers such as flower truck delivery and ice cream scooper, while honing his craft on local television. Yet, despite ragging on crass materialism, he unabashedly wanted more. And now that he’s got it, he won’t flaunt it, but he’s no doubt thinking, “Hot diggity! If they could see me now!”

The irony amuses him. Incongruity fuels his highly crafted metaphors, which require the jaws of life to untangle. The string of words is definitely not Castle Shannon, but strip them away, and it’s pure angry-everyman-speak, a lonely Hollywood “stand-up,” standing up – on “sensitive” issues. Including Israel.

I find Yasser Arafat to be an enigma, ostensibly one of the world’s most dangerous men, yet it would appear that at any given moment Ariel Sharon can give him a time out. “Young man, You go to what’s left of your room right now!” – Dennis Miller

“Hey buddy, you should feel guilty!” is Miller’s message, a sane man, driven to “rant” by the madding crowd around him. An intellectualized Howard Beale in Network ranting eloquently, "We're mad as hell and we're not going to take this anymore."

It’s no coincidence that Network (1977) was the brainchild of two Jews, Paddy Chayefsky (writer), Sidney Lumet (director). And if Dennis’s story feels a bit familiar that too is no coincidence to Boomer Jews, who came from homes, and values, not unlike Miller’s. Homes that stood up for the little guy. Homes filled with sachel–good common sense. Homes that understood, first-hand, what it meant to be different, to have to scratch if we were to climb out of “Nowhere” – Canarsie, Bensonhurst, Flushing – to Somewhere.

But more -- homes in which our parents and grandparents sobbed, when, at midnight, May 14, 1948, the Provisional Government proclaimed the new State of Israel.

I’m not even Jewish, but I feel great empathy for the Jewish people.

So the uneasy question remains. Where the heck are We Jews? Or, more precisely, the big-gun, A-lister Jews? We Jews who are masters of guilt, debate, and are comedic royalty are either silent – or oddly shvach-y (weak).

So, we have our answer to the Millers’ Tale mix-up.

Simply, we’ve come to assume only a Hollywood gentile would tell it the way many of us wish we could. And don’t. Because, hey -- Dennis Miller is a WASPY sorta guy, right? No skin off his Scottish nose stomping for “our” home team.

No Big Sensitivity Issues about whether we’re “American-Jews” or “Jewish-Americans.”

No fervent memories of “putting something in the pushke” for Israel.

Or, worst of all, no hint of an unassimilated American, “mucking” up our hard-won red, white, and blue values of “fair play” – an American Jewish obsession.

The Diaspora has become more disengaged from the Land of Israel. I’m not even Jewish, but I feel great empathy for the Jewish people. I sometimes look at the elections that go on, and think for God sakes, you want to be on the side of the guys who are your [enemies]?! – Dennis Miller

Well, politics aside – no. We can’t put politics aside. The issue of “Israel” is all about politics. And ideology. Just ask Dennis Miller, who dares rant pro-Israel. And who dares challenge We Jews, Liberal or Conservative, to take a stand, or risk losing the choice.

Stars of David: Rupert Murdoch
It Takes A Lot Of Faith To Be An Atheist
How Instagram Brought Back This Nostalgic Soup
What Makes Eli Run?
Comments
MOST POPULAR IN Jewlarious
Our privacy policy