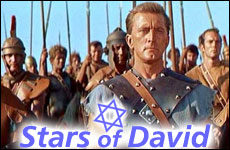 Jewlarious is launching a new series profiling people who have stood up for the Jewish People or Israel.

Welcome to the first article in the new Jewlarious series entitled, “Stars of David. This series will tell the stories of Jews and non-Jews in the entertainment industry and beyond who have stood up and declared themselves to be supporters of the Jewish People or Israel through their words and actions. Like the men who shouted “I’m Spartacus” in the classic Kirk Douglas film, each of the men and women we will profile had their own “I’m Spartacus” moment; they did something significant but unpopular and against their interests on behalf of the Jewish People or Israel because it was the right thing to do.

An “I’m Spartacus” moment refers to a dramatic and iconic scene in the film “Spartacus” which was brought to screen single-handedly by Aish Hatorah supporter Kirk Douglas in 1960. Although the efforts of Spartacus end in defeat, there is a triumph of the spirit and a message for the ages in the “I’m Spartacus!” scene [see below]. The defeated rebel gladiators are presented by their Roman captors with a terrible choice. They can avoid the painful and slow punishment of death by crucifixion and can become slaves again by identifying Spartacus. Alternatively, they can remain silent and die slowly on the cross. Kirk Douglas as Spartacus wants to spare them of this choice and fate and starts to stand up to declare who he is. However, he is preempted by his own men who each stand up and shout “I'm Spartacus!” The hillside where the thousands of defeated gladiators stand up in their chains rings loudly with their shouts and into the ears of their astonished captors who have never witnessed such loyalty and bravery for a man and cause.

The “Stars of David” section will tell the “I’m Spartacus!” stories throughout the year to give recognition to those people of conviction and courage and to inspire others to stand up for the Jewish People and Israel during these trying times.

Click here to read the first article in the series, "I Am Issur."

Stars of David: Frank Sinatra
Scientific Curiosity and the Divine Encounter
Mind Over Milkshakes
Love the Convert
Comments
MOST POPULAR IN Jewlarious
Our privacy policy
Aish.com Is Looking for Great Writers