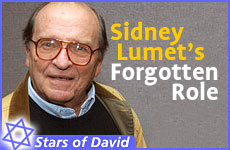 Standing up for the Zionist cause and for black civil rights.

Academy Award-winning film director Sidney Lumet, who passed away on April 9 at age 86, is remembered for classics such as “Twelve Angry Men,” the courtroom drama that challenged racial prejudice and which Supreme Court Justice Sonia Sotomayor has cited as a major influence on her career.

What is not widely known is that before he became a director, Lumet, as a young actor, was at the center of a 1940s controversy in Baltimore involving Zionist activists and the fight over racial segregation. I recently had the opportunity to speak with Lumet about that unusual episode in the civil rights struggle.

In the summer of 1946, hundreds of thousands of Holocaust survivors languished in Displaced Persons camps in postwar Europe. The British refused to let them enter Mandatory Palestine, for fear of alienating the Arabs. In New York City, the Jewish activists known as the Bergson Group came up with a new way to publicize the survivors’ plight: a Broadway play. They called it “A Flag is Born.” 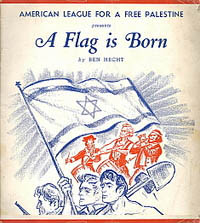 Ben Hecht, the Academy Award-winning screenwriter, was active in the Bergson Group. So were the Adlers, the “first family” of the Yiddish theater. Hecht wrote the script for “A Flag is Born.” Luther Adler directed it. Adler’s half-sister Celia and another ex-Yiddish theater star, Paul Muni, co-starred as elderly Holocaust survivors straggling through postwar Europe.

Their sister Stella, the statuesque actress and acting coach, cast her most promising student, 22-year-old Marlon Brando, in the role of David, a passionate young Zionist who encounters the elderly couple in a cemetery. Celia Adler’s son, Prof. Selwyn Freed, told me: “When my mother came home from the first rehearsal, she said of Brando, ‘I can’t remember his name, but boy, is he talented’.” The actors all performed for the Screen Actors Guild minimum wage, as a gesture of solidarity with the Zionist cause.

“Flag” played for 10 sold-out weeks at Manhattan’s Alvin Theater (today known as the Neil Simon Theater). British critics hated it. The London Evening Standard called it “the most virulent anti-British play ever staged in the United States.” American reviewers were kinder. Walter Winchell said “Flag” was “worth seeing, worth hearing, and worth remembering… it will wring your heart and eyes dry… bring at least eleven handkerchiefs.”

Victor Navasky, publisher emeritus of the political weekly The Nation, was a teenage usher who collected contributions for the Bergson Group after each performance. “The buckets were always full,” he told me. “The audiences were extremely enthusiastic about the play’s message. For me, too, it was a political awakening about the right of the Jews to have their own state.”

After New York City, “Flag” was performed in Philadelphia, Boston, Chicago, Baltimore (and, reportedly, in a DP camp in Europe). Brando’s contractual obligations prevented him from taking part in the out-of-town shows.

He was replaced by Sidney Lumet.

Lumet was just 22 at the time, but as the son of Yiddish actors Baruch Lumet and Eugenia Wermus, he had been on stage since childhood and made his Broadway debut at age 11. Lumet told me that having grown up in the world of the Yiddish theater, it was “a special thrill” to perform alongside Paul Muni in “Flag.” (He did not know Brando well at that point, but Lumet would later direct him in the 1960 film, “The Fugitive Kind.”) Lumet’s future first wife, Rita Gam, also had a minor part in “Flag.”

When Lumet and the other cast members of the Broadway hit arrived in Baltimore, local reporters were clamoring for interviews. Lumet spoke to the Baltimore Sun about the inspiring struggle to rebuild the Jewish homeland. “This is the only romantic thing left in the world,” he said. “The homecoming to Palestine, the conquest of a new frontier, against all obstacles.”

On the eve of their performance at Baltimore’s Maryland Theater, controversy erupted when it turned out that the theater restricted African-Americans to the balcony. Neither Hecht nor the cast would tolerate such discrimination. The Bergson Group and the NAACP teamed up to protest: the NAACP threatened to picket, and a Bergson official announced he would bring two black friends to sit with him at the play. The management gave in, allowing African-American patrons to sit wherever they chose.

NAACP leaders hailed the “tradition-shattering victory” and used it to facilitate the desegregation of other Baltimore theaters. Lumet, reflecting on the episode six decades later, told me was “very proud” of his part in the protest and “pleasantly surprised that it was so successful.”

For the Bergson Group and its supporters, the fight for civil rights in Baltimore was just as important as their fight for Jewish rights in Palestine. As Ben Hecht put it: “To fight injustice to one group of human beings affords protection to every other group.”

Sidney Lumet’s admirers will remember his extraordinary talents as the filmmaker of “Serpico,” “Dog Day Afternoon,” or “Twelve Angry Men.” But it’s also worth remembering the role he played in the real-life fight for justice six decades ago.

Reprinted from the Jewish Ledger.

Stars of David: Frank Sinatra
Bechukotai 5782: Divine Retribution
Behar 5782: Working to Live or Living to Work?
The Wholeness of Being Broken
Comments
MOST POPULAR IN Stars of David
Our privacy policy