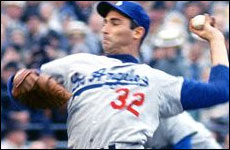 Finding the courage to make the right decisions.

I can still vividly recall the day.

The World Series was starting and the best pitcher in baseball was Sandy Koufax. Sandy was our hero; he was Jewish and he was from Brooklyn and he played baseball. What more could you ask for?

It was October of 1965 and the Dodgers were playing in the World Series. The rumor mills had already begun to churn out their dispatches. The first game was scheduled to be played in Minnesota on October 6th. That day, a Wednesday was Yom Kippur; would Koufax pitch?

He had never pitched before on Yom Kippur; however, that was during the regular season and this was the World Series.

Religion was nice, but this was the World Series!

To everyone’s surprise and to our glee, Koufax refused to pitch!

On national television he announced that he is a Jew and he would not play on Yom Kippur. As we boys huddled in the lobby of Shul that Kol Nidrei night the talk was not on Teshuva, rather, it was on Koufax.

“Did you hear? Koufax would not pitch because it was Yom Kippur!”

Sandy Koufax made a decision and by doing so he made us proud Jews.

This was a time when yarmulkes in the work place were rare and almost never seen outside of Borough Park. It was a time when you kept your Judaism in the home and we hoped the non-Jews would not laugh at us as we walked to Shul on Yom Kippur in our Keds.

And here was Sandy Koufax, a Yiddle from Brooklyn just like us, telling the world that tonight is Yom Kippur and “I don’t pitch on Yom Kippur.”

It is difficult for me to describe the feelings of pride and joy of being a Jew as we went to Shul that Yom Kippur, indeed Sandy Koufax himself was going to Shul!

On August 7, 1972, Sandy Koufax became the youngest person in the history of baseball to be inducted into the Hall of Fame, no one since has ever been inducted at a younger age.

This year, August 7 was also the first day of Elul. In Europe of old they would say that even the fish in the local ponds would shudder in fright on the first of Elul.

For the next month we will blow Shofar daily (except for Shabbos and Erev Rosh Hashanah).

The Shofar awakens us to make decisions.

It awakens us to make the ‘right’ decisions.

Those decisions are not always popular and they are not without critique.

We may be pressured to sacrifice our attempt to keep kosher in the work place from time to time.

We may have work deadlines and we have to make a decision to leave the office early on Friday afternoon to be home for Shabbos.

This year with three ‘three-day Yom Tov/Shabbos’ combinations, we may be tempted to cut corners and slack off on our observance level.

However we can all take a lesson from Sandy Koufax and his decision to remain firm in his conviction to do what is right irrespective of the pressure to sacrifice our principles.

Sandy Koufax had nothing to gain and everything to lose when he stood up and said, “I don’t play on Yom Kippur.” He did what he did because he knew (based on where ‘he was holding’ in his Relationship with his creator) that this was the correct decision. His heart told him that this was the right thing to do.

The gematria value of the Hebrew word “lev” (heart) is 32.

Sandy Koufax went after his heart that October over 45 years ago.

The shofar in Elul awakens us to remember that we too must follow our heart even if and especially when it is not the easy thing to do.

Zev Wolfson: One of a Kind