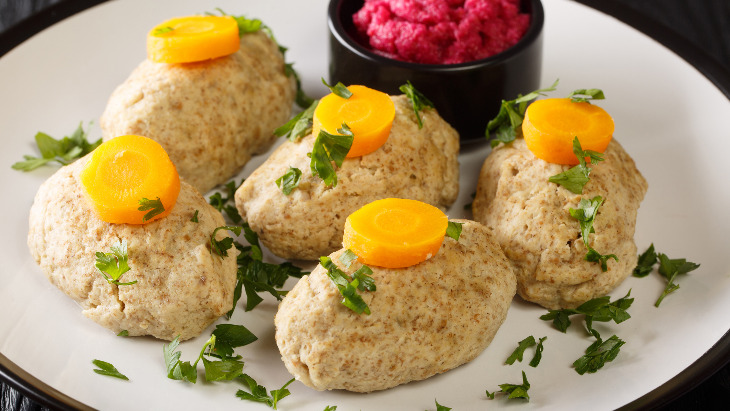 Gefilte fish is one of those foods that people either love or love to hate. Those that don’t like gefilte view it as the hurdle to be crossed before enjoying the traditionally more palatable Pesach dishes like matzah ball soup, brisket, and kugel. But for those that love it, nothing else compares. Upon mentioning to friends and family that I recently started experimenting with new variations on the traditional fare, I was confronted with a variety of memes- some even going so far as to conjecture gefilte as the predominant cause for historic moments of political upheaval. While I am not so sure about that last part, this fish dish does have a rich history and endless preparations.

Primarily billed as an Ashkenazi Jewish food, consumed on Passover and often for Shabbat,

the word “gefilte” means “stuffed.” The first known recipe for gefilte fish was written about 700 years ago in a non-Jewish German cookbook- “gefuelten hechden” (stuffed pike) and was ground, poached then stuffed into the skin of the fish from whence it came and roasted. It was served as a Catholic dish for Lent. At some point during the Middle Ages, the dish was adopted and adapted by German and Eastern European Jews under the name “gefilte.” People in some parts of Europe made it sweet, due to the availability of beets, while in other areas, pepper was used for seasoning. Eventually, the process

became streamlined, and people stopped stuffing it, yet continued poaching it and added fillers such as matzo meal and egg to bind the loaves.

When time became even tighter surrounding WWII, gefilte fish was commercialized and sold in cans and jars, as we find it in stores today. I am not a fan of these varieties. TBH, unrefrigerated fish floating in questionable liquid kind of freaks me out. However, premade gefilte fish can also be bought as a large, frozen loaf, easily doctored up with any spices or marinades you choose. Many people swear by this method, and I would probably make it this way if I could.

But I live on the Gulf Coast of Florida, where frozen gefilte fish is not readily available. The good news is we have access to fresh fish in abundance! So, I make it myself with sustainably caught, local fish, which I grind in a food processor. I will use whatever is available at the market. I have made this recipe with grouper, snapper and sole. Any white-fleshed fish will work. I cut the deboned fish into smaller pieces and grind it in my small food processor until it is silky smooth. I like to add fresh parsley and raw sweet onion when I grind it, as this cuts some of the fishiness, but any fresh herbs and onion will do the trick.

I recently decided to get adventurous and garnish with mango salsa, since it works well with fish. The tang, acidity, and heat provide a great substitute for traditional horseradish and give the dish a colorful, tropical, and modern flair. The sweetness offsets the savory as I do not add sugar to my gefilte fish.

When mangoes are in season I make the salsa myself with juice from a lemon and a lime, one chopped jalapeno, one diced mango, a handful of chopped cilantro, and salt and pepper to taste. When not in season or if I am pressed for time, I use mango salsa from the store.

Give it a shot. You might find that even the gefilte-haters among you are pleasantly surprised by this updated take on a classic. 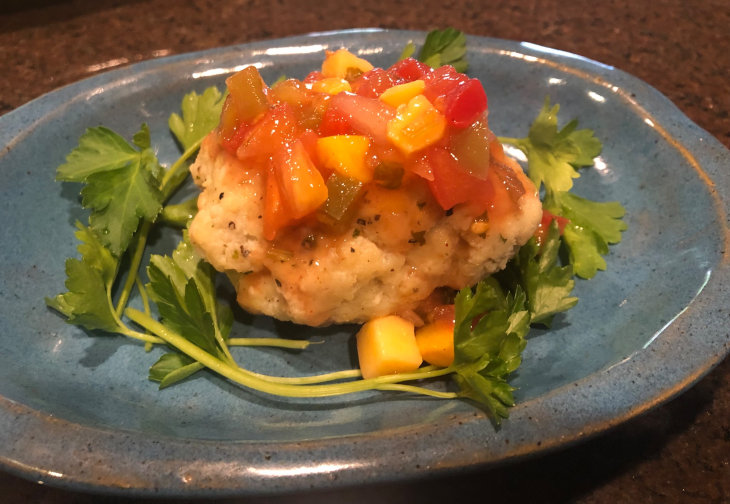 ChrisAnn Allen honed her journalism skills as the lead reporter for a weekly newspaper on the Gulf Coast of Florida. She also has a background in photography and video, with a masters degree in documentary video journalism from the University of Florida. In addition to writing and video, her editing experience has landed freelance work proofreading articles, press releases and video scripts. ChrisAnn's passion for storytelling commingled with a love of food, serves her well in her current role. When not in the kitchen testing out a recipe, shooting the process, or writing about it, she can be found frolicking at the beach with her family or enjoying a yoga class.

Dirty Soda Made Jewish Recipe
The Promise Of The Land
Which Chat Are You On?: Parshas Behar/Lag Ba’Omer
Do You Like Slow-Cooked Food? Thank the Jews
Comments
MOST POPULAR IN Food
Our privacy policy