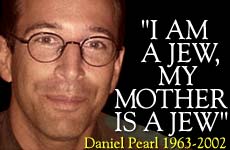 I don't know what kind of Jew Daniel Pearl was -- if he went to synagogue regularly or thought about keeping kosher. And it just doesn't matter.

These days in Israel, I've noticed that cab drivers no longer only say "have a nice day" when you get out of the cab. Instead they say, "Have a quiet day." By that, they mean: "Let's hope no one dies today." Because it seems that almost every day comes another horror – two teenagers blown up in a pizza shop, an old man bludgeoned to death in a soccer stadium just inside Palestinian territory, a mother and her developmentally disabled daughter shot in their home by a demon who will later be proclaimed a hero by people who live a half hour's drive from me...

Not every few months, or few weeks; the unthinkable is occurring so frequently that thought stops.

With each headline, I pause and reflect... and it is too much and I close my eyes tightly. I try to comprehend how this happens, how can they do this...

On Friday, shortly before I ran out for Shabbat, I saw that Daniel Pearl, the Wall Street Journal reporter, had been killed by his captors. I can't say that I was surprised. But, still, I had a moment – longer even than usual – where I grieved.

I read the obituaries: about his joviality, his love of music, his propensity for walking around the newsroom in bare feet. And the reports were now "releasing" the information that Daniel Pearl was Jewish. To us – to Jews – this came as no surprise. His name, his face... we already knew that. And as silly as it seemed that his captors might not know it themselves, I understood why his family had asked that it not be reported.

It wasn't until after Shabbat that I read what Daniel Pearl's last words were:
"I am a Jew. My mother is a Jew..."

It was the last thing he uttered before one of the captors slit his throat.

That was apparently the last thing he uttered before one his captors stepped up behind him and slit his throat. Then they beheaded him, and they videotaped the entire grisly spectacle. Those words – they beheaded him – must be said in a whisper. They don't make sense, even to me – and I live in a place where children are killed for eating pizza.

Things like that don't happen. The gruesomeness of it, the barbarism...

But that's not what stuck in my head.

He was a Jew and his mother was a Jew.

I don't know what "kind" of Jew he was – if he went to synagogue regularly or thought about keeping kosher, if he considered himself a member of any of the particular "streams" of Judaism (maybe he was Refoconservadoxal) or not, or if his pretty wife is Jewish, or if he planned on giving the son she is carrying a bris.

And it just doesn't matter.

This is something that the wicked men who killed him understand, sometimes, much better than we do. Whether he was right or left, whether he was completely assimilated or wildly and fervently observant – Daniel Pearl was just a Jew.

As I sat reading eulogies, with tears brimming in my eyes, Mordechai's admonition to Esther came into my head: "Do not imagine that you will be able to escape in the king's palace any more than any other Jew."

Just like the old man beaten to death in a soccer field, like the teenagers eating pizza, the mother and daughter... They all committed the same crime: Being a Jew.

I do not understand.

This past Shabbat, we read Parshat Zachor, when the entire congregation repeats: "Remember what Amalek did to you on the way..."

Amalek led his tribe in an attack on the Jews as they wearily made their way out of Egypt. His deeds were most dastardly: he attacked the Jews' rear, where the old and sick and weakest were. Ironically, he was a grandson of Esau's – and therefore not-so-distantly related to the Jews. And yet he attacked just after the miraculous splitting of the Red Sea: He feared neither the Jews nor God.

Why did he do it? Our sages answer simply: because Amalek was evil.

Not forgetting what Amalek did to us on means remembering that there is such a thing as simple wickedness, and remembering Amalek rebukes the notion that everyone is motivated by some sort of rational self-interest.

Evil deserves only to be eradicated.

Thousands of people were slaughtered as they sat in their offices in New York and there are those who say we must "understand" why those who perpetrated the deed did so.

Evil cannot be simply explained by reason. Evil deserves not to be understood, twisted into some shape that we recognize as rational behavior: Evil deserves only to be eradicated. Our charge to remember Amalek confronts us with that.

We so want to rationalize evil into something we can wrap our intellects around: We want to believe that Hitler had some sort of gruesome Jewish kindergarten teacher and acted out his frustrations on the whole Jewish people. Mordechai set off Haman's dreadful inferiority complex. And maybe Amalek himself had appallingly low self-esteem?

Nor can we any better understand the actions of the men who stepped in front of a video camera and murdered Danny Pearl.

When he said that, they killed him. We know for what he was executed, what crime he committed.

Parshat Zachor concludes: "It shall be that when God lets you rest from all your surrounding enemies in the land that God gave you as a heritage to bequeath, you are to erase the memory of Amalek from beneath the heaven. Do not forget." And, just like the old man in the soccer field, and the mother and daughter, and the kids in the pizza shop, we must never forget what Amalek did to Danny Pearl.

And after I am galled each time that I can go on with my day after the choking pause when I hear about the old man, or the mother and daughter, or the kids... or Danny Pearl, I know that going on, going downtown, refusing to be cowed by the fear the modern-day Amaleks spread, continuing to live life as a proud, committed Jew – that is the only victory I understand.

The Bride who Visited a Hospital on her Wedding Day

My Value as a Jew