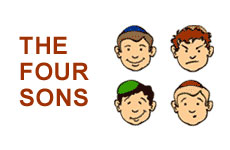 The Four Sons serve as a wonderful model on how to transmit our rich heritage effectively, tailor-made to each child's capacity and way of learning.

With these words, the Haggadah introduces the Four Sons and explains how each should be taught.

The Four Sons serve as a wonderful model on how to transmit our rich heritage effectively, tailor-made to each child's capacity and way of learning.

The values of the Torah are timeless and so every generation finds a new way of interpreting the Haggadah which has meaning in it for them.

Below you will find one way of understanding the Four Sons in relation to modern day, as well as some ideas how to transmit the key lessons of the Haggadah to your children geared to ages 8-14.

You can look at the four sons as four generations of Jews in America today. The first generation of eastern European Jewry who emigrated to America at the turn of the century are represented by the Wise Son. This is the Jew who grew up with a strong connection to the Jewish way of life. It is inconceivable for him to think of working on Shabbat. He would work from Monday to Friday, observe Shabbat and get fired for not coming to work, and look for other employment the next week. He knows why Judaism is important. His commitment is unshakable.

His son, the second generation, is represented in the Wicked Son. This is the rebel who wants to succeed in his new life and take on Western values. Although he has grown up in a home full of Jewish values and an integrated Jewish life, he rejects this in favor of integrating into Western society and becoming accepted as the new American.

His son, the third generation, is represented by the Simple Son. This child has spent Seder nights at his grandparents' table, has seen his grandmother light the Shabbat candles. He has a spattering of knowledge picked up at Hebrew school, but he doesn't know the meaning behind any of the symbols and is not very motivated to go beyond what he sees.

His son, the fourth generation, is represented in the "One who doesn't know how to ask." This child does not have memories of his great grandparents. He celebrates the American holidays and other than knowing that he is a Jew, has no connection whatsoever to Judaism. He sits at a traditional Seder night and does not even know what to ask because it is all so foreign to him.

Today there is a fifth son, who is off in India or out at the movies on Seder night, not even aware that Passover exists. Anyone sitting at the Seder table is still connected to the Jewish people and heritage just by being there. We just need to get him curious and interested enough to ask a question that interests him and you can open the door for him.

Judaism requires one to take a responsible and active role in the world. The One Who Doesn't Know How to Ask has relinquished the natural drive to ask. He takes no interest in what is going on around him and demonstrates a lack of care. Once we stop caring, we can easily permit bad things to happen, and wait for others to stand up to fight for what is right.

Prepare four cards with the names of the four sons, each one of the sons representing the four generations (as explained above).

How to Play: Whoever picks the card, has to ask someone else a question about anything to do with Passover or anything about Jewish tradition from the perspective of that particular son.

"The Simple Son" might vaguely remember eating matzah at his grandfather's Seder, but he can't remember why. He might ask, "What's this?" pointing to the matzah or any other symbol on the table.

"The One Who Doesn't know How to Ask" doesn't have a question. So try to coax him to ask. For example:"Johnny, have you ever tasted matzah before? It's kind of hard and not so great for the digestive system."

Ask your kids, if they wanted to pass on a family tradition through the generations, how would they ensure that it gets passed on?

Ask your grandparents or older people at the table if there are any family traditions that have been passed on through the generations?

How are our Jewish traditions passed on through the generations? Look at the Seder night as a model.

(To make this section fun for the younger kids, see "The Four Sons Models.") 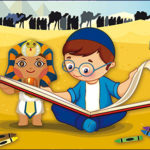