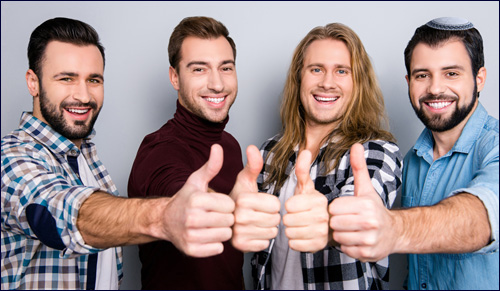 One young man, whose parents thought him wicked and simple, turned out to be truly wise and changed the course of history.

You may be surprised to learn that there was a major motion picture this year which in a profound way relates to the four sons of the Passover Seder.

The film was nominated for an Oscar for best motion picture and won one major award. And it teaches us an important idea about our different kinds of children – “the major players” we speak about in the Haggadah.

On the night dedicated to teaching our offspring, the Haggadah emphasizes what every parent knows: our children aren’t all the same. We have to recognize the differences and learn to deal with them. And we can all identify the categories. One is wise, one is wicked, one is simple, and one doesn’t even know how to ask a question.

But there is another possible meaning of this passage that gives us a completely different perspective and a powerful insight into parenting.

Let me tell it to you by way of an incredible true story of one boy whose life was filled with tragic difficulties. As an infant, he was abandoned by his mother. At the age of seven his father sent him away to a boarding school where his teachers called him the worst student in his class by far. The reports his parents regularly received from the Dean of the school said, “Your son seems incapable of learning anything.”

As punishment for his “stupidity” he was frequently beaten by his teachers. When it came time for him to attend a high school, a task made all the more difficult by virtue of his extremely poor grades, his father wouldn’t give him permission to go to the school he himself chose because he was certain that his son would only embarrass him there. Thankfully he was accepted to a military school, but his father wrote to him of his great discontent and called him “an impudent little idiot”.

When the boy wrote to his father to share with him his progress, the answer came back with words that might be expected to destroy his self-confidence for the rest of his life: “You are a constant disappointment to me. Not only are you a complete failure in everything that you do, but I see nothing ahead for you but failure. Please do not write to me anymore. I do not wish to hear from you ever again.”

He is the only man who was ever nominated for two Nobel Prizes at the same time, one for literature and one for peace.

And who was this young man, the son whose own parents thought him wicked and simple and not knowledgeable enough even to ask a question?

He was Winston Churchill, featured in the movie “The Darkest Hour” as the hero and one of the greatest leaders of the 20th century – the man who rallied the people of England to fight a war against Nazi Germany and whose speeches electrified and inspired a nation to preserve Western civilization.

In addition to being a courageous leader and an extraordinary orator, Winston Churchill was also a talented painter and a great historian. Of his many achievements, he is the only man who was ever nominated for two Nobel Prizes at the same time, one for literature and one for peace.

Who could have predicted that this son with an abusive father, a disinterested mother, insulting teachers, and ego-destroying deans and principals would turn out to be the wise son of the Haggadah?

Perhaps the Haggadah is teaching us that not only that every one of our children deserves an honored place at the Seder table, but more significantly, that we never truly know the potential within every child. As we recite the names of each of the four children, we preface their identity with the same word in Hebrew: “Echad – one.” One is wise, one is wicked, one is simple, and one is unable even to ask – because the Haggadah is emphasizing that these four different character types may in fact characterize one and the same person at different times. These are all one child at different stages of his or her development.

None of us are all wise or all wicked, all simple or all insufficiently knowledgeable to ask the right questions. We are an amalgam of traits, a fascinating combination of types. By understanding the various selves of our own being, by acknowledging our multi-faceted nature, we can have more compassion for others. We can have greater empathy for our children as they go through phases, some of which try our patience and others which give us a totally false impression of our offspring’s’ failings without awareness of their unique abilities and talents.

The “four sons” can really be one and the same child.

The great blessing of life is change. People grow and develop. They mature and become transformed. And sometimes people don’t actually change; you just never knew who they really were in the first place.

The “four sons” can really be “echad” – one and the same child, a child who at times can drive us crazy with apparent faults, but other times proud beyond words because of achievements.

So that’s why on Passover night “the Torah speaks of four sons,” reminding us to love, even when the four character types are all joined into one person.

And most important of all, to make sure that all of our children, no matter which “son” we think they are at the time, are welcomed and share in the family togetherness of the Seder table.

10 Ways to Gamify Your Passover Seder
It Takes A Lot Of Faith To Be An Atheist
How Instagram Brought Back This Nostalgic Soup
What Makes Eli Run?
Comments
MOST POPULAR IN Family
Our privacy policy