Four Sons and the Child Within 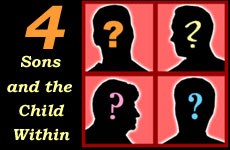 The Haggadah's Four Sons are really each of us, struggling to find our path in life and in the Jewish world.

King Solomon advises us to "educate the child according to his way." What this means is that every child is and must be related to in a way that befits his or her character. Our offspring are not mere replicas of ourselves, nor did they step off a page in the latest book on how to raise children. Moreover, there will never be another child who possesses the singular potential which we have been entrusted to nurture and polish.

The Wise Son asks: "What are these laws, statutes, and ordinances?"

When the Wise Son looks at Jewish life, he doesn't just see one monolithic mass of commandments. Rather, he breaks them down into various types and categories. The Wise Son has honed his perceptive skills and has learned to draw distinctions. In fact, the ability to be thoughtfully discerning is one of the hallmarks of wisdom.

Each and every one of us is the object of intense competition. Not only do manufacturers and advertisers compete for our attention, but there exist a host of would-be peddlers of ideas and values who vie for our time and energy, our support and commitment, our votes -- and, ultimately, our checkbooks.

Eventually everyone becomes a consumer. From the Wise Son we learn that one of the keys to freedom is becoming a thoughtful and discerning consumer, unless of course you don't mind being left with a bag of goods.

Since the Evil Son has excluded himself from the Jewish people, he has denied God.

When Jews in Ethiopia are in trouble, Israeli soccer fans in Tel Aviv, doctors named Greenfield and Schwartz in St. Louis, and Jews speaking Portuguese on the beaches of Rio all respond. In the last decade, Israel has absorbed almost one million immigrants, which is the proportional equivalent of the entire population of France suddenly relocating to the United States. To Israel's credit, with all the daunting social and economic strains this influx has placed on the country, never once has anyone of any political stripe even hinted that immigration should be slowed or halted.

What are we Jews anyway? Co-religionists, fellow nationals, compatriots -- or are we brothers and sisters? Born of one family and hewn of one stone? Are we bonded by a unifying relationship with God that is deeper than all which seems to divide us and render us strangers? And, could it be that when the rebellious son denies the quality of intrinsic Jewish connectedness, he not only turns his back on his brother, but on his Father as well?

You blunt his teeth... had he been there he would not have been redeemed

Every Jewish child, and that includes us all, must be forced to consider this: Either you're with us or you're not; you can't have it both ways. Tonight, the choice is ours.

Don't mistake our harshness for anger. We love this child as much as we love you and every one else at the Seder tonight. If we didn't care deeply about him we would have told him to take his cynical skepticism and go somewhere else for Passover -- but we didn't. Intent as he may be on hurtling himself into the oblivion of a pseudo identity, we will always remain eager to teach him. We may have to say a few things that are painful for him as well as for us; but sometimes there is no choice.

The Simple Son asks: What is this?

When your child asks you a simple question like, "Why does a magnet stick to metal?" what are you going to say? Or how about this one: "Why doesn't it ever snow in the summer?" Most of us who are omniscient in the eyes of our children find ourselves running for cover when these types of "cute" questions arise. "I'll be right back," we sheepishly assure them, as we are suddenly reminded of an urgent call that has to be made. "Why don't you turn on the Discovery channel...?"

You know why we don't have a lot of answers for our kids? Because we did what we now secretly hope they will soon learn to do -- we stopped asking questions. What a tragedy. We have sacrificed our youthful curiosity, our simplicity, if you will, on the altar of intellectual sophistication.

Inside each and every one of us lives a child of wisdom. We sense that there is more to Judaism than meets the eye. That what distinguishes a statute from an ordinance is more than just Jewish legal jargon, but rather a deeper set of ideas and spiritual constructs. That what separates one holiday from the next is not just the taste of seasonal delicacies, but distinctive opportunities for expanded consciousness. That under the rubric of Judaism is to be found something not only profound and insightful, but deeply personal and meaningful.

Inside us all there is a voice that wants the privilege of a fully panoramic view of Judaism -- To comprehend each facet of the Seder and how every nuance relates to the message of freedom, and the meaning of being a Jew. Listen to that voice. Refuse to sit there and just go through the motions. Be wise! Think, inquire and ask questions. Of Passover and its meaning for starters, and of Judaism and what it says about life as an encore.

If the wisest person in the world was at your Seder and you could only ask two questions -- one about Judaism and one about life -- what would those questions be?

And then there is the son who doesn't even know how to ask.

We act with a sense of urgency to free Jews in Russia, Syria, and Ethiopia. While on many fronts our efforts have met with success, there still exists another form of tyranny which must also incur the force of our wrath. This is the silent tyranny of ignorance. Ignorance, whether forced, induced, or knowingly chosen, is still ignorance. And if you don't know who you are then you are a slave.

My experience with Russian Jews tells me that when seated at a Seder table they will look at the matzah, Charoset, and everything else and ask -- "What is this?" I'm not so sure that those of us who had the privilege to be raised "in the land of the free" are really very different.

Consider this: of the five and a half million Jews in America today, less than two million belong to synagogues. If most of them received a Jewish education, then at best maybe 30 percent of American Jews have ever learned about Judaism. Add to this the fact that most of these "educated" Jews finished their education at the age of 12 or 13; that one million American Jewish children are today being raised as non-Jews, or with no religion at all; and that another six hundred thousand Jewish adults are now practicing other religions, and what you've got is a tyranny of ignorance of immense proportions.

To date, over half a billion dollars has been spent to build Holocaust museums, memorials, and libraries in this country. While honorable monuments to the dead are being erected, the living are quietly exiting the stage of Jewish history.

The Russians can leave, the Ethiopians are home, there may yet be some semblance of peace in the Middle East -- but it is still premature to lay down our arms and our cries for Jewish freedom. Because if you don't know who you are, you will never be truly free.

How would you respond to a young Jew who says, "All my life I never had any religion and I was very happy. Why should I start doing anything Jewish now?"

For the son who doesn't know how to ask, you must initiate it for him. As it says: "You shall tell it to your son on that day." (Exodus 13:8)

At this point the Haggadah reminds us of what we already know -- that we are all responsible for one another. Whatever you know, you must teach. Whatever you possess as a Jew, you must share. At the moment when you stand face to face with a Jew who doesn't even know what to ask, then the responsibility becomes yours. Whether this is a Russian child, your own child, the child of a neighbor... or the child in the mirror.

Passover: The Night of Protection

Haggadah: An Introduction
Vayelech 5783: Regret and Repent
Rabbi Sacks: Focus On the Important, Not the Urgent
Put Your Foot Down: Are Human Feet Poorly Designed?
Comments
MOST POPULAR IN Passover
Our privacy policy
Aish.com Is Looking for Great Writers